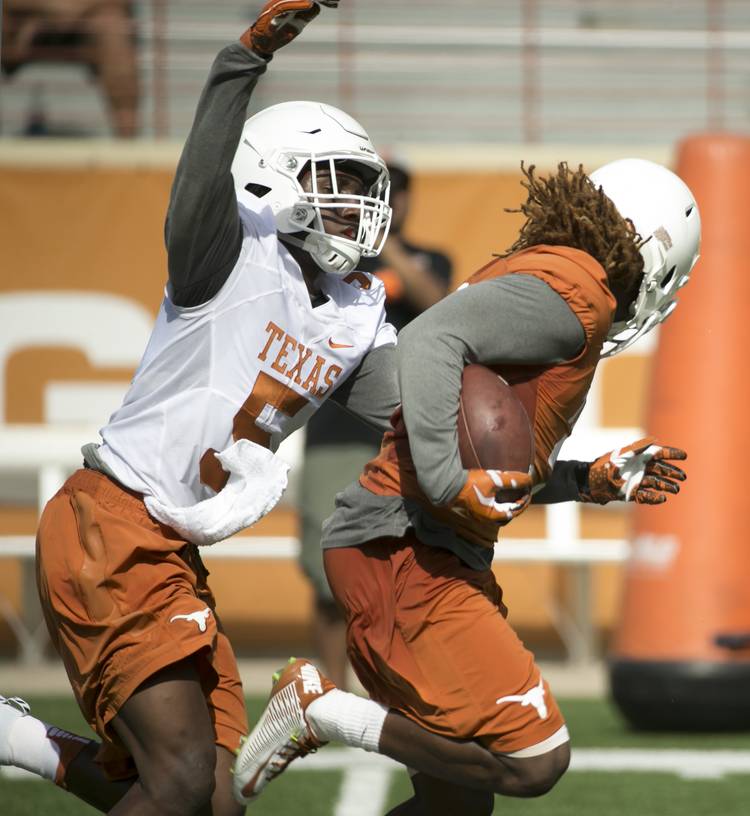 In 2015, Texas coach Charlie Strong signed 30 players for the nation’s ninth-ranked recruiting class. The excitement from that February morning continues this offseason, as roughly a third of the class — 11 members — are expected to emerge from this preseason as starters. Additionally, six more players are expected to fulfill key roles as reserves.

Seven others are floundering low on the depth chart, while six signees have left the program.

Here’s a look at the progression of the 2015 class:

Malik Jefferson, LB: Linchpin of the class is the Big 12’s preseason defensive player of the year. Will once again start at middle linebacker, but also will get opportunities as an edge rusher.

Anthony Wheeler, LB: He’s the presumptive favorite to replace Peter Jinkens on the weak side, but will have to withstand competition from 2014 signee Ed Freeman.

Holton Hill, CB: A supreme talent, but still gets beaten too often in practice.

Connor Williams, LT: Pound for pound, he’s arguably the team’s best player. North of 300 pounds after a productive offseason in the weight room, he now has the frame to dominate.

Patrick Vahe, G: One of three 2015 freshman All-Americans (Jefferson and Connor Williams were the others), Vahe holds the keys to the D’Onta Foreman/Chris Warren RB duo reaching its potential.

John Burt, WR: If he can become more than just a vertical threat, Burt will be All-Big 12 sooner rather than later.

Davante Davis, CB: Unsung, people soon will be talking more about Davis, who might be the team’s best defensive back.

Charles Omenihu, DE: If not the starter, he’ll get plenty of opportunities to disrupt the passer.

Tristan Nickelson, RT: A signing day project, the JUCO transfer has improved his body but has yet to sew up the job.

Michael Dickson, P: Hit from 60 yards the other day at practice and was consistently reaching 50 yards.

Chris Warren III, RB: Might as well be listed as a starter; he’ll get starter-like carries in a rotation with D’Onta Foreman.

DeShon Elliott, S: It’s on him to reach a consistent level of play and make sure Jason Hall and Dylan Haines aren’t overworked.

Brandon Hodges, OL: In position to be the first lineman off the bench. It helps that he’s showing versatility by getting reps at guard and tackle.

SEVEN THAT ARE TRYING TO FIT IN

Cameron Townsend, LB: Could get onto the field if for no other reason than depth issues at LB.

Kai Locksley, QB: Fifth-string QB might be better off somewhere else — at a new position or at a new school.

Buck Major, OL: At risk of being passed up by one or more of the six freshmen Texas brought in.

Quincy Vasser, LB: JUCO transfer can’t seem to find a home. Unless we heard wrong, Strong mentioned Vasser — who received reps at tackle last year — as a candidate at Fox.

Tristian Houston, RB: Buried under Foreman, Warren and Johnson, his path to the field is obscured.

Garrett Thomas, OT: Could be the next man up if something happens to Connor Williams.

Matthew Merrick, QB: If Jerrod Heard moves to WR full-time, Merrick could be the third QB. Not a bad spot to be in.

SIX THAT ARE ALREADY GONE

DeAndre McNeal, WR: Though not technically gone, McNeal is suspended for violating team rules. His status is in limbo.

Gilbert Johnson, WR: Member of the so-called Florida Five never made it to campus. Grades.

Devonaire Clarington, TE: A suspicious SAT score delayed his enrollment and he ultimately never made it to Austin. Since then, he detoured up the road at Blinn College, where he’ll try to resurrect his career and reboot his recruitment.

Du’Vonta Lampkin, DT: No mas. Unable to pass a Spanish summer course, Texas would not enroll Lampkin, who in turn spent last season sitting out at Oklahoma. His eligibility clock starts ticking this year.

Ryan Newsome, WR: A victim of too much competition at his position, Newsome announced his transfer before the start of this season. He’s now at Arizona State, where he’s reunited with former receivers coach Jay Norvell.

Cecil Cherry, LB: Talked a big game, but didn’t stick around long enough to back it up. Following a couple of practices last preseason — in which he was frequently chewed out by linebackers coach Brian Jean-Mary — Cherry headed back to Florida and enrolled at South Florida. He’s eligible to play this fall.

Texas countdown to football: The 5 most recent UT vs. Top 10 non-conference games