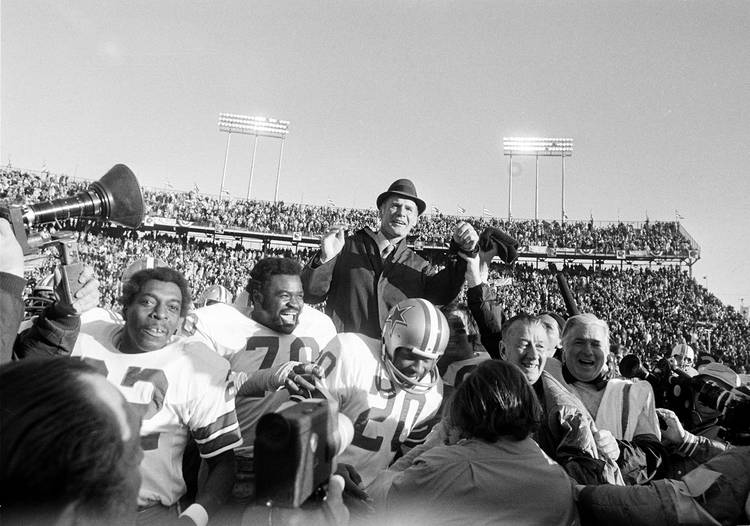 Bret Favre and a handful of others were inducted into the Hall of Fame last week, It was supposed to be capped off with the first NFL preseason game, but Canton had other plans.

The defensive lineman from Dallas Bryan Adams High School is in the Texas High School Football Hall of Fame after being a two-way all-district player and a high school All-American. In college, English was a force for a talented defense that helped Texas to two Southwest Conference titles. He was an All-American in 1974 and was named the team MVP. In 2011, English entered the College Football Hall of Fame.  English played for the Detroit Lions from 1975-79 and 1981-85 and went to four Pro Bowls. He is in the Lions Hall of Fame.

Sisemore played high school football at Plainview High School where he was a two-time All-District player on both sides of the ball. He went onto become an All-American offensive lineman for the Longhorns and helped the team to the 1970 National Championship. Then Sisemore was drafted by the Eagles in 1973 and played 12 years for the Eagles and earned two Pro Bowl appearances. He is member of the College and Texas football halls of fame as well as the Eagles Hall of Fame.

A few posts ago I made one Longhorn fan in the office roll their eyes when I floated the idea that Derrick Johnson could make a case for “greatest Longhorn linebacker ever.” As this Longhorn fan pointed out, most fans who know Longhorn history consider Tommy Nobis to be the greatest UT linebacker ever. And it’s hard to top Nobis. The San Antonio Jefferson High School alum known as “Big Red” averaged 15 solo tackles game as a senior and was All-District, All-City and All-State player. He was named the top high school lineman in the state of Texas during the 1960s by Dave Campbell’s Texas Football magazine. At Texas, Nobis helped the Longhorns to the 1963 National Championship and won the Maxwell and Outland awards. He was named to Sports Illustrated’s College Football All-Century Team.

Then he was drafted No. 1 overall by the Atlanta Falcons. In Atlanta, Nobis went to five Pro Bowls in 10 seasons and earned the nickname in “Mr. Falcon.”

Hailing from Mission High School, Landry was “All-Regional.” He went to Texas, then the war happened so he joined the Air Force, returned to Austin and went on to be a co-captain of the football team in 1947 and 1948. He was the punter and a defensive back. Then he gave coaching a try and went on to become one of the greatest and most influential football coaches in the history of the game, leading the Dallas Cowboys for decades until Jerry Jones… we won’t mention it.

One of two Longhorns to make the hall of fame at every level. Campbell is a Heisman Trophy winner and was the all-time leading rusher at Texas for more than 20 years until Ricky Williams surpassed him. He rushed for 4,443 yards in college. In high school, the “Tyler Rose” led Tyler High School in rushing and went for 2,036 yards rushing during John Tyler High School’s 15-0 state championship season in 1973. He was named the high school football player of the decade for the 1970s.

In the NFL and after being drafted No. 1 overall by the Houston Oilers, Campbell rushed for 9,407 yards and 74 touchdowns, making five Pro Bowls and winning Rookie of the Year. He needed just eight season to have a Pro Football Hall of Fame career. In 1999 (really, it took 14 years for this to happen?) Campbell was inducted into the Tennessee Titans/Houston Oilers Hall of Fame.

Layne came from Highland Park High School where his teammate was Doak Walker, the Doak Walker. He became a star player for the Longhorns in the 1940s, where he helped Texas to a conference title.  The All-American left campus holding 11 team records.

In the NFL he led the Lions to four division titles and three NFL titles in the 1950s (think of him as the 1950s version of Tom Brady) in 1952, 1953 and 1957. His last-second touchdown pass in the 1953 NFL title game against the Cleveland Browns is one of the most famous plays in Lions history as the team won 17-16. He was the NFL scoring champ in 1956 and was All-NFL two times and second team four times. He played 15 seasons in the NFL.

Texas countdown to football: 5 players from San Antonio to remember