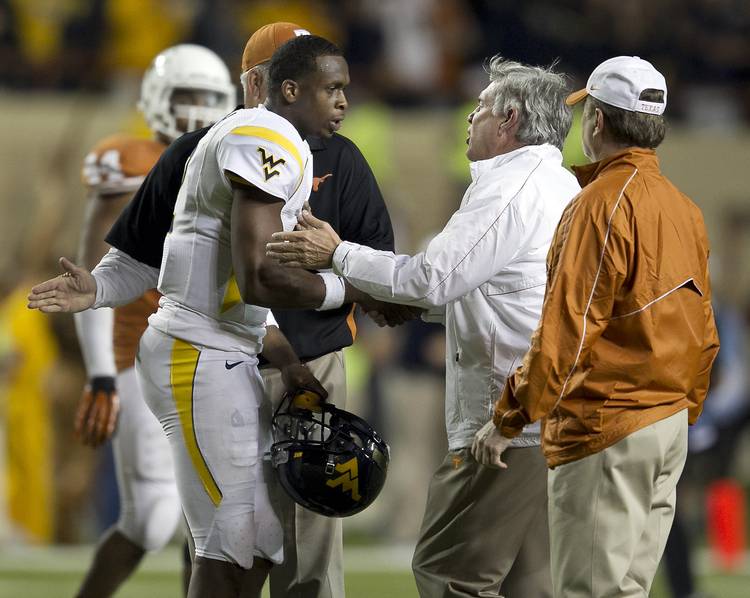 Royal-Memorial Stadium has undergone many, many expansions and changes since opening in 1924. The latest expansion came in 2009, when stands were added in the south end zone that raised the capacity to 100,119.  But what are the biggest crowds ever to see the Longhorns play in Austin?

Here are the five largest crowds in DKR history:

Senior night. Colt McCoy’s last game at DKR. He threw for 396 yards in the win.

It does feel a little weird, though, knowing that at one point a Kansas football game was the best attended home game in Texas football history. There was a time, we swear, when Kansas football wasn’t terrible. In 2007, the Jayhawks went to the Orange Bowl and won. During coach Mark Mangino’s tenure, Kansas actually had strong seasons. But that was ending in 2009, along with Mangino’s employment. The coach would eventually lose his job that season.

More important, though, this was the win that handed No. 3 Texas its first Big 12 regular-season football title since 2005. It was McCoy’s record-tying 43rd win as a starter. Texas went on to play in the BCS national championship game.

Not a good day for the Longhorns. In front of the largest crowd in DKR history at the time, the No. 7-ranked Longhorns, 3-0 entering the game, showed that the up-and-down performances leading to this weekend were troubling signs, not early season kinks. Texas allowed 264 rushing yards. It was the first home loss for the Horns since 2007 and their fewest points scored at home since 2006.

Texas was coming off a brutal 40-21 loss at BYU and changed defensive coordinators during the week. The change didn’t work. Ole Miss, which had lost to Texas 66-31 the year before, piled on in Mack Brown’s final season at Texas. David Ash was hurt and Case McCoy filled in, but it didn’t matter. Bo Wallace threw two touchdown passes for Ole Miss, and Jeff Scott ran for 164 yards.

After going 5-7 the year before, Texas entered the 2011 season with some renewed spirit, and so did the fans. The second-largest crowd in DKR history saw Texas  gain 506 yards in the season-opening romp over the Owls. Malcolm Brown rushed for 87 yards, the most by a true freshman since Jamaal Charles in 2005. Texas won four games to start that season before losing 55-17 to Oklahoma. This was the first game to air on the Longhorn Network, so considering this was, at time, the largest crowd in DKR history, the ratings might have taken a hit.

The largest crowd in DKR history saw Texas lose in West Virginia’s first trip to Austin as a member of the Big 12. Future NFL draft pick Geno Smith threw for 268 yards and four touchdowns in the No. 8-ranked Mountaineers’ win. But it was Andrew Buie’s 207 yards rushing that killed the Longhorns’ chances. Texas trailed 21-7 in the second quarter but led 28-27 at halftime. West Virginia took a 10-point lead with 1:18 left, and David Ash led Texas down the field to cut the score to 48-45 with 15 seconds left. But the Longhorns couldn’t get any closer.