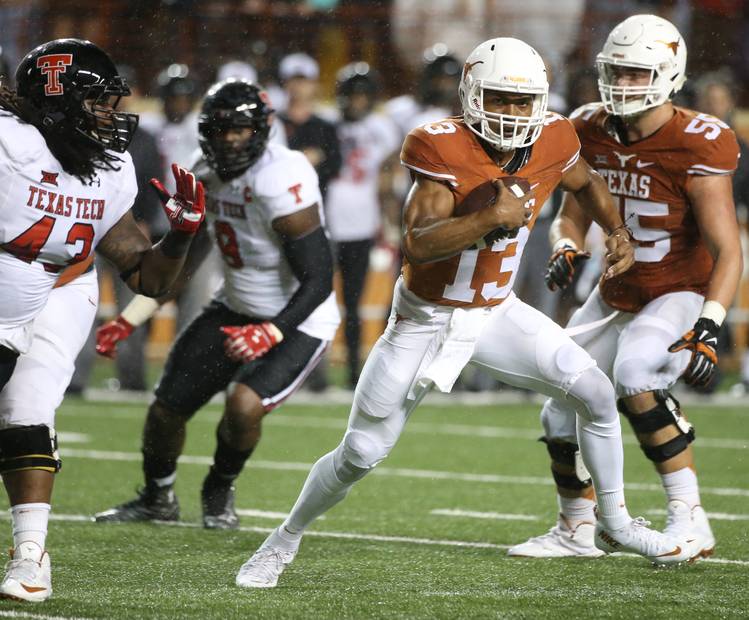 As the Tyrone Swoopes vs. Shane Buechele saga drags on, there remains a mystifying question about the Texas quarterback battle.

With an infectious personality that pumped life into the program, Heard started 10 games last season. But suddenly this August, the sophomore found himself third on the depth chart, and Texas coach Charlie Strong approved his position change to receiver. This came not long after Strong said he wanted three quarterbacks.

There are two primary reasons why Heard changed positions, according to two sources familiar with Strong’s decision. Heard simply hasn’t progressed as a passer as much as the coaches had hoped. But his athleticism is undeniable, making it difficult to keep him off the field completely.

“Jerrod was battling in there for the quarterback position, and he said to me, ‘Coach, I can be the backup at quarterback, but I want to play,’” Strong said.

“So I said, ‘OK, big boy, you tell me where you want to play.’ And he asked me if he could go play wide receiver. Most certainly you can.”

Heard has not been made available to reporters since November. His only public comments have been often-times cryptic social media posts. Those who know Heard have said he’s difficult not to like. Perhaps that’s why teammates appear to be fully supportive of the position change.

“I feel like this is a good spot for him now,” receiver John Burt said.

Safety Kevin Vaccaro joked that he couldn’t wait to light up Heard whenever he comes across the middle in practice. “Jerrod, he’s an athlete, as everyone knows,” Vaccaro said. “Obviously, he’s really fast and he has the size.”

Isolate Heard for a moment within the context of the UT football program, and look at his sheer individual numbers. Heard completed just 57.9 parent of his throws last season for 1,214 yards with five touchdowns and five interceptions.

“He didn’t need to (play),” Walsh said last October. “Mentally, I didn’t think he needed to. And I still think right now, you have to be careful with him. And they are. You can tell they’ve simplified a lot of things.”

At one point last season, Heard went four consecutive games without throwing for 100 yards — the low point being a 26-yard outing in an embarrassing 24-0 loss at Iowa State. That has nothing to do with a linebacker “spy” or being unable to read the defense. Heard simply missed on his throws.

The excitement over the Cal performance was long gone when November rolled around. Heard was regressing as a passer, it was thought. He completed only 13 passes against Kansas and 11 against West Virginia. Heard was sidelined against Texas Tech with a concussion and missed most of the regular-season finale against Baylor.

Consider Trevone Boykin’s journey at TCU. Boykin completed 57.2 percent of his passes as a freshman and 59.7 percent as a sophomore. The Horned Frogs changed their offensive system, and Boykin’s completion percent edged up slightly (61.2 percent as a junior). But he threw 33 touchdowns in 2014 and 31 in 2015.

This is where Heard’s place in the UT ecosystem comes into play. Sure, the Longhorns could keep Heard as the starter. But Buechele, a freshman, arrived on campus as a more accomplished passer. Texas also has Westlake senior Sam Ehlinger, who is committed to the Longhorns, waiting in the wings.

Strong insisted that Heard is getting practice time at quarterback and receiver. The coach also made it clear that Heard will likely be on the field in the season opener against Notre Dame as a receiver.

Some UT insiders believe Heard’s long-term path to the NFL is at receiver anyway. Considering that Ryan Newsome and DeAndre McNeal have transferred and Lorenzo Joe (hamstring) is injured, there are spots available in the slot.

To say that Heard won’t play a key role going forward is a mistake. It’s simply going to be a different role.

“He was all smiles about it and went out and has competed and is doing an unbelievable job,” Strong said. “When you see that change of attitude, now your team is headed in the direction you want them to go.”

Here's a look at Jerrod Heard's season at quarterback in 2015.