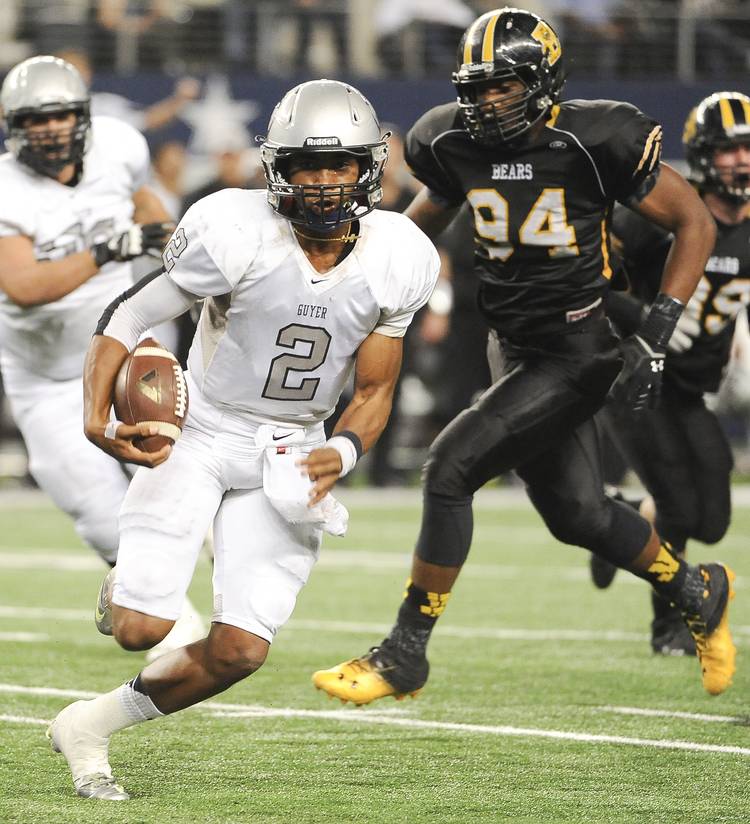 Texas high school football teams are knee-deep in practice and soon the Friday Night Lights season will begin. So who on Texas’s current roster had “the best” Texas High School football career? This is a tough question because most of the players received all-district, all-state and national recognition. We’re going take into account all that, plus extra things like: did they win state titles? Did they set or break any state records?

In 2011 against Tom Bean High School, Tyrone Swoopes rushed for 560 yards in a game. It’s the second best rushing game in Texas history. He was one of the top quarterbacks in the nation coming out of high school. He finished his career with 5,341 rushing yards with 73 touchdowns and 3,850 passing yards with 41 touchdowns. He went 1-9 his senior season, but was 10-1 as a sophomore and 7-4 as a junior.

Oliver was a 2013 Parade All-American, 2013 U.S. Army All-American Bowl participant and a three-time Class 5A All-State selection. He was the No. 16-ranked player in the Austin American-Statesman’s Fab 55 list and was named the best receiver in Texas by Dave Campbell’s Texas Football. He has the second most receptions in Texas high school football history with 308. The 6-foot-3-inch, 215 pound junior finished with 4,567 yards receiving with 56 touchdowns. He graduated as the all-time receptions leader in Texas high school football history. His team went 9-3 his senior year, losing to Longview in the area round of the playoffs in 2012.

Kyle Porter rushed for 1,938 yards and 36 touchdowns as senior in 2015 for the undefeated Katy team that demolished just about every team it played en route to state championship. He had one game last season where he scored five touchdowns in the first half. Porter helped Katy to four straight state championships games and two state titles during his career. In the 2015 state championship game against Lake Travis, Porter rushed for 188 yards and was named the Offensive MVP of the game. He rushed for for 1,914 yards and 23 touchdowns his sophomore season. His junior year he did look human, rushing “for only” 1,051 yards and 16 touchdowns on just 149 carries. Porter was All-State, All-American and All-District player during his career and a top running back prospect in Texas.

Jefferson was the high school Butkus Award winner in 2014. He was one of the highest rated recruits in the nation and the No. 1 outside linebacker according to various recruiting sites and was No. 1 on the Austin American-Statesman’s Fab 55. As a senior he had 81 tackles and six sacks with 16 tackles for a loss. He helped Poteet to a 10-2 record his senior year. The Parade All-American also blocked four kicks his senior year. He was even better as a junior, when he had 93 tackles, 18 for a loss, and 14 sacks. He also wasn’t bad a sophomore, registering 105 tackles, 24 for a loss, and seven sacks. Poteet never missed the playoffs with Jefferson on the roster.

Heard was 36-8 (one loss was a forfeit) as Guyer’s starting quarterback. He led his team to back-to-back Class 4A, Division I championships. He was named All-Area by the Dallas Morning News and was a District MVP. He was a highly-ranked prospect by most recruiting sites, and was the No.1-ranked Texas quarterback of his class via Dave Campbell’s Texas Football. As a senior he threw for 2,148 yards with 22 touchdowns and rushed for 2,172 yards and 28 touchdowns. He had at least 100 yards rushing in 12 games his senior year.  In the 2013 state championship game against Northside Brennan he was 9-for-9 with 95 yards passing with a touchdown with 159 yards rushing and two touchdowns as he won his second championship game MVP. In 2012 he was the DCTF Offensive Player of the Year. He rushed for 1,138 yards and 35 touchdowns while passing for 1,090 yards with 17 touchdowns.

In the 2012 championship game, he led Guyer to one of the best comebacks in recent state football history. Down 16 points to Georgetown High School, Heard led the comeback and scored five touchdowns in the game.

Overall, Heard was 28-4 during his junior and senior years.  As a sophomore he passed for 2,286 yards and 28 touchdowns. Heard was also a 2014 U.S. Army All-American Bowl player.