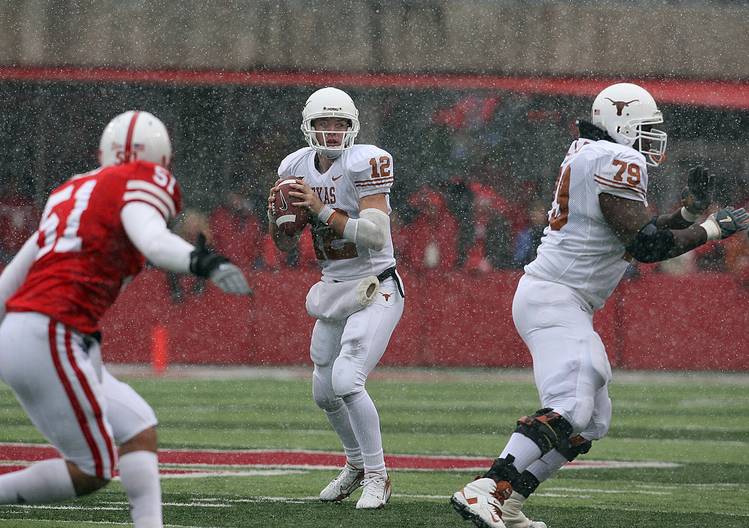 So 11 years ago Colt McCoy joined the Texas Longhorn roster. Then he redshirted, Texas won the national title and McCoy took over in 2006. Ten years later, McCoy still owns just about every freshman passing record, including one record (29 touchdowns in a season) we don’t think will be broken. Let’s take a walk down Colt McCoy Lane.

McCoy threw the fourth most passing yards by a freshman in a single game when he tallied 346 yards on 23-of-29 passing with thee touchdowns and no interceptions. Texas led 17-0 in the second quarter and never looked back as the No.4 team in the nation improved to 9-1 on the season. This would be the last regular season game the 2006 team would win as Texas lost to Kansas State 45-42 and Texas A&M 12-7 the next two weeks.

Colt McCoy sets the freshman single-game touchdown record with six as Texas bulldozes the Bears. Earlier that week Baylor corner back C.J. Wilson predicted a “I-35 Surprise” as the then 2-0 in Big 12 play Bears looked for the upset. After scoring on a 67-yard passing play to start the game, that looked possible. Baylor then led 10-0 after one quarter, which makes the final score so jaw-dropping. Texas scored 63 points in three quarters. McCoy finished with 275 yards passing and completed touchdown passes to four different receivers.

The weather was terrible and this game is remembered more for walk-on kicker Ryan Bailey’s game-winning kick and Mack Brown reportedly telling him: “You’re the luckiest guy in the world. You’ve got a chance to be Dusty Mangum on your first kick.”

Bailey hit the game-winner from 22-yards out with 23 seconds left in the game. But it was McCoy who orchestrated a dive that put Texas on the 5-yard line. Driving into the wind. It was an eight play, 39 yard drive set up by Texas fumble recovery. McCoy hit Quan Cosby on a slant to put them near the 20 yard line with about a minute and half left. He ran the ball to the five, then tried a pass that was incomplete and eventually gave way to Bailey’s kick.

McCoy was 25-for-35 with two touchdowns and 220 yards in a game that featured 20 mph winds and snow.

Colt McCoy went 3-1 against Oklahoma and this was the first win. It was the first win over a rival of any kind– unless some Texas fan thinks North Texas, Rice, Iowa State and Sam Houston State are rivals– for McCoy. Texas was ranked No. 7 at the time and Oklahoma No. 14. McCoy wasn’t particularly impressive going 11-of-18 for 108 yards, but he still threw two touchdowns in the win.

Colt McCoy became the all-time freshman leader for touchdowns, passing yards and wins in the bowl game with Iowa. He threw a 72-yard pass to Jamaal Charles (fifth longest scoring throw for a freshman) and finished 26-for-40 with 208 yards with two touchdowns and no interceptions. He had suffered a pinched nerve in the last two games of the seasons, but was cleared to play in the bowl game. At the time his 29 touchdowns for a freshman was tied for the all-time NCAA record. What’s more is he beat a veteran Big 10 quarterback, Drew Tate, in the process. It was the third straight bowl win for Texas.

Here’s the end of the game:

Texas countdown to football: 5 biggest wins Texas had over a private school