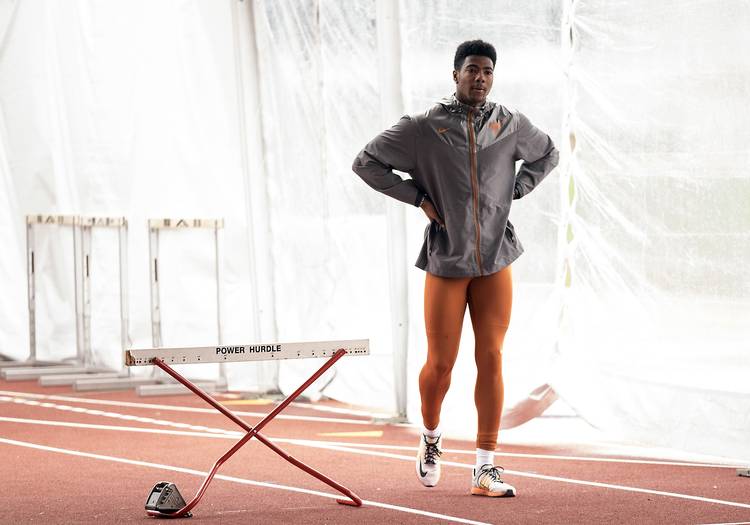 Texas' John Burt is spending this spring running hurdles with the UT track team, just like he has the past couple of years. (RODOLFO GONZALEZ/ AUSTIN AMERICAN-STATESMAN)

No matter what the Texas coaches had planned Monday night, chances are John Burt was slightly distracted by the Olympics.

NBC was broadcasting the opening round of the 110-meter hurdles live from Rio de Janeiro. The key American storyline was Oregon’s Devon Allen, a two-sport star for the Ducks. And sure enough, the NCAA champion advanced in his heat in 13.41 seconds.

“He was in football meetings last night, so he didn’t see it live,” said Burt’s mother, Tonja Matthews. “But we were texting back and forth.”

Someday, possibly in 2020 when the Olympics reach Tokyo, Burt will be there, too.

“I’m really excited to see the competition that awaits me and everybody else,” Burt said last week. “The anticipation is killing me.”

But for which sport? Football or track?

In Burt, the Longhorns have one of those truly dynamic athletes that don’t come around often. On the football field, Burt is usually praised with a baseball analogy — he’s a “home-run threat” at receiver. On the track, the 6-foot-3 Florida native is already one of the Big 12’s best hurdlers.

Yes, he is excited about Sterlin Gilbert’s new offense. He led the Longhorns in receiving yards (457) last season and wants to run more intermediate and shorter routes this year. No, he doesn’t care who gets named the starting quarterback. The season opener is weeks away… blah, blah, blah.

Truth be told, Burt may rather be in Rio this month.

“We’re here, but John Burt is having an Olympic experience,” said Texas assistant coach track Tonja Buford-Bailey, who guides the sprinters and hurdlers. “He’s seen the process and can watch on TV and say, ‘I trained with that girl or that guy.’”

Buford-Bailey’s phone crackled with noise during her phone interview from Rio. Sounded like a great time, indeed. She was with several other UT athletes and happily passed on info about what was happening in Austin. (It’s hot here; cool there.)

The mere mention of Burt gave Buford-Bailey, a three-time Olympian herself, a turbo boost.

“Everybody’s a high school star to even compete at this level,” said Buford-Bailey, the 1996 bronze-medal winner in the 400-meter hurdles. “You are expected to win, expected to do well. He was thrust into an environment of people who were really seasoned. He didn’t panic or give up. He kept fighting to get his times down.”

Burt came to Texas accomplished in football and track. He was a junior-varsity quarterback in the ninth grade, but eventually became a four-star receiver. Rivals labeled him the 11th-best receiver prospect in the nation after averaging 23.4 yards per catch as a senior.

He was an all-everything sprinter, running the 100 and 200 meters, not to mention the 110- and 300-meter hurdles. Burt tried the high jump, the triple jump and, of course, ran on the 400-meter relay team at Tallahassee (Fla.) Lincoln.

Burt ultimately chose Texas for its football and track programs. It helped to have family on campus. Burt’s aunt, Phaedra Abbott, is a senior program coordinator in UT’s School of Undergraduate Studies. His grandmother, Barbara White, was the dean of the School of Social Works for 18 years. “He’s been a Longhorn for a very long time,” Matthews said.

Burt admitted he had to adjust to higher hurdles at Texas. Collegiate hurdles are 42 inches high compared to 39 inches in high school. Still, he finished second in the 110-meter hurdles at the Big 12 outdoor track and field championships, scoring eight points as a freshman.

That’s a long way from a disappointing start in January, when Burt ran the 60-meter hurdles in 8.61 seconds at the first indoor meet of the year.

“I was at his first indoor track meet in College Station,” Abbott said. “He didn’t perform well. He does not like to not do well.”

Just getting to the NCAA outdoor championships in June was an accomplishment in itself. Burt posted a 14.32 in the semifinals in Eugene, Ore. Allen ran in 13.38, for comparison.

“I just think it helps tremendously if you can go to another sport and go participate,” said Longhorns football coach Charlie Strong, a long-time supporter of football athletes running track. “And especially what John did, to score points, he was a great asset to the track program.”

Sprinters are thought to be like Ferraris. Sleek, but fragile. Burt doesn’t mind getting knocked around by defenders, though. In fact, on the first day of football practice, Burt went streaking down the sideline and made a diving, sensational catch. He got up, held the ball aloft and flipped it loose in show-stopping style.

Sure, Burt can go the distance, as evidenced by his 69-yard touchdown catch against Rice and his 84-yard score against Kansas. But he wants to become a complete receiver, one known for going over the middle and catching balls in traffic.

“Even in the spring while I was still running track, I could already feel that I was faster on the field when running my routes and that sort of thing,” Burt said. “Yeah, I think track really helped me in that area.”

Former Texas coach Mack Brown once excused Marquise Goodwin from football to compete in the long jump in the 2012 Olympics. Goodwin came back and had 26 catches his senior year and became a third-round draft pick by Buffalo.

Goodwin just missed qualifying for the Rio Games by finishing seventh in the long jump (27 feet, 3/4 inches) at the Olympic trials. He’s still with the Bills, having made 20 catches in 24 games.

“I kind of wanted to model my college career after him,” Burt said. “I kind of look up to him.”

Right now, Burt is looking up. There’s no ceiling in sight.

Texas countdown to football: 5 biggest wins Texas had over a private school

Texas countdown to football: The 5 best games Charlie Strong has ever coached in