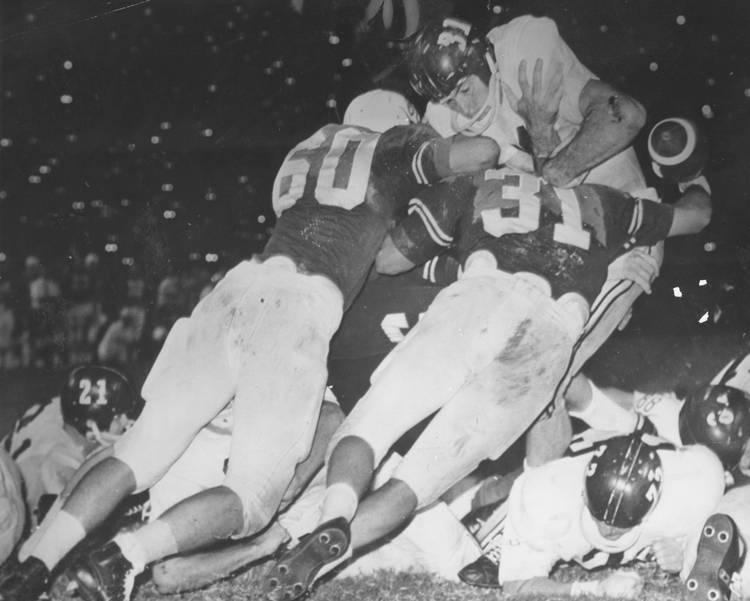 During this countdown we’re going around the state to point out the best players from major areas of Texas.

We’ve been to Houston.

Traveled to the Alamo

Now we’re going to “Keep it Weird” and get lost in the Texas Hill Country.

Here are the five Longhorns from Central Texas to remember:

Shearer was on the Austin American-Statesman’s All-Central Texas team as a junior and senior as the defensive lineman emerged as a top recruit for the Chaparrals. This was before Westlake became an area power and Shearer’s teams didn’t make the playoffs his junior or senior year. But once he got to Texas, Shearer was a two-time All-Southwest Conference defensive tackle and was named the SWC Defensive Player of the Year by the Dallas Morning News and Houston Post in 1977. He won the Outland Trophy the same year and was a Lombardi Trophy finalist. Shearer played for the Chicago Bears from 1978-1980 and was inducted into the Texas Ring of Honor in 1989.

Nicknamed “Lam” by Darrell Royal because he was from Lampasas and Johnny “Ham” Jones was from Hamlin, Lam Jones was a track star for the Badgers and also scored 45 touchdowns over his last two seasons. He also won a gold medal in the 1976 Olympics in the 400-meter relay! At Texas he was a two-time All-American receiver who graduated as the program’s all-time leading receiver in touchdowns with 14. Jones was selected second overall by the New York Jets in the 1980 NFL Draft and signed one of the largest deals, at the time, in NFL history: $2.1 million  contract. He played just five seasons, mainly due to injuries, and finished with 13 career NFL touchdowns.

Treadwell was captured in one of the most famous photographs in Texas history (see above) when he stuffed Arkansas fullback Danny Brabham at the goal line as No. 1 Texas beat Arkansas, then No.6 in the nation, 7-3 in 1962. He was a two-time All-American guard and linebacker and is a member of the Texas High School Football Hall of Fame (as is everyone on this list). He was a two-way player at Austin High and the Austin American-Statesman once wrote that he was “one of the best two-way football players in Texas schoolboy history.”

Treadwell was inducted into the Hall of Honor in 1985. He later practiced as a veterinarian for 37 years. Treadwell died in 2014.

When Shipley graduated he held the Texas high school football records for: receptions (264), receiving yards (5,424) and receiving touchdowns (73). He took his team to back-to-back state championships games and had a record of 28-2 in his final two seasons, where he was coached by his dad, Bob Shipley. He was All-State as a junior and senior. As a freshman playing in his first high school game he had 454 all-purpose yards. He went on to team with Colt McCoy at Texas and left the Longhorns as the all-time leader in receptions (248). Only Roy Williams has more receiving yards and touchdowns. Shipley, who was well-known for being McCoy’s college roommate, holds the Texas records for most receptions in a game (15), most receptions in a season (116), most receiving yards in a season (1,485) and most touchdown catches in a season (13). I guess Colt couldn’t throw him four more touchdowns to surpass Williams as the all-time leader (Williams has 36 touchdowns).

Shipley’s NFL career was promising at the start, and the Cincinnati Bengals even sold his jersey that this writer/Bengals fan sometimes thinks of buying on eBay. But Shipley suffered an ACL injury early in his career and was never the same player.

He seems to of found a new passion. Or not?

Johnson is one of the greatest Longhorn linebackers ever, but before that he had a Texas High School Football Hall of Fame career. He as one of the most dominant linebackers in prep football of the last 20 years. He received All-State honors and finished with 327 tackles, 34 for a loss, 11 sacks, 10 forced fumbles and four interceptions in just two season. Two seasons! He was a two-time Parade All-American and one of the top prospects in the nation. He had a standout freshman season at Texas and went one to become a two-time consensus All-American and the 2004 Duck Butkus Award and Bronco Nagurski Award winner. He is third all-time in Texas history with 458 tackles and his 65 tackles for a loss is most in program history.

In the NFL he’s become one of the league’s top linebackers, and sportsman, and has been to the Pro Bowl four times.

Texas countdown to football: The 5 best games Charlie Strong has ever coached in