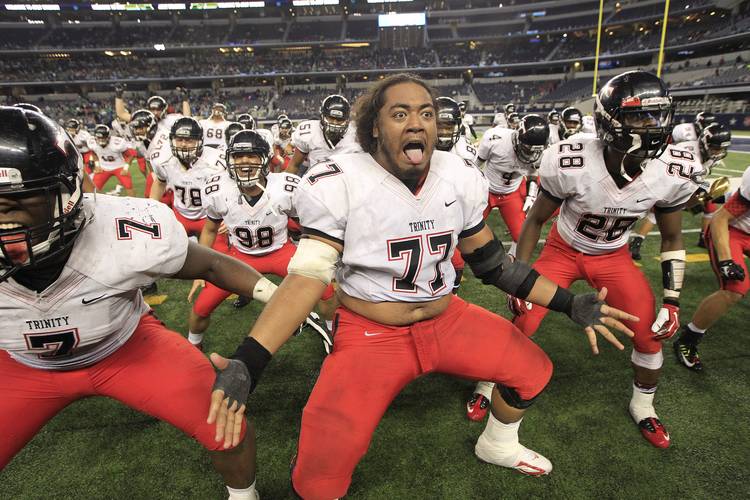 Excluding those schools, what are the other five?

*Mesquite Poteet would have made it 10, but someone transferred last week.

Sophomore linebacker Edwin Freeman and freshman Tope Imade both hail from the Dallas area’s Bowie High School. Freeman is a redshirt sophomore starting this third year on campus and was once the No. 128 overall prospect in his class and the No. 7 outside linebacker in then nation. He helped Bowie to a 7-4 record in 2013 and 11-2 in 2012. Imade is a two-time All-State and All-District selection at Bowie and had 81 pancake blocks as a senior. He holds a Bowie record with a 515-pound deadlift.

Don’t let the name fool you. Freshman quarterback Shane Buechele went to Arlington Lamar. This is Houston Lamar, and they produced two talented defensive backs. John Bonney was a four-year starter at Lamar, coached by Tom Nolen, and was a three-time All-District honoree. Bonney played in all 12 games last season as a redshirt freshman and had nine tackles last season against Texas Tech.  In high school, he was the No. 22-rated safety in the nation by 247 Sports. Holton Hill is also from Lamar. Hill was a 2015 All-Big 12 honorable mention and played in all 12 games for the Longhorns last season. He started eight games as a true freshman and had 49 tackles. In high school, Hill was not only a talented player receiving national All-American honors, but he was also a one of six finalist for the 2015 Watkins Award which goes to the top African-American male high school scholar athlete. He was a 2014 MaxPreps All-American and was the Greater Houston Defensive Player of the Year in 2014. He led the state of Texas with 11 interceptions his senior year as Lamar went 10-2.

Plano doesn’t have a scholarship player on the 2016 roster, but sophomore walk-on Tim Yoder does have a cool Hudl video:

Meanwhile another Plano High alum and walk-on is Philipp Moeller, who was born in Germany but grew up in Plano.

Yes, he too has a Hudl video (celebrate the walk-ons!):

Junior safety Jason Hall has started 18 games for the Longhorns since arriving on campus. The No. 49-ranked senior in his class was an All-State player at SGP. Meanwhile, walk-on Garrett Graf made 31 consecutive starts for SGP and was a two-time All-District player. He’s yet to play for the Longhorns, but was a member or the Big 12 Commissioner’s Honor Roll in spring 2016.

Does he have a Hudl video? Of course (Seriously, walk-ons are important):

In 2014 Trinity High School went 12-2 and reached the state quarterfinals, but ran into eventual state champion Allen. Two Longhorns played roles on that team. Patrick Vahe, a 2015 freshman All-American for Texas, was the standout recruit and anchor on the offensive line. He was a two-time All-State selection and was the No. 90-ranked player nationally in his class. Freshman Chris Daniels was on the other line playing defense for Trinity. He was All-State his senior year and was a two-time All-District selection. He was one of DCTF’s “2016 Texas’ Best” selection and was No. 19 on the Austin American-Statesman’s Fab 55. Trinity went 10-1 his senior year.