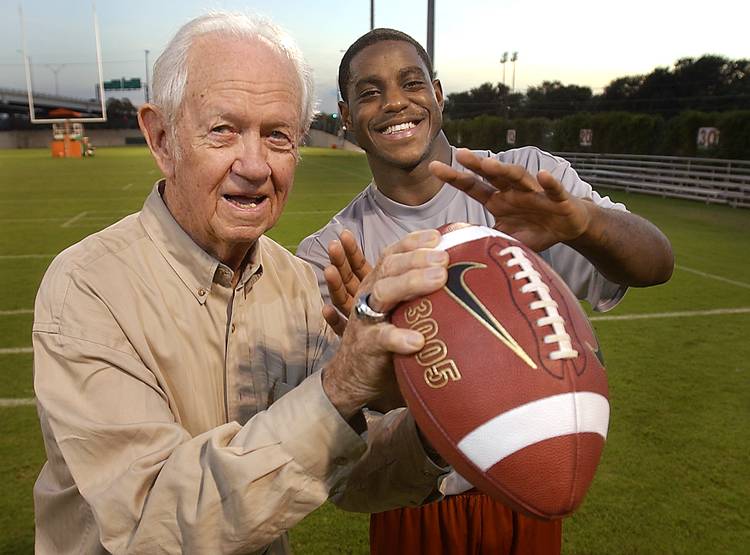 Royal-Memorial Stadium opened in 1924. It’s gone through multiple changes over the years and seen some huge crowds in its day. With a top-10 ranked Notre Dame team coming to DKR next month to start the season, we’re wondering: what are the best games ever played at the stadium?

Houston beat Texas 47-9 in 1989. A year later, with the Cougars rolling along and trying to win a title, Texas thumped Houston 45-24 and the Longhorn fans, after enduring two consecutive losing seasons, tore the goal post down after the game.

Ricky Williams broke the NCAA All-Time rushing record and Texas kept the Aggies out of the national championship picture with this game. Kris Stockton kicked the game-wining field goal with 5 seconds left and Texas won 26-24. It was Mack Brown’s first season and his first win over the Aggies. Read more here.

Trailing Arkansas 13-7 with less than a minute left in the game, Jack Crain caught a pass and turned it into a 67-yard touchdown. Fans rushed the field before the extra point was kicked and once the field was cleared Crain converted the extra point and Texas beat Arkansas. This has been dubbed “The Renaissance Game” as it’s credited with revitalizing the football program that had four straight losing seasons including a 1-8 year in 1938.

The Longhorns were undefeated entering the game and hosting the Razorbacks. Johnny Treadwell and Pat Culpepper teamed-up for a game-saving tackle at the goal line that forced a fumble. Texas took over and drove 90 yards for the winning touchdowns. It’s known among Texas fans as “The Tackle.” Here is one of most famous photos in Texas football history:

The Aggies entered the game as the defending national champions and were one win away from heading to the Rose Bowl. Texas coach Dana X. Bible handed players this poem by Edgar Guest and read it to them before the game:

What followed was Noble Doss’ “impossible catch” that gave the Longhorns a 7-0 win.