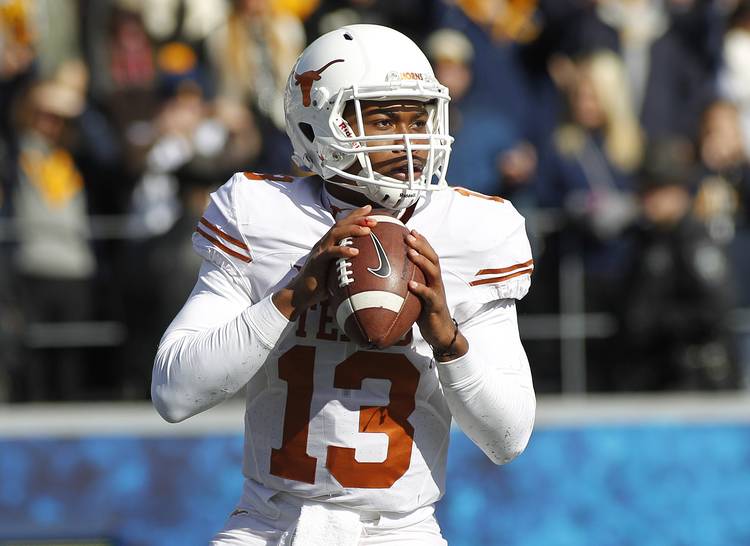 Jerrod Heard of the Texas Longhorns drops back to pass in the first half against the West Virginia Mountaineers during the game on November 14, 2015 at Mountaineer Field in Morgantown, West Virginia. (Photo by Justin K. Aller/Getty Images)

Heard had not spoken to reporters since news broke earlier in August about his new role. The sophomore started 10 games at quarterback last season but is now lining up in the slot.

“I didn’t fight nothing,” Heard said Tuesday. “Really, I was ready for the transition myself. I felt like it would be a positive thing for me and my future. I was all for it and ready to go.”

For Heard, the mere idea of sitting on the bench had to be unbearable. He won two state titles in high school and played a key role with the Longhorns last season. If Heard didn’t change positions, he likely would have been anchored to the sideline as life rolled on.

Heard said he’s studied some other former quarterbacks who reached the NFL as a receiver. That’s a career track Heard can see for himself.

As for who should start at quarterback, Heard couldn’t choose between Tyrone Swoopes and Shane Buechele.

“I’d like to see all three of us run out there,” he joked.

Texas’ Sheroid Evans — cornerback, fashion designer — is all stitched up for sixth season

Texas countdown to football: 5 good, bad and ugly stats from 2015 to remember