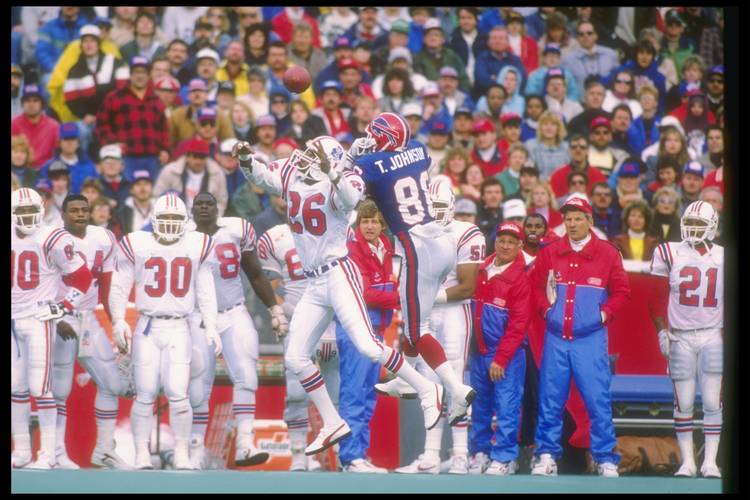 Defensive back Raymond Clayborn of the New England Patriots (left) and Buffalo Bills wide receiver Trumaine Johnson go up for the ball during a game at Rich Stadium in Orchard Park, New York. The Bills won the game, 23-20. (Getty Images)

We’re inching closer and closer to covering all the regions of Texas and listing the best Longhorns from part the Lone Star State.

Now it’s time for North Texas and Fort Worth.

Yes, normally Fort Worth and Dallas are married together, but because of the abundance of talent that comes from the Dallas/Plano/Garland/etc. area, we’re splitting it up. And since there was a debate on whether the Texas panhandle was considered West Texas or North Texas, many players I’d consider “North Texas” got put in West Texas, because the newsroom overruled me. So  Fort Worth, Arlington, Wichita Falls, Mansfield, Flower Mound, Denton, you get your own post, although some of you didn’t get in the post. We’re sorry.

Here are five Longhorns from North Texas and Fort Worth to remember:

A star at Texas in the late 1930s and early 1940s, Crain led the Longhorns in rushing in 1939 and scoring in 1941. He also was the star in the “Renaissance Game” in 1939 when he scored the game-winning touchdown to beat Arkansas 14-13 that’s credited with turning around Texas. Crain scored 41 touchdowns his senior season at Nocona High School. After playing at Texas, Crain would go on to serve three terms in the Texas Legislature.

Harris played at Texas in the late 1940s and was a two-time All-American at center and tackle for the Longhorns. He and Bobby Layne were All-Southwest Conference four-straight seasons, and the Houston Post named Harris the SWC Defensive MVP in 1948. He was a first round pick by Chicago in 1949 but decided to go into the oil and banking industry instead. Before Texas, he was an All-District selection and played in something called the Oil Bowl Game in 1945, which is still a thing in North Texas!

Brockermeyer was a first round pick of the Carolina Panthers and to this day is the only Longhorn to ever be drafted by the Panthers. He was a college All-American in 1994 and was a high school school All-American at Arlington Heights before that. He is a member of the Texas Hall of Honor. He was a two-time All-Southwest Conference selection.

He was put in the Hall of Honor last year and said: ” It’s a huge honor to be in the same breath as guys like Jerry Sisemore, Harley Sewell and Scott Appleton, to name a few. Just growing up in Fort Worth and watching those guys play as kids and to be mentioned in the same paragraph as them is a huge honor.”

He started all 34 games of his career and went 16 games without allowing a sack.

Clayborn was a three-time Pro Bowler for the New England Patriots during the 1980s and was recently named a finalist for the Patriots Hall of Fame. At Texas he was a standout football player from 1973 to 1976 and also ran track and field. He was a four-year letterman, two-time All-American and two-time All-Southwest Conference. He was the Longhorn team MVP in 1976 and helped Texas to SWC crowns in 1976 and 1977. He was the SWC champion in 440-yard relay and mile relay team. He entered the Hall of Honor in 1991.

Sewell is a member of the College Football Hall of Fame and the Texas Hall of Honor. He played at Texas from 1950 to 1952 and played multiple positions. He was the 1952 Cotton Bowl Defensive Most Valuable Player when Texas shutout Tennessee 16-0. Texas won two SWC championships when Sewell was on the roster and he was an All-American and two-time All-SWC player. A standout linebacker at Texas, Sewell played guard in the NFL. He spent 11 seasons in the NFL and made four Pro Bowls and played for the Detroit Lions and Los Angeles Rams. He later worked as a scout for the Rams.