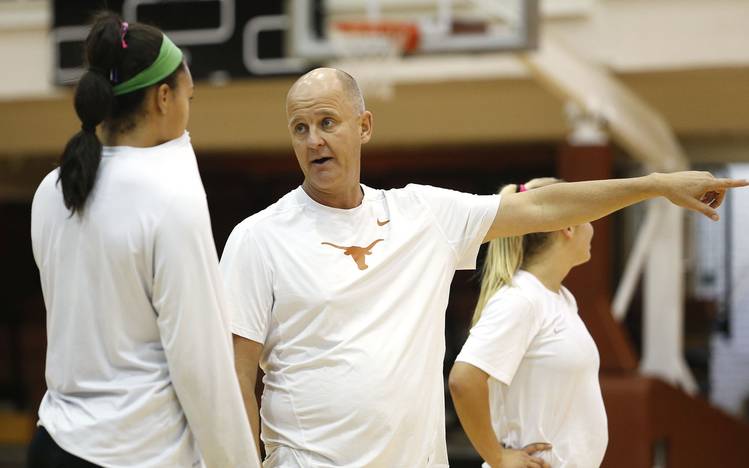 This volleyball season opens the way the last one ended, with Texas and Nebraska battling it out for the nation’s top spot and with questions looming around Longhorns star Chiaka Ogbogu.

Afforded little time to identify whatever shortcomings they may have — which, for Texas, includes figuring out what to do in the wake of Ogbogu’s season-long academic suspension — the teams that appeared in last year’s NCAA title match will square off in the season’s opening weekend. It’ll go down at 5:30 p.m. Saturday at the VERT Challenge in Eugene, Ore., one day after the Longhorns take on unranked Oregon and Nebraska faces No. 10 Florida.

No need to speculate on which team is better. Clarity is coming.

“It’s early in the season, so we’re both not going to be perfect, but it should be really competitive and a fun match,” Texas libero Cat McCoy said.

Nebraska, which bring backs most of its key parts from the team that swept Texas for the national title in Omaha, easily landed the top spot in the preseason coaches poll, garnering 60 of a possible 64 first-place votes. The Longhorns are right behind, again swarming with talent even after the recent bombshell that Ogbogu, a three-time All-American middle blocker, will miss the season due to academics. Her absence compounds the loss of the winningest class in program history, led by Amy Neal, last year’s Big 12 player of the year.

But here’s a sampling of what is back: Front row attackers Paulina Prieto Cerame, who represented Puerto Rico at the Olympics, and Yaasmeen Bedart-Ghani, who came on like gangbusters at the end of last year and made the all-tournament team. Back from injury are former USC transfer Ebony Nwanebu, who, in her lone appearance last year, dominated Nebraska in UT’s early season win in Austin, and Micaya White, last year’s preseason Big 12 freshman of the year who redshirted with a stress fracture on her left leg.

In essence, Nwanebu and White are a recruiting class unto themselves.

You may recall Ogbogu as a non-factor in last year’s title match, taking just 15 swings with a hitting percentage, 0.00, that was by far her lowest of the season. It was an uncharacteristic performance that may have been the lingering result of Ogbogu’s leg cramp that forced her to exit a semifinal win over Minnesota two days earlier. After the title game, Longhorns coach Jerritt Elliott was asked what Nebraska did to neutralize Ogbogu and responded, “Chiaka neutralized Chiaka.”

“I wish we had an opening weekend to get comfortable, but we’re all in the same boat,” Elliott said. “Traditionally, it’s been a bit ugly that first weekend. Some good things, but just not for long periods of time.”

Even without Ogbogu, UT should be sturdy up front. Sophomore Morgan Johnson, who waited her time last year behind Ogbogu and All-American Molly McCage, is primed to take ownership of the position along with help from junior Mirta Baselovic, a defensive wall whose memorable stuffing of Florida’s Rhamat Alhassan last year helped send Texas to its fourth straight Final Four. Trying to catch up is Big 12 preseason freshman of the year Orie Agbaji of Kansas City. And don’t count out freshman Blair Westerlund, of Brentwood Christian, whom Elliott says is progressing in practice.

“We lose some experience in the middle, but it allows some people to step up and fill those roles and I think we have the people to do that,” setter Chloe Collins said.

Breaking down Texas’ 2016 schedule: At Cal