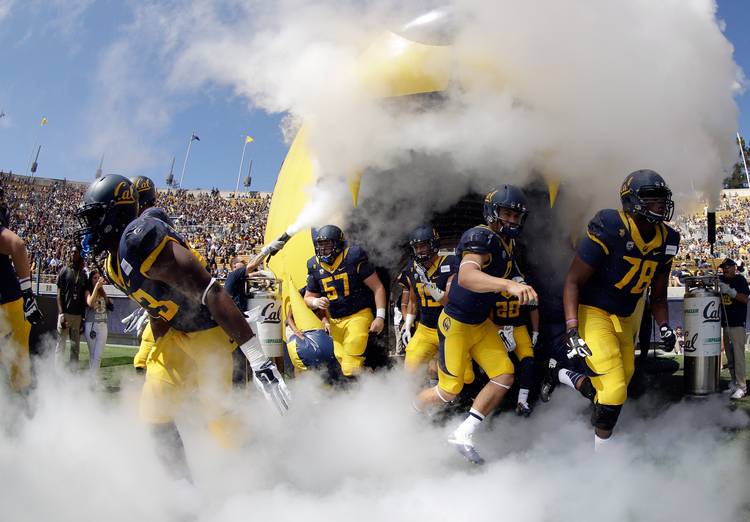 The California Golden Bears run onto the field for their game against the Colorado Buffaloes at California Memorial Stadium on September 27, 2014 in Berkeley, California. (Photo by Ezra Shaw/Getty Images)

Don’t overlook the Week 3 trip to Cal, whose rebuild from the loss of top overall draft pick Jared Goff should expedite with the arrival of Texas Tech transfer Davis Webb. This looks like one of those swing games that could go either way and end up looming large toward the end of the season, perhaps as Texas tries to collect enough wins to save Strong’s job.

The Longhorns have more talent than the Bears, but there’s nothing easy about traveling two time zones away for a night game.

Cal should be well positioned well at quarterback, replacing Goff with Webb, the former Red Raider who’s likely to be taken in the first round of next year’s draft if he can have a productive season.

Of note: Texas is the only Big 12 team that Webb never played against at Tech. And somewhere, Nick Rose will be watching and trying to stop his mind from drifting to last year, when his missed extra point with 71 seconds left cost the Longhorns in a 45-44 loss.

Cal, at a glance

Last year: It’ll be remembered for three things — Jerrod Heard‘s record-breaking night, Rose’s fateful botched extra point, and the fact that Heard’s huge game was wasted in a loss that dropped Texas to 0-2. Heard produced 527 yards of total offense (364 passing, 163 rushing) to bump Vince Young from the school record book. A furious fourth-quarter comeback saw Texas score three touchdowns — a pair of 45- and 13-yard runs by Heard and a 27-yard run by D’Onta Foreman — after trailing 45-24. But the missed PAT was the killer, and it cost the Longhorns a shot in overtime. Goff, who’d go on to be picked No. 1 overall by the Rams, was 27 of 37 for 268 yards and three touchdowns.

Our 2015 coverage: Kirk Bohls’ column (“This was more millstone moment than milestone”); Cedric Golden’s column (“Heard offers hope for the future, but for the present, too”); our game story; five key plays; and a sider on Rose.

Next game on the schedule: At Oklahoma State.