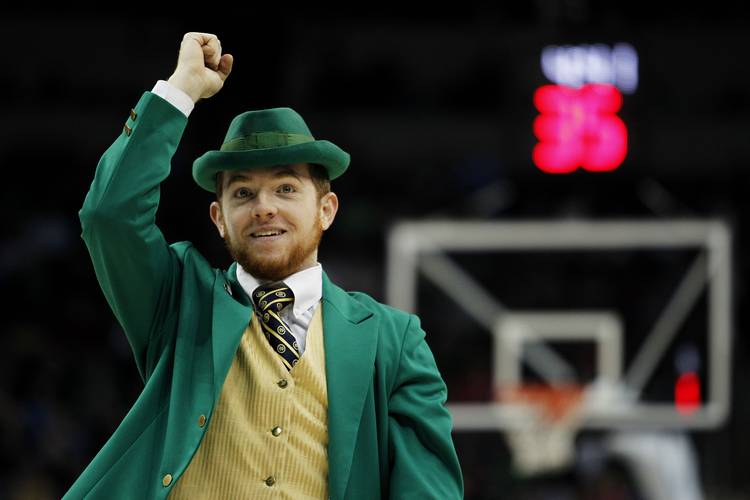 The Notre Dame Fighting Irish mascot, the Notre Dame Leprechaun, performs in the first half against the Northeastern Huskies during the second round of the 2015 NCAA Men's Basketball Tournament at Consol Energy Center on March 19, 2015 in Pittsburgh, Pennsylvania. (Photo by Justin K. Aller/Getty Images)

Rather than go head-to-head with other marquee openers like Clemson-Auburn, USC-Alabama and UCLA-Texas A&M, Texas decided to move this game back a day and grab the Sunday evening national spotlight for itself.

So with the country watching, the Longhorns had better win. Or at least come close.

Anything resembling last year’s 38-3 massacre in South Bend will be, uh, … yeah.

Frankly, this is the biggest game of Charlie Strong’s first three years and could shape what’s perceived to be a make-or-break third season. Perhaps Bevo XV, who will make his UT debut, will counteract the luck of Notre Dame’s Irish.

Though Notre Dame could be rebuilding after the loss of seven draft picks, there’s plenty of optimism at quarterback, be it DeShone Kizer or Malik Zaire, who impressed against Texas last year before going down with an injury the next week.

Notre Dame, at a glance

Our 2015 coverage: Bohls column (“If this thing isn’t fixed, could only the Strong survive?”); our game story (“Horns suffer worst opening loss since 1988”); five key plays; and a Texas sider on Malik Jefferson‘s debut game as a Longhorn.

Next game on the schedule: UTEP

Texas countdown to football: 5 Longhorns not from Texas to remember