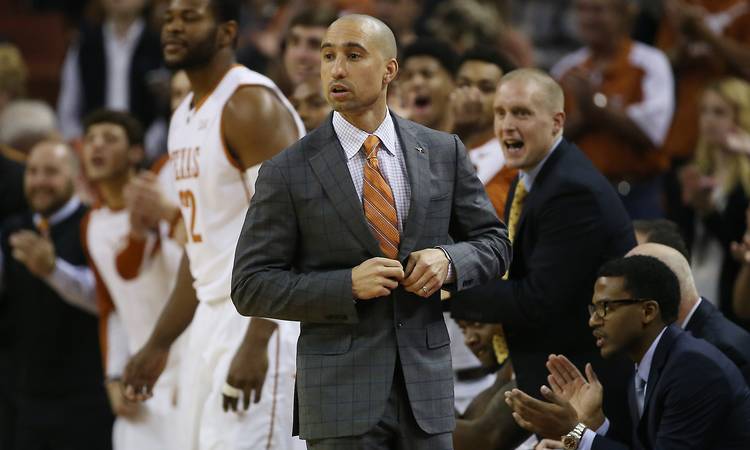 Texas coach Shaka Smart was awarded a sixth year to his guaranteed contract and got a $100,000 raise on Thursday courtesy of the UT System Board of Regents.

UPDATED 7:35 p.m.: The following story has been updated to include comments from Texas men’s coach Shaka Smart and athletic director Mike Perrin.

Texas Chancellor Bill McRaven and President Gregory L. Fenves were both sitting in the front row in Oklahoma City last March. They had an excellent view of Paul Jespersen’s half-court heave that sank the Longhorns in the NCAA Tournament.

“Oh, I was devastated,” Fenves recalled Thursday. “Seeing the shock and disappointment on their faces was heartbreaking.”

While flying back to Austin, school officials believed they had a special men’s basketball coach. That’s why the UT System Board of Regents tacked a seventh year onto Shaka Smart’s guaranteed contract on Thursday and gave him a $100,000 raise.

This move was purely cosmetic, to be sure. Still, Smart will now have a $3 million base salary for the 2016-17 season. His contract already had built-in $100,000 escalator clauses.

“We want to send a message,” Fenves told the American-Statesman. “He is a great coach, an educator, a leader. He’s made such fantastic progress in his first season here. He’s getting national attention. We just want to show him that he’s really important to the University of Texas.”

Consider the message well received over in Cooley Pavilion.

“I’m very appreciative of the support from Chancellor Bill McRaven, President Greg Fenves and Men’s Athletics Director Mike Perrin,” Smart said in a statement. “I’m really happy at Texas and am excited about being here for a long time.”

Smart will also see beefier bonus pay. Last season, Smart got merely $5,000 just for making the NCAA round of 64. That’s a rounding error for this athletic department. Had Jesperson’s shot rimmed out, Smart would have received at least a $10,000 bonus for making the round of 32.

Smart’s first team finished with a 20-13 record and landed fourth in the Big 12 standings. From a conference perspective, Texas had a three-win improvement despite losing center Cam Ridley in January and February to a broken foot.

Smart also was named the Under-18 coach with USA Basketball. He guided the squad to a gold-medal performance in the FIBA U18 Americas championship tournament in Chile this summer.

“Shaka Smart, much like Charlie Strong, is more than just a basketball coach for us,” McRaven said. “He is an educator, a man of incredible integrity. His performance not only on the basketball court but frankly along the student body really does showcase what we expect to be the best in our faculty and our coaches across the UT system.

“It may have appeared to be cosmetic, but we hope what it is doing is showing to coach Smart how much we value the great work he does.”

In a statement, Perrin praised Smart for doing a “terrific job in all facets of building our basketball program.”

“On the court, despite facing a lot of challenges and adversity in his first year, we showed steady progress and produced a lot of exciting moments,” Perrin said. “His outstanding recruiting, talented class of newcomers and overall development of our team in the classroom and the community has been exemplary. I’m excited about what Shaka’s accomplished and look forward to seeing him lead our program in the years to come.”

Breaking down Texas’ 2016 schedule: At Cal