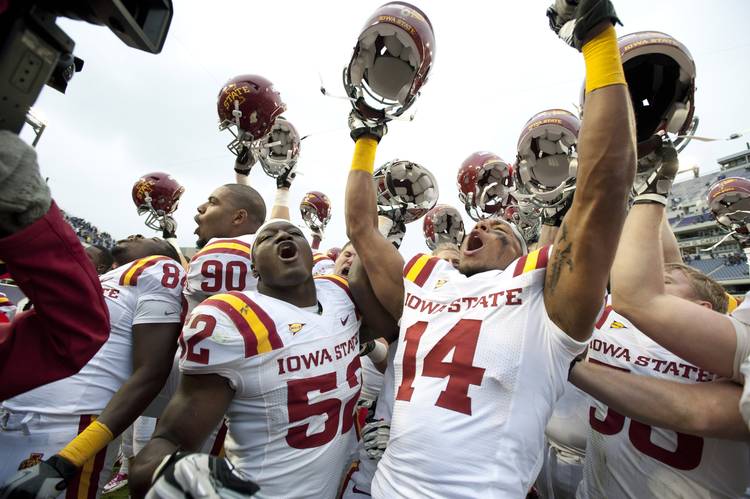 Jared Brackens #14 of the Iowa State Cyclones celebrates with teammates after defeating the TCU Horned Frogs during the Big 12 Conference game on October 6, 2012 at Amon G. Carter Stadium in Fort Worth, Texas. (Photo by Cooper Neill/Getty Images)

This looks like a gimme — until you remember last year’s game in Ames, when Texas managed only 204 total yards and was blanked, 24-0.

It was arguably the most humiliating loss in Strong’s time at Texas, although there are other candidates for that infamous distinction.

After Paul Rhoads failed to make Iowa State a Big 12 contender, the Cyclones turned to Matt Campbell, a consistent winner at Toledo.

Iowa State, at a glance

Last year: The best way to deflate your balloon after winning two straight games, including a nationally televised upset of Oklahoma? For Texas, it was a road trip to Ames. By the end of the night, after the Cyclones’ 24-0 shutout win, Texas and Iowa State were a pair of identical 3-5 teams with identical 2-3 marks in the Big 12. Texas’ best offensive performer, for what it was worth, was Tyrone Swoopes, who threw for 59 yards and rushed for 58 in his 18-Wheeler package coming off the bench; he was 6-of-13 passing on the night. Lanning passed for 188 yards and a touchdown, Warren ripped Texas for 157 yards and a score on 32 carries, and Lazard caught six passes. Looking for bright spots? Peter Jinkens had two sacks, Davante Davis broke up three passes and Michael Dickson averaged 45.8 yards (on nine punts). At least Iowa State’s Homecoming wasn’t ruined.

Our 2015 coverage: (… for those wanting to relive the carnage, that is) Our game story (“Unfocused Horns get hammered by Iowa State”), a Kirk Bohls column (“Strong was quick to the defense of his offense”), five key plays.

Next game on the schedule: At Kansas State