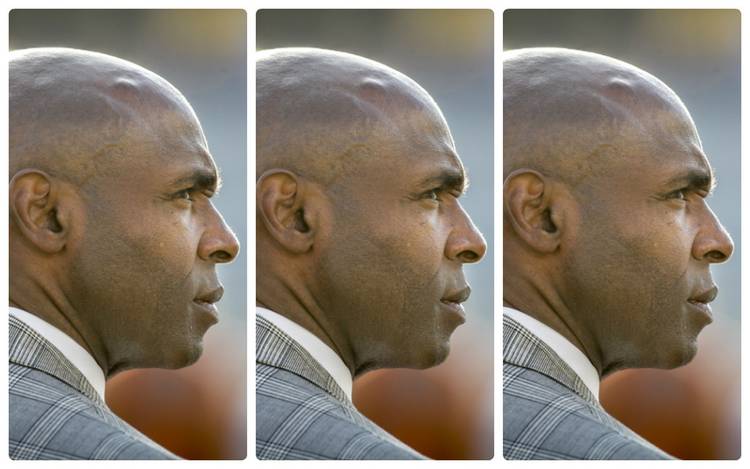 Texas football coach Charlie Strong is entering his third season with the Longhorns. He's 11-14 through his first two years.

The third year, which Charlie Strong is now entering at Texas, can be a charm for a football coach.

Or it can be a curse.

Either way, it can be a clear tell for whether a coach will ever win a national championship at a school where that lofty and demanding expectation comes with the job. The line between coaching legends and coaching disappointments is often drawn just that quickly.

Fighting Irish coach Brian Kelly, who’s in his seventh season in South Bend, might not want to be reminded of this sobering stat, but since the days of Knute Rockne, every coach who has won at least one national championship for the Golden Domers — Ara Parseghian, Lou Holtz, Frank Leahy and Dan Devine — had claimed one by the end of his third season.

Murray Sperber, author of the award-winning history of Notre Dame football, “Shake Down the Thunder,” contends, “The football world has changed so much since Notre Dame coaches won national championships that the old rules don’t apply to Brian Kelly. Rockne et al, even Holtz, didn’t have to play against the incredibly well-financed and almost professional teams that Kelly has to today.”

It’s not just the luck of the leprechaun that’s at work, however. There does seem to be short window before a program’s momentum, recruiting and fan support begin to slip.

“That three- to four-year window is what you’re probably looking at these days,” said Todd Blackledge, a former college and pro quarterback who’ll be calling the Texas-Notre Dame game. “It gives a coach a chance to get his team on campus, on the field and in the locker room … and I just don’t know if fans and alums are going to give you much more of a window than that.”

Consider the histories of other traditional college powers that Texas would consider peers, the ones that round out the baker’s dozen of the top programs of the past 80 years — USC, Alabama, Ohio State, Nebraska, Oklahoma, Miami, Florida, Florida State, Michigan, LSU and Penn State.

In spite of their winning traditions, every one of those schools have had stretches where they’ve struggled and turned to a new face for hope. There, coaches who have responded with a national championship and/or an undefeated and untied season within three years of their arrival include Alabama’s Nick Saban, Wallace Wade and Gene Stallings; Oklahoma’s Bob Stoops, Barry Switzer and Bud Wilkinson; USC’s Pete Carroll, John McKay and John Robinson; Ohio State’s Jim Tressel, Paul Brown and Carroll Widdoes; Michigan’s Lloyd Carr and Bennie Oosterbaan; Miami’s Dennis Erickson and Larry Coker; Penn State’s Joe Paterno; and yes, the Mad Hatter, LSU’s Les Miles.

Urban Meyer has pulled the trick twice, winning a national championship at Florida in his second season, and another in his third year at Ohio State, his current gig.

Coaches who took only a year longer to win a national title and/or have a perfect season include Bear Bryant, Woody Hayes, Jimmy Johnson, Frank Thomas, Jimbo Fisher and the LSU incarnation of Nick Saban. Michigan’s Harry Kipke had an unblemished season in his fourth year, 1932, and picked up a national championship the next year.

Other coaches at power schools came tantalizingly close to hitting that three-year mark, including Kelly at Notre Dame and Fred Akers at Texas. But the company they keep is with others who couldn’t claim a title — John Mackovic and David McWilliams at Texas, Earle Bruce and John Cooper at Ohio State, Ray Perkins and Bill Curry at Alabama, John Blake and Gary Gibbs at Oklahoma. Even Michigan’s Bo Schembechler, who came within 12 seconds of an undefeated season in his third year, couldn’t escape the curse.

Other coaching legends, architects such as Darrell Royal, Bobby Bowden, Steve Spurrier, Bob Devaney, Paul Dietzel, Howard Jones and Howard Schnellenberger, didn’t inherit potential No. 1 programs. They had to build them, no matter how long that took.

Though, in Dietzel’s case, it required only four years for him to field a championship team at LSU and create a legendary defense. Royal won his first title in his seventh season at Texas, in 1963. But by his third season, 1959, Royal had turned the 1-9 team he’d inherited into the fourth-ranked team in the country.

While most turnaround jobs aren’t that extreme, it’s common for a new coach to face a significant rebuilding job and a frustrated fan base. Yet a title shot can come earlier than almost anyone would have predicted.

In 1977, Akers inherited a .500 team from Royal. But the roster included one Earl Campbell, who went on to win the Heisman Trophy in Akers’ first season. Unfortunately, Akers’ No. 1-ranked Longhorns were upset in the Cotton Bowl by Notre Dame — giving Devine a championship in his third year in South Bend. Akers would come close to the brass ring again in his 10-year stint at Texas, but could never quite grab it.

Bruce, in his first season at Ohio State, went undefeated in 1979 and had a national championship within his grasp until a late touchdown allowed USC to eke out a 17-16 win in the Rose Bowl. Over eight more years in Columbus, Bruce would never get that close again, usually logging seasons that would leave him with the nickname “9-3 Earle.”

Gary Moeller went undefeated in his third year at Michigan, but there were three ties to go along with his nine wins in 1992 — not good enough for serious national championship consideration. And after two more years, both 8-4 seasons, he was gone.

Remember Jeff Cravath and Jess Hill? Probably not, unless you’re a USC fan. Cravath was undefeated, but with a brace of ties, in his third season (1944) that was capped by a Rose Bowl win. Jess Hill picked up a Rose Bowl victory in only his second season in a 10-1 campaign (1952).

But it was left to John McKay, who arrived for the 1960 season, to win a national championship for the Trojans in his third year.

At Notre Dame, Kelly played for the national championship with his No.1-ranked and undefeated team in his third season — only to be reminded of how far the gap was between really good teams and Saban’s Alabama machine.

Although three seasons seems to be the magic number at Notre Dame and USC, the demarcation between those coaches who’ll win national championships and those who won’t — whew — it’s not that way at every power program. At LSU, Alabama, Miami and Ohio State, the magic number is higher than that — four.

Now, with the playoffs and the conference championships, it’s harder to win a championship, Blackledge said.

“There’s a lot more scrutiny,” he said. “The pressure to win early and to win often is greater than it has ever been.”

Texas countdown to football: The 10 greatest Friday Night Lights players to play for the Longhorns