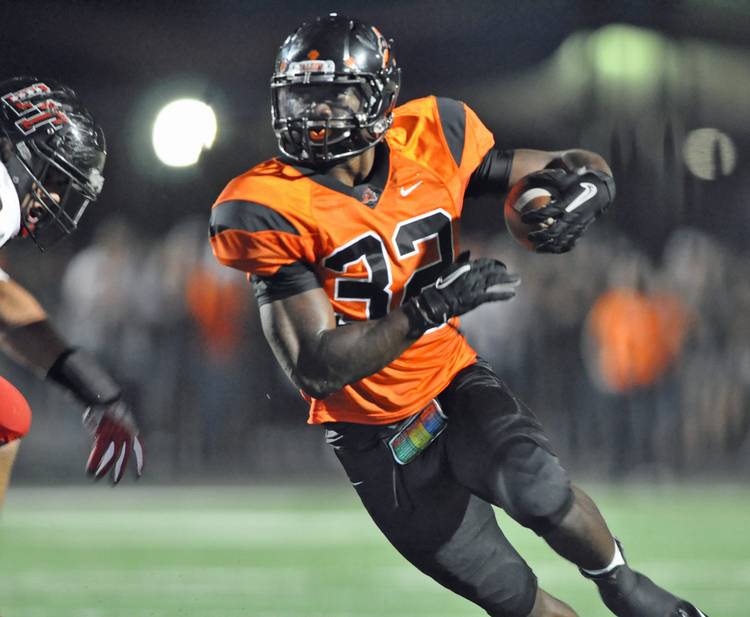 Usually we want to keep to 5. A couple times here or there we’ve gone over five in our countdown.

Today is special though.

Today is the first official Friday Night Lights day of the fall. That’s right, “clear eyes, full hearts, can’t lose!” time for Texas. In honor of that, we’re counting the 10 players who played for Texas who are probably even bigger stars in their hometowns than on campus.

Now, don’t be confused. We’ve listed five Longhorns to remember from different parts of the state, but we were looking at their Texas Longhorn careers and everything else. We’re just looking at the high school football careers of these guys, so don’t write angry emails when you read about Nos. 2, 3 and 4. Don’t do it. Those kids were awesome in high school. We’re also only taking into account those players from Texas, so no Ricky.

Here are the 10 best best “Friday Night Lights” players to ever play at Texas:

He’s a Texas High School Football Hall of Famer and he’s of the greatest Texas produced linebackers ever. Playing for Waco from 1998-2000, Johnson was twice All-State and led the Lions fro the Class 5A quarterfinals as a junior and senior. In his final two seasons he had 327 tackles, 34 tackles for a loss, 11 sacks, 10 forced fumbles and four interceptions. He was a two-time Parade All-American and a top recruit. We’ve written about him a lot. Here’s the Waco High highlights:

Shipley graduated from Burnet as the state’s all-time leading receiver, He had 264 receptions from 2000-2003, 5,424 yards and 73 touchdowns. In 2002 and 2003 he led Burnet, coached by his dad Bob, to a 28-2 record and back-to-back state championship games. He was an All-American in high school and was the Class 3A Offensive Player of the Year and was All-State on both sides of the ball his junior and senior season.

We wrote about him, and Johnson, here.

His record at Spring branch was 31-2-4 from 1962-1964. He led his team to the playoffs three times and rushed for 3,303 yards in his career. He scored 272 points in his career. As a senior he rushed for 1,311 yards and was All-District, All-State, Parade All-American and Scholastic magazine All-American. He is a member or the Texas High School Football Hall of Fame, like Johnson and Shipley.

Sadly, the internet has no YouTube clip of those 1960s Spring Branch teams.

He was named the Lineman of the Decade by Dave Campbell’s Texas Football in 1970 for his work at Jefferson from 1959-1961. He was also named to the All-Time Texas High School Football team the same magazine did in the late 1990s. He averaged 15 tackles a game and was All-District, All-City and All-State at Jefferson.

The Tyler Rose rushed for 2,036 yards his senior year and led his team to a 15-0 record and the Class 4A State Championship in 1973. He was named named High School Player of the Decade by a panel of sports writers. Barry Switzer once wrote that Campbell could have gone straight to the NFL and been a star if he wanted to. He didn’t and won a Heisman, sorry Barry.

He was the top high school football player in the nation his senior year.

In 2001 Vince Young passed for 3,819 yards and 59 touchdowns. Yeah. Read that one again. He was the Class 5A Player of the Year and a Parade All-American. He’s the best Texas player to ever come from Houston. He accounted for 12,987 yards at Madison and was the top high school football prospect in the nation according to the Sporting News in 2001.

He’s the best high school running back this writer has covered so far. Brown and Johnny Manziel put on one of the best high school football shows I’ve ever seen in 2010 (I went back watched the preview video I did on this game). Brown rushed for 353 yards and four touchdowns on the road against Kerrville Tivy. His team lost because Johnny Manziel threw for 428 yards, six touchdowns and rushed for 130 yards with two more touchdowns. In that game, Brown had scores for 35, 11 and 63 yards. It was stupid and I’ll never forget Tivy coach Mark Smith’s amazement after that game. “Shame someone has to lose that game,” he said.

OK, enough about memory lane. Malcolm Brown was great at Steele and led the Knights in 2010 to a Class 5A, Division II state championship. He was All-State twice, first team All-District three years and was the second-best rated running back and seventh best recruit in the nation. He rushed for 6,663 yards and 86 touchdowns for Steele. He had a career yards-per-carry average of 9.8. Basically, he’s picking up a first down on every run. In three years as a starter, Steele was 44-9. He was the Class 5A Offensive Player of the Year in 2010, the same year he had 2,637 yards rushing and scored 33 touchdowns.

Gilbert was the Gatorade and Parade National Player of the Year his senior season. He was EA Sports Mr. Football USA. He was USA Today’s Offensive Player of the Year. He was the first Texan to win Gatorade National Player of the Year. He is the state’s all-time leading passer and one of its winningest quarterbacks. He threw for 12,540 yard and 138 touchdowns. His touchdown mark, completions (895) and attempts (1,368) are second in the state’s history. More Texans start in the NFL at quarterback than any other state, and he out threw them all. His 55 touchdown passes in a season are third all-time. He completed more passes in a single season than any other Texas quarterback (360) and his 4,851 yards passing in a single season is tops as well. He was 39-4 as a starter and finished his career on a 30-game winning streak and never lost a district game, despite playing in one of Central Texas’ best districts. He also rushed for 1,424 yards and scored 32 touchdowns in his career.

A three-time All-State player  and an All-American, Gray is one of the state’s best all-time running backs. He was a Parade All-American, Sports Illustrated and USA Today All-American and played in the Under Armor All-American Game in 2012. He was the top running back and second best recruit overall by ESPN his senior year and was on the cover of Dave Campbell Texas Football. He was the 2011-12 Gatoraide National Player of the Year.

At Aledo he was 56-4 as a four-year starter and won three state titles. His career numbers are: 10,889 rushing yards, 189 rushing touchdowns and 1,244 yards recieicing on 73 receptions and 16 touchdowns. He even scored 15 touchdowns as a freshman.

Of course his highlight tape is epic.

History 101: Year Three will be critical for Charlie Strong and his Texas program