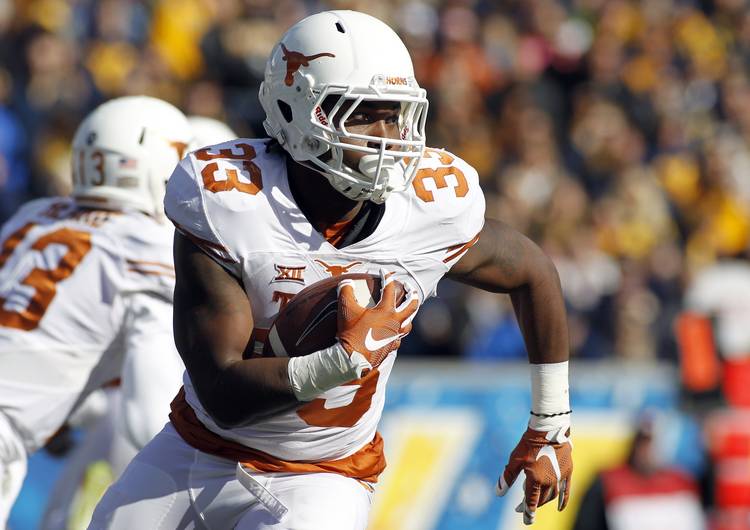 D'Onta Foreman #33 of the Texas Longhorns rushes in the first half against the West Virginia Mountaineers during the game on November 14, 2015 at Mountaineer Field in Morgantown, West Virginia. (Photo by Justin K. Aller/Getty Images)

D’Onta Foreman won’t surprise anybody this season. The Texas running back can’t sneak through scouting reports. He can’t camouflage himself on game tape. Defensive coordinators will build schemes to bottle up this hard-charging, 240-pounder with explosive game-breaking speed.

Good luck with all that.

“I feel like people still don’t really know who I am,” Foreman said Friday, in aw-shucks fashion. “I feel like, I don’t like taking that much credit for myself. Oh, people are going to be game-planning for me? I still feel like I’m still somewhat under the radar in a way.”

Uh, no. There is no more hiding anywhere after leading the Longhorns in rushing last season. Not when you show tremendous body lean on an 81-yard run against Oklahoma.

Or how you got wide, bolted up the western sideline and dashed for a 93-yard score against Kansas.

Or how you blew past two never-had-a-chance tacklers en route to a 65-yard touchdown at West Virginia.

And there’s no escaping the spotlight when you could be Texas’ first 1,000-yard rusher in almost a decade. Foreman averaged 7.2 yards per carry in 10 games last season. At the risk of sounding hyperbolic, that’s better than any season averages Ricky Williams, Cedric Benson or even Earl Campbell put up.

“D’Onta is actually really explosive,” teammate Chris Warren III said. “He goes from zero to top speed really fast. It doesn’t take him much time at all. He finds holes that I would never, ever find. I don’t know how he does it. He’s a crazy athlete.”

And perhaps the best news is the game is slowing down mentally, a sure sign of an athlete’s maturity and growth. That’s probably why Foreman wants to become a coach someday himself.

“Just the awareness of everything,” Foreman said. “Now when I’m out there, I feel more comfortable with the blitz pickups and just seeing where everything is coming from and reading the safeties. That’ll tell you a lot, just watching the safeties. Just the mental aspect and me growing up, I see the game a lot differently now.”

Yes, D’Onta Foreman has freed himself of the title of being “Armanti’s brother.” Not that there’s anything wrong with that moniker. Armanti Foreman, projected to be one of UT’s top receivers, has always been his brother’s biggest fan, and vice versa.

Those two were the biggest stars on Friday nights in Texas City. If you went to see the Stingarees, you saw the Foreman twins.

Now, D’Onta is the one who hulked up this summer, getting up to 249 pounds, according to the early training camp roster.

Texas coach Charlie Strong is banking on Foreman and Warren’s bulk to be a terrific 1-2 punch in Sterlin Gilbert’s spread offense. Gilbert has professed to wanting a balanced attack, so that means Foreman, Warren, Kirk Johnson and Kyle Porter all will get plenty of chances.

Asked how he’s expecting them to dole out the carries, Foreman said, “Whatever we can do to win. I just want to win, really.”

Foreman will play a key role in determining the Longhorns’ fate this season. Expect him to do it as fast as possible.

“You know at any point, he can take it,” Warren said. “You never know with him. It’s just so fun to watch.”

With talent galore, Chris Warren III hopes for deep rotation at running back