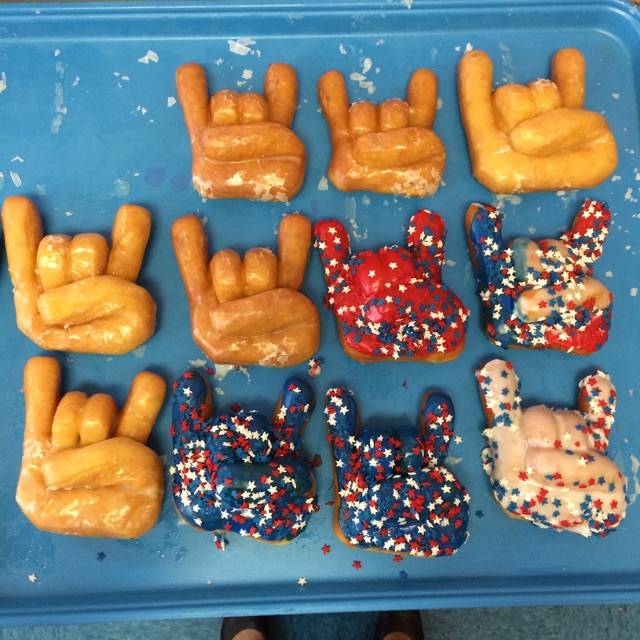 One look at the yeast-and-glaze concoction that resembles the Hook ‘Em Horns hand gesture and you can understand why fans gobble it up.

But if you were thinking of celebrating the start of football season with a dozen, think again. The University of Texas has found some holes in Seng’s design.

Last month, Seng received a letter sent on behalf of the university citing a violation of trademark rights in relation to the Longhorn Donut and requesting that, when it comes to selling them, Seng yeast and desist.

“It’s not fair. It’s not right,” Seng said. “This I created by myself, I’m not copying from them. I’m supporting them.”

The letter, dated July 19 and sent from law firm Pirkey Barber, which represents the University of Texas in trademark and unfair competition matters, included a photo of Seng’s Longhorn Donut and an explanation that it violates UT’s trademarked “LONGHORN Marks,” which include the words “longhorn” and “longhorns” and the Hook ‘Em hand symbol.

“While the University appreciates Donut Taco Palace’s enthusiasm, UT is understandably concerned about your use of the LONGHORN Marks in this manner,” the letter said. “We suspect that you were not aware of the University’s trademark rights when you started selling ‘Longhorn Donuts.’ We trust that, now that these rights have been brought to your attention, you will take the appropriate steps to discontinue sales of the ‘Longhorn Donuts’ and refrain from any other uses of the University’s marks.”

Craig Westemeier, senior associate athletics director for trademark licensing at the University of Texas, said in an email that the university receives tips on trademark violations from a variety of sources including alums, fans, staff, faculty, students and anonymous emails. He said the UT brand must be monitored and protected in order to maintain its integrity and value.

“It is an integral part of the trademark law that we protect to regulate the use of and educate the public regarding our rights in these marks. That is our responsibility as a trademark owner,” he said. “We cannot permit the use of our trademarks without providing approval, review and quality control of the item being produced. An inferior product or one that is not properly vetted could hurt the University’s reputation.”

Austin trademark and copyright attorney JT Morris, who has no affiliation with the university or this situation, said the circumstances raise some interesting questions.

“I think UT has recently been pretty aggressive in enforcing their trademarks, so it’s not surprising from that perspective,” Morris said. “The test when we’re talking about whether a trademark infringes or not is likelihood of confusion. Would a consumer see the doughnut with the Hook ‘Em sign and confuse it with the Texas Hook ‘Em sign to the point the consumer would think those doughnuts were affiliated with the university or that the university is endorsing those Hook ‘Em-shaped doughnuts? We’re not talking about athletic apparel or other things a consumer would affiliate with university symbols. We’re talking about a doughnut.”

Seng first attempted a hand-gesture doughnut years ago by customer request. She spent two years perfecting the technique and now sells a variety of hand-gesture doughnuts, including a peace sign, an “I love you” sign and a thumbs up (so far she’s received no complaints from the Aggies). She sells a limited number of various hand-gesture doughnuts in the shop Fridays, Saturdays and Sundays. She also offers a doughnut that highlights the middle finger, but you’ll have to special order that one.

“I think a couple people ordered that for their boss,” she said, laughing.

Seng, 36, was born in Cambodia and moved to the United States in 1997. She was running a salon in Boston in 2006 when a family member told her that doughnuts do well in Texas, so she hopped a flight to Austin and called every doughnut shop in town, hoping to strike a sweet deal. On her final call, to the former Donut Palace at 5446 W. Highway 290, she learned the owner was ready to sell. She purchased the shop, stuck the word “taco” into the name and the rest was history.

“I moved here for doughnuts,” she said. “Nobody wanted me to buy a doughnut shop at all in my family. They know I’m a good cook, but they never expected I would be a baker. But I wanted a doughnut shop.”

These days, she puts her brother and her dad to work behind the counter and oversees a tight, small staff, some of whom arrive at 1:30 a.m. so that everything is ready when the first customers arrive at 5 a.m. There are two other Donut Taco Palace locations in the Austin area, but they are no longer affiliated.

On an average morning at Donut Taco Palace, you’ll find a mix of kids in jammies clutching chocolate milks, suit-clad professionals grabbing a dozen on their way to work and retirees lingering over cups of coffee. The atmosphere was even immortalized in a song by musician Shinyribs, “Donut Taco Palace,” that references everything from the shop’s rainbow sprinkles to its carnitas.

“She sells tacos and doughnuts, but she gives away love,” said customer Sally Harris, adding with a wink that Seng also gives free doughnuts to seniors.

David Allen has been a customer at Donut Taco Palace for 10 years. He comes in once a week for the picadillo tacos and sometimes orders kolaches for meetings. Even though he’s an Aggie, he called the letter “silly.”

“Any publicity is good publicity,” Allen said. “You’d think the university would let it go.”

This is not the first time UT has been criticized for its enforcement of trademark violations. Earlier this month, Mississippi’s Kossuth High School announced it would drop its current longhorn logo — which it sported along with its double-take-inducing maroon-and-white school colors — at the request of the university. On the food front, in 2003, UT sued the owners of a burger joint called Bevo’s Grill for trademark infringement. The owners quickly changed the name.

Inside Donut Taco Palace, where pale pink walls are covered with photos of menu items that include a doughnut sandwich (a cinnamon roll, cut in half, toasted and stacked with cheese, egg and sausage) and yes, a doughnut taco, there’s a blank space where the Longhorn Donut used to be. Seng said fighting the university would probably become a doughnut vs. Goliath proposition that she can’t afford, so for now she’s re-naming it and purposely selling fewer.

“We’ll change the name and let it go,” she said. “It wastes time to fight back. It’s not worth it.”

As for the new doughnut name? They’ve tossed around the name Lavaca, but haven’t officially settled on anything.

“Whatever we can call it,” she said, “without getting sued.”

With talent galore, Chris Warren III hopes for deep rotation at running back