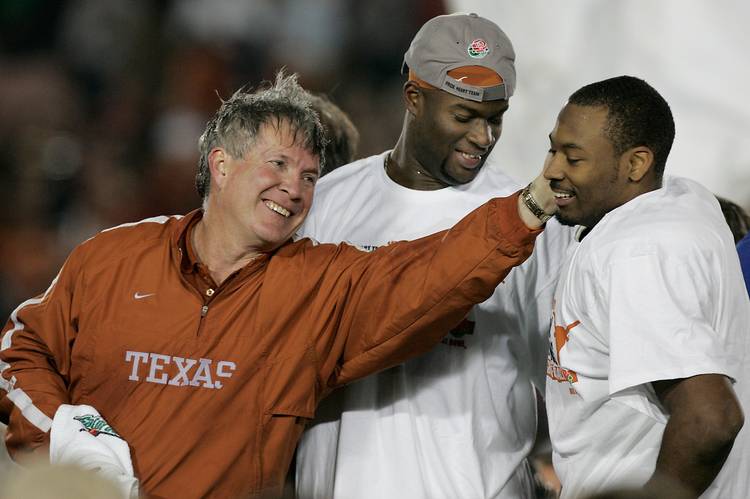 Texas' Mack Brown congratulates Michael Huff and Vince Young after being named the Defensive and Offensive Players of the game following their victory over USC 41-38 for the National Championship in the Rose Bowl.

We’ve been all over the state with just two stops to go: Dallas and the trees of East Texas. Today, we’re heading to, play the theme song J.R., Dallas.

Lots of players have come from the Dallas part of the Metroplex. We split Dallas and Fort Worth up so we could drop more names on a list. Dallas’ top five has three College Football Hall of Famers, a bunch of All-Americans and a Thorpe winner.

Here are five Longhorns from the Dallas area to remember:

Blalock was an All-American in 2005 and 2006 and was the Big 12’s top offensive lineman in 2006. He was a four-time All-Big 12 selection and before Texas was a USA Today High School All-American in 2001. Blalock opened holes for Cedric Benson, Vince Young, Colt McCoy and Jamaal Charles. The right tackle was on the national championship team, was a team captain his senior season and was a second round pick of the Atlanta Falcons in 2007.

Huff won the Jim Thorpe Award in 2005, the same year he was a unanimous All-American. He was first team All-Big 12 in 2004 and 2005. He used his career at Texas to leverage the No. 7 pick in 2006 (going to Oakland), a few months after helping Texas to the national title. Huff, who was a second-team All-Pro with the Raiders in 2010, is also famous for stuffing Lendale White in the 2005 Rose Bowl that helped set up the game-winning touchdown. He entered the Texas Hall of Honor last fall.

Huff now does this for the Longhorn network:

All-American, All-Southwest Conference and a World War II veteran, Mal Kutner is in the College Football Hall of Fame after playing at Texas from 1939-1941. Kutner was inducted into the hall in 1974 and helped Texas to an 8-2 record in 1940. In 1941, with Kutner playing end, tackle and halfback, Texas went 8-1-1. He entered the NFL following his service and was the 1946 NFL Rookie of the Year and the 1948 NFL MVP.

All we can say about Bobby Layne is that he’s the No. 1 player on this list: Six Longhorns in a hall of fame. NFL, College Football and Texas High School Football hall of famer.

How will Texas’ season play out? Questions, answers from our crystal ball