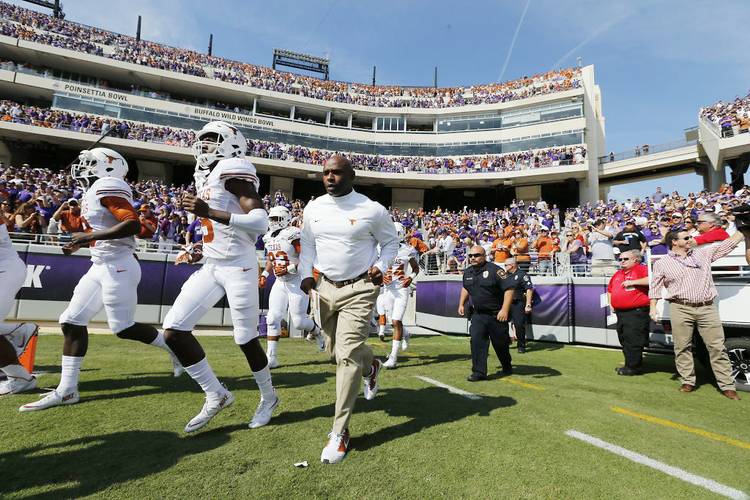 OCTOBER 3, 2015 - Texas coach Charlie Strong and team run out on the field before their game against TCU at Amon G Carter Stadium in Fort Worth, Tx., on Saturday, October 3, 2015. (RODOLFO GONZALEZ / AMERICAN-STATESMAN)

“I can’t promise anybody anything,” the Texas linebacker said when asked about the upcoming season. “You don’t give people promises because you don’t know the outcome. So, our thing is to just go out and play as hard as we can.”

Jefferson and his teammates played it close to the vest about what Longhorns fans should expect this season.

Sure, new offensive coordinator Sterlin Gilbert will unleash a new up-tempo spread offense. And everybody knows the Texas defense must improve.

Will Texas coach Charlie Strong’s team make considerable strides this season? Well, the answer will reveal itself over the next three months.

With uncertainty lingering and anticipation building, we’ve taken a stab at answering 15 questions about the season:

1. How many games will Tyrone Swoopes start?

Davis: He’ll probably start against Notre Dame, although I’m not sure why. If Shane Buechele can’t assert himself, it’ll be a long season.

Autullo: Three. Some fans wish the number was zero, but Swoopes will get the nod a few times amid injuries or struggles by Buechele.

Autullo: 890 — he has the talent to be UT’s first 1,000-yard rusher since Jamaal Charles, but will he stay healthy long enough to do it? Call me skeptical.

Davis: Keeping this number realistic, let’s say 8.5. It’s surprising to me Jefferson isn’t being used off the edge a little. Or, so he says.

Davis: Naashon Hughes will once again lead the way, getting seven sacks. But Charles Omenihu will turn heads, too.

Autullo: Hughes. He should be good for last year’s total (5.5), if not more. Frankly, Texas lacks premier talents who can hunt the quarterback.

5. What will Shane Buechele’s TD/INT ratio be?

Davis: Assuming he starts the final 12 games (11 regular season and bowl), Buechele finishes with 22 touchdowns and 15 interceptions. Fans will give the freshman a lot of leeway.

6. How many true freshman will start a game?

7. Besides Buechele, who’s the one freshman Texas cannot live without?

Davis: That’s easy. Devin Duvernay should be lined up in the slot, returning punts and kickoffs, running up and down the stands passing out popcorn if needed, too.

Autullo: Zach Shackelford. With no other options at center, the lightly-recruited freshman was earmarked to start the day he walked onto campus. And he’s already hurt.

8. Who’s this team’s most underrated player?

Autullo: Haines. More athletic than his critics give him credit for, Haines is one of the top five players on this team. A better term might be “under-appreciated.”

9. What player really needs to break through this year?

Davis: Defensive tackle Paul Boyette has the experience. But if he wants to be treated like future NFL draft picks Malcom Brown or Hassan Ridgeway, he needs to earn it.

Autullo: Bryce Cottrell. If he’s going to start, the career backup had better break through and start harassing quarterbacks.

Davis: Prediction — the saucy Aussie will be a legit Ray Guy Award candidate before his career is over. Put me down for 43 yards per punt this season.

Davis: OK, so you have to wonder if Haines’ mojo runs out this season, especially with DeShon Elliott and Brandon Jones waiting in the wings. I’ll stick with three.

Autullo: Three. Haines tends to be in the right place at the right time, but he deserves some credit for that as well.

Davis: At this moment, all I’m willing to commit to is one — offensive lineman Kent Perkins. The 2018 and 2019 drafts should have several Longhorns, though.

Autullo: Two. Haines and Perkins. I’m going out on a limb with Haines, but Perkins should be a sure thing.

Davis: Well, considering I have the Longhorns going 8-4 this season, of course. Doesn’t that put them into the Russell Athletic Bowl in Orlando?

Autullo: Yes — the Texas Bowl. For the second time in three years.

Davis: Offensive stats have spiked every time this spread offense is implemented, regardless of school. Texas could average 35 points per game. If you can’t put up 30 week in and week out in today’s college football environment, you’re not very good.

Autullo: 30.0 — and more importantly, the offense should be more consistent. Long gone are the days of 7- and 10-point efforts.

Davis: People forget that Texas’ defense actually held its own in 2014 until the unit simply ran out of gas down the stretch. This unit must be better this season, and that starts with stopping the run. Put me down for 28 points per game.

Autullo: 27.0 — the Longhorns will improve slightly, but at this moment I have little faith in them stopping the run.

Texas countdown to football: 5 Longhorns from Dallas to remember