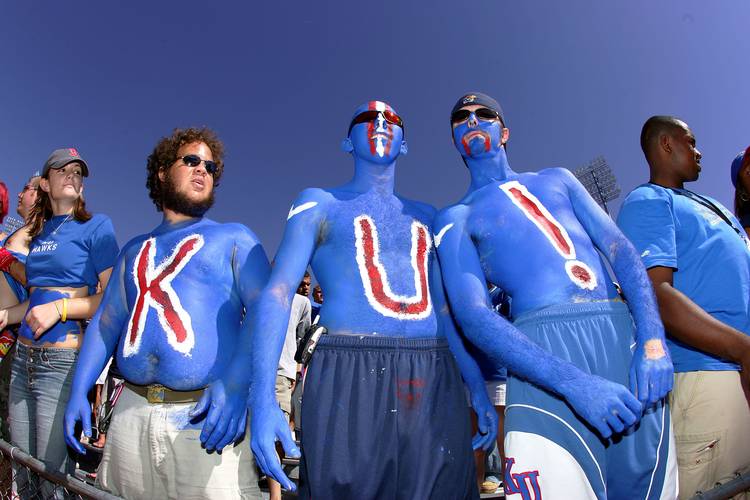 Painted fans of the University of Kansas watch the game against Texas Tech in the first half at Memorial Stadium on September 25, 2004 in Kansas City, Missouri. (Donald Miralle/Getty Images)

With the possible exception of UTEP in Week 2, this is the most winnable game on Texas’ schedule. Kansas, as you may recall, went winless in David Beaty‘s first season and was flattened in Austin, 59-20.

That 0-12 campaign was the coronation of several years of poor recruiting and retention by former coaches Charlie Weis and Turner Gill. Amazingly, the Jayhawks over the past seven seasons are 4-57 in the Big 12.

If the Longhorns come into this game with five wins, they’ll be in great position to get a sixth and become bowl-eligible.

Kansas, at a glance

Triplets: QB Ryan Willis (164-315-1,719 yards, 9 TDs/10 INTs in 2015). Or Montell Cozart (66-105-752, 2/1). Beaty, who will call plays, can use either — Willis started eight games last year, but Cozart missed most of the season with an injury; RB Ke’aun Kinner (xx), the former JUCO transfer who led the Jayhawks in rushing last season; and WR LaQuvionte Gonzalez, the former Aggie who’s been reunited with Beaty — his old position coach at Texas A&M.

Last year: The 59-20 win at home may have helped calm the fan base that saw Texas self-destruct in a 24-0 Halloween night loss in Ames; after this win, the Longhorns were looking at wins in three of their last four games and needing two wins out of the final three (at West Virginia, at home vs. Texas Tech, and at Baylor) to become bowl-eligible. Yes, Texas’ big offensive night came at the expense of KU’s defense. The Longhorns had eight plays of 20 or more yards and scored on an 84-yard touchdown pass (Jerrod Heard to John Burt, in the first quarter) and a 93-yard touchdown run (D’Onta Foreman, in the third). Heard passed for 201 yards, Tyrone Swoopes added 98 and also four rushing touchowns out of his 18-Wheeler package. Kansas moved the ball (426 total yards), but was only 9 of 20 on third-down conversions.

Our 2015 coverage: Our game story (“Longhorns do what they should, bury winless Jayhawks”); Kirk Bohls’ column (“Just Texas beats just Kansas, but a win is a win“); a sider on Texas’ big-play night and a sider on Foreman; and an expanded boxscore.

Next game on the schedule: TCU