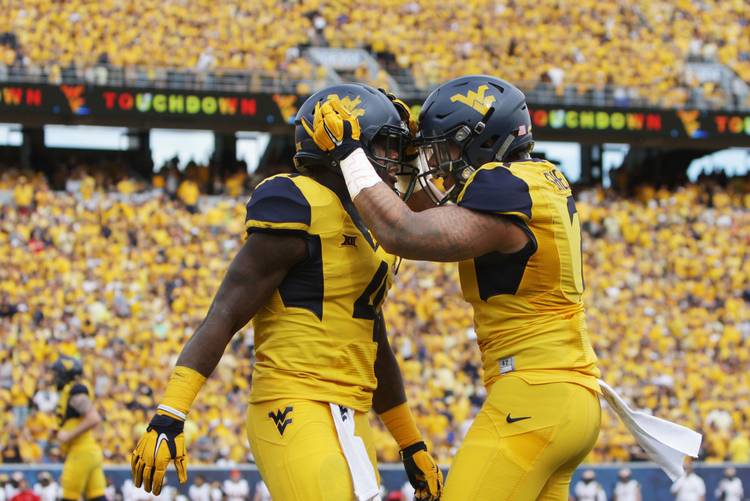 In this Sept. 26, 2015 file photo, after scoring a touchdown, West Virginia running back Wendell Smallwood (4) celebrates with his teammate West Virginia running back Rushel Shell (7) during the first half of an NCAA college football game against Maryland, in Morgantown, W.Va. The Mountaineers (3-0) will play three of its first four conference games on the road, all are against ranked opponents, starting Saturday, Oct. 3 at No. 15 Oklahoma (3-0).(AP Photo/Raymond Thompson)

If there’s a coach on Texas’ schedule with a seat hotter than Strong’s, it’s West Virginia’s Dana Holgorsen, who failed in the offseason to strike a deal with administrators on a contract extension. In February, negotiations ended and both parties tabled the conversation.

So there’s a chance that a job or two may be on the line here.

WVU ditched the pass in last year’s meeting, running the ball on 51 of 63 plays and exposing a soft interior of UT’s defense. Wendell Smallwood (165 yards) is gone, but the Mountaineers still have Rushel Shell (54 yards) to go with underrated quarterback Skyler Howard.

West Virginia, at a glance

Last year: It was a sloppy loss in Morgantown — five turnovers, by way of three fumbles and two interceptions, led to 24 West Virginia points in a 38-20 loss to the Mountaineers. D’Onta Foreman rushed for 147 yards, his fourth 100-yard game of the season. Jerrod Heard, who was 11 of 18 for 162 yards and a touchdown, threw both of the picks. Texas outgained West Virginia, 439 yards to 379. Johnathan Gray injured his foot, an injury which would lead to Chris Warren III‘s ascension to starter. Of note: Just a few hours after the game, Lewisville guard Denzel Okafor tweeted that he had committed to the Longhorns.

Next game on the schedule: At Kansas