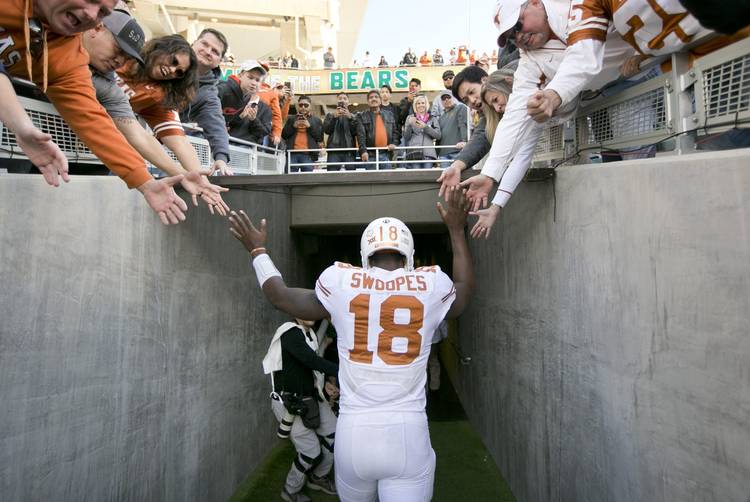 Few decisions create as much hullaballoo as who should be the starting quarterback.

This much we know: senior Tyrone Swoopes and freshman Shane Buechele will both play Sunday against 10th-ranked Notre Dame. Looking at it through that lens, does it really matter who runs onto the field first?

To some, maybe not. For others, absolutely.

“I love Tyrone. I always tell people I don’t really see what Tyrone was so bad at,” running back D’Onta Foreman said. “I feel like he’s grown a lot, and he knows that this is his last chance, really. This is his senior year. I have a lot of confidence in Tyrone. I feel like he can go out there and play well for us.”

And yet in practically the next breath, Foreman praises Buechele. “He can do everything. I tell him all the time, ‘Man, what can’t you do.’”

Swoopes’ story is well documented. He’s 6-8 as a starter at Texas but hasn’t led a winning team since his junior year in high school. A notoriously good practice player, Swoopes has dynamite arm strength but his accuracy becomes a problem in games.

Buechele has all the tools any coach craves. The Arlington Lamar product looked good in the spring game, but Strong must wonder how Buechele will react in front of 100,000 screaming fans. At least Swoopes has some skins on the wall going into the biggest game of the Strong era.

Whatever Strong decides, the third-year coach will have confidence knowing the rest of the offense is better than what fans saw in 2015.

Here’s a look at the projected starters and some key depth on offense:

Quarterback: Tyrone Swoopes, Shane Buechele, Matthew Merrick. Strong will likely give Swoopes the first crack at the Irish given the pressure-packed stakes of the season opener.

Left guard: Patrick Vahe. Like Williams, Vahe was a freshman All-American last season, too. Off the field, go spend 5 minutes with Vahe and try not to smile. You will fail.

Center: Jake McMillion. Freshman Zach Shackelford was pegged for the job, but an ankle injury has left his status up in the air.

Right guard: Kent Perkins. Williams and Perkins are the only two offensive linemen with no known bumps or bruises.

Right tackle: Tristan Nickelson. The 6-foot-9 junior’s status against Notre Dame will depend on his ankle injury. If he can’t go, it’s likely to be Brandon Hodges.

Breaking down Texas’ 2016 schedule: At Kansas