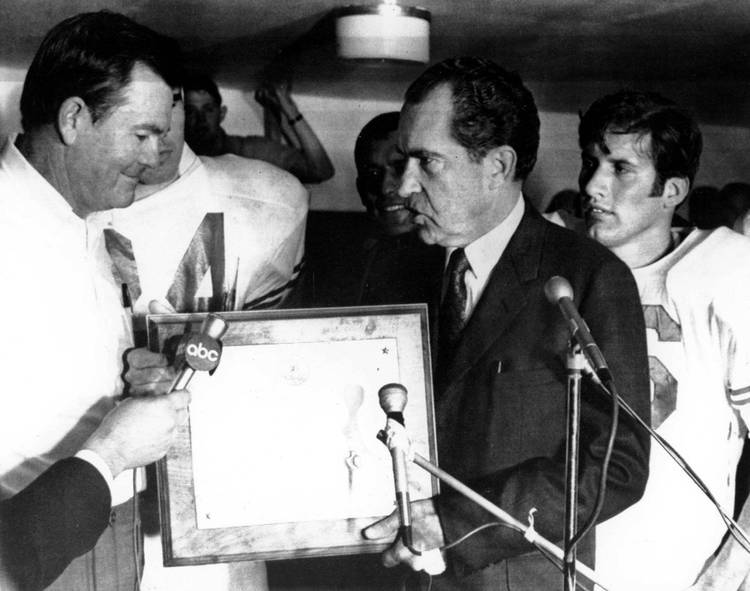 Texas and Notre Dame will be aired on the former home of Wide World of Sports, the Drew Carey Show and the current home of Modern Family. Yes, ABC will get the Sunday broadcast. Now, we’re sure it’ll be “ESPN on ABC” and the ESPN branding will be all over this one, but the game will be on your ABC station. A few years ago ABC Sports, which gave us some of the best sports television ever and arguably covered a single event (the 1972 Munich Games) better than anyone ever has given the technology, closed shop and let ESPN do their work.

No more ABC Sports, now just “ESPN on ABC.” And now Texas is playing Notre Dame on “ESPN on ABC”  at 6:30 p.m. and presented by Southwest Airlines.

We’re guessing Kirk Herbstriet and Chris Fowler will be involved (I mean, I love Chris Spielman and Sean McDonough, but this game is little above them, right?), and Herbstreit is already starting to build up Texas as they prepare for the No. 10 team in the country.

How has Texas fared on ABC?

Earl Campbell’s Heisman winning season had back-to-back close games with Oklahoma and Arkansas. The Oklahoma game, a 13-6 win, was on regional television that fall. The next week, Texas traveled to Arkansas for a national game at noon. Arkansas led Texas in the third quarter 9-6, but Ham Jones scored the only touchdown of the game with 4:31 remaining to give Texas the lead for good. The star or the game was Texas’ three-time All-American kicker Russell Erxleben who connected on field goals of 58 and 52 yards.

Side note: Erxleben also is tied for the record for longest field goal in NCAA history when he hit a 67-yard field goal against Rice. Erxleben, of Seguin, Texas, was a first round pick in the NFL Draft (11th overall!) by the New Orleans Saints. We’ll gloss over his two fraud convictions he has and just say that this guy is best kicker in Texas history.

This ABC game is also a classic Campbell game. Yeah, he didn’t score any touchdowns, but he rushed for 188 yards on 34 carries. Texas went 11-1 in 1977, the only loss coming to the Irish in the Cotton Bowl on CBS, who owned the rights to the bowl game.

The last of Colt McCoy’s 43 wins was a classic with super-late drama that involved officials looking at when balls were thrown out of bounds, and how many seconds were left and Ndamukong Suh doing Ndamukong Suh things. Oh, and if Texas won the game, the Longhorns would be headed to the BCS National Championship Game, so this game had everything. Let’s break it down like this:

That 46-yard field goal by Hunter Lawrence sent Texas to the Rose Bowl.

Suh had 4.5 sacks, and is one reason why Suh became a national star.  And then McCoy said

this cliche line after the game: “We had so many things not go our way tonight but we found a way.”

Question, though, if McCoy had played better, would he have won the Heisman Trophy a week later? We’ll never know.

We covered this game a few weeks ago.

The game that sent Texas to the Cotton Bowl to play for a national championship is one of the greatest regular season wins Texas has ever had. This road win had Texas trailing 14-0 entering the fourth quarter. But instead of “surrender cobra” the Longhorns scored 15 points in the fourth quarter, including a 42-yard run by James Street, and stunned Arkansas. Using the wishbone, Steve Worster (94), Street (73) and four other carriers combined for 244 yards rushing. Texas would beat Notre Dame a month later and claim its second national championship under Darrell Royal.

We’re  not sorry that this game has made so many of these countdown lists.  It is considered one of the greatest, if not the greatest, college football game ever.

Read about this game here.

Breaking down Texas’ 2016 schedule: At Kansas