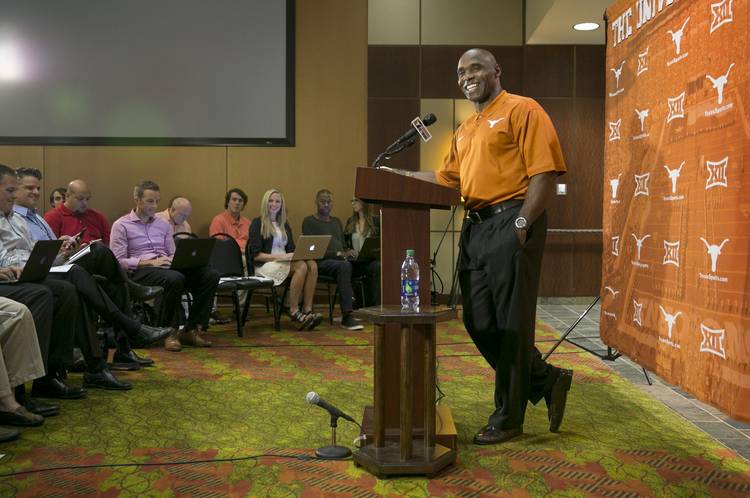 Truth be told, Charlie Strong has a strong dislike for the drama that sometimes engulfs the Texas athletic department. “We create our own drama,” he said in 2014.

So it’s odd that Strong would be the one manufacturing it.

On Monday, the Texas coach refused to name his starting quarterback for Sunday’s season opener against 10th-ranked Notre Dame. Basically, Longhorns fans who can’t get into Royal-Memorial Stadium must tune into ABC’s broadcast and find out.

“Well, I know who we’re going to start,” Strong said. “But Sunday, we’ll see who runs out there.”

So why not announce whether it’s senior Tyrone Swoopes or freshman Shane Buechele and let the fans get excited?

“The fans, they’ll be fine,” Strong said. “You need to know so you can write it, huh? But I’ll say this. Both of those guys are competing. It’s been a great matchup. The team is going to know who the starting quarterback is. Some of them probably already have an idea who they want.”

Sunday’s game is already loaded with pageantry. Bevo XV will have his grand unveiling. Olympic gold medal winners Kevin Durant and Tristan Thompson will be honored. Gov. Greg Abbott will serve as honorary captain. A dash of intrigue makes for great entertainment, right?

Strong did admit that “whomever the starter is will end up being the starter.” His Yogi Berraisms aside, Strong means there is no two-quarterback rotation. Whoever trots out first against the Irish is the clear-cut No. 1.

“I don’t know who it’s going to be. I honestly couldn’t tell you,” receiver John Burt said. “Both quarterbacks are getting reps with the (first team). So, really it could be either one at this point.”

Judging from the players’ reactions and comments, they seem to believe Swoopes and Buechele are indeed interchangeable. That’s probably just what offensive coordinator Sterlin Gilbert wants to hear, too.

Asked what he’s been telling fellow students, receiver Jacorey Warrick said, “I tell them I don’t know. I truly don’t know. Both of those guys are more than capable of running this offense.”

Tight end Caleb Bluiett said, “No idea. You’re going to have to see on Sept. 4 who comes out on the field.”

Zaire authored the dramatic 38-3 win over the Horns last season, but got hurt the following week. Kizer finished the season and posted an 8-3 record as the starter.

The quarterback news, or lack thereof, sucked up almost all the oxygen at UT’s first press conference of the season. But there was other news. Strong said all the key players who were sidelined during training camp should be cleared for Notre Dame.

The Longhorns did not release a depth chart, either. But right tackle Tristan Nickelson and center Zach Shackelford should be ready.

There was little talk about the defense, which needs to show improvement this season. Defensive tackle Paul Boyette Jr. said the players’ commitment level has grown since last year’s blowout. Some players wore dog tags, which are given out only by the coaches, for going above and beyond in training camp.

“I just expect everybody to have fun and go out there and compete at the highest level,” Boyette said.

True freshmen Buechele, Shackelford and receivers Collin Johnson and Devin Duvernay are all expected to play. Strong also called out freshman receiver Lil’Jordan Humphrey as someone to watch for. On the defensive side, Strong said freshmen will be used mostly as role players.

Texas officials were the ones who agreed to move this game to Sunday night. The Longhorns have the national stage all to themselves.

It could be quite a show, one way or the other.

Texas countdown to football: 5 Longhorns from East Texas to remember

Texas countdown to football: 5 times the Longhorns got revenge