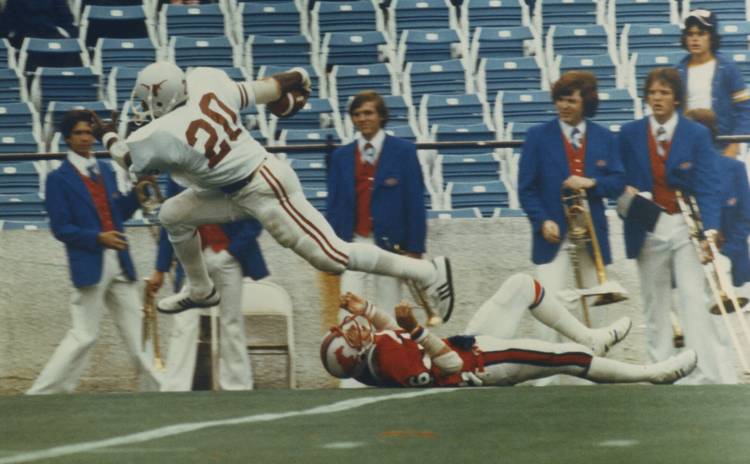 The final stop in the “countdown Texas road trip” is East Texas. And more talent has come from East Texas than anywhere else one the map. Let’s get to it.

Here are five Longhorns from East Texas to remember:

If we had to take a guess as to who the greatest professional Texas Longhorn football player will be, it would be hard to see anyone topping Earl Thomas if his career continues to do what it’s doing. He’s on pace to be a first ballot NFL Hall of Famer. He’s never not made a Pro Bowl since entering the league and he’s been All-Pro three times. He won a Super Bowl and he is the best player on the league’s best defense the last five years. At Texas, Thomas was a consensus All-American in 2009 and a first team All-Big 12 selection that same year. He only played two seasons for the Longhorns, redshirting a year and then declaring for the NFL draft after his sophomore season. He picked off eight passes in 2009, the same year Texas went to the BCS National Championship Game. At West Orange-Stark, he had 11 career interceptions and rushed for 8,850 yards in his career.

Speyrer’s huge plays against Notre Dame in the 1970 Cotton Bowl and against UCLA in the fall of 1970 are legendary.  He was one of the first star wide receivers for the Longhorns, who at the time were running the wishbone offense. He was an All-American in 1969 and 1970 and All-Southwest Conference in 1969. He led the team in receiving in 1968 and 1969. Against Notre Dame in the Cotton Bowl he had 161 yards receiving and two touchdowns.  The Washington Redskins took him in the second round of the draft in 1971.

Saxton is a College Football Hall of Famer and played at Texas from 1959-1961. The running back averaged 7.9 yards per carry. Sports Illustrated once named him “Football’s Fanciest Runner” in 1961, when he was on the cover of the magazine. He was an All-American and finished third in the Heisman voting his senior season, losing to Syracuse’s Ernie Davis and Ohio State’s Bob Ferguson.  He played just one season in the NFL, for the Dallas Texans.

There have been two Longhorns drafted No. 1 overall, and both are from East Texas. Sims is one of the greatest defensive players in Longhorn history. He was the 1981 Lombardi Trophy winner and UPI Lineman of the Year in 1981. He is fourth in program history with 29 career sacks and is tied for third all-time for single-game tackles for a loss with six against SMU in 1981, the same year he had 21 tackles for a loss in a season. He was an All-American his senior year.

The Patriots took him No. 1 overall and he battled through injuries throughout his career and never quite lived up to being drafted over NFL Hall of Famers Marcus Allen, Mike Munchak and Andre Tippett and Super Bowl winning quarterback Jim McMahon.

But forget that. Sims was sensational as a Longhorn and is in the Hall of Honor.

Texas High School Football, College Football and Pro Football hall of famer, Earl Campbell. The Tyler Rose is the 1977 Heisman Trophy winner and is one of the greatest players in program history. We covered him here.