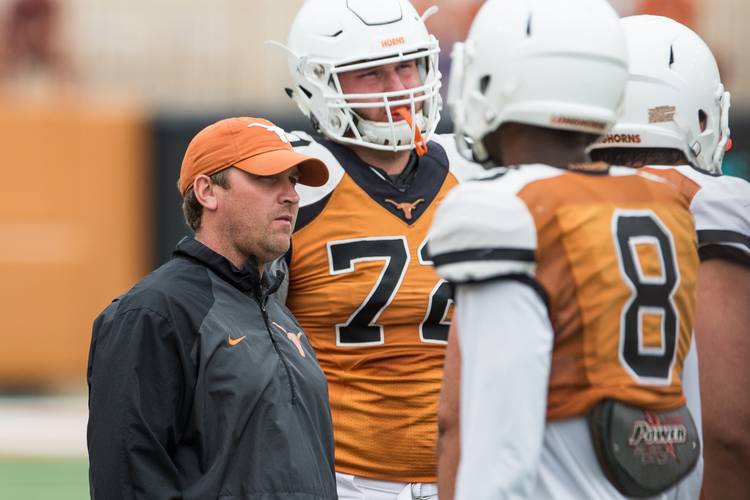 If Texas undergoes an offensive renaissance this season, Charlie Strong has only one man to thank.

Strong has turned the keys over to new offensive coordinator Sterlin Gilbert and offensive line coach Matt Mattox, who both grew from the Briles’ coaching tree.

Sure, they may be thin branches — Gilbert was a graduate assistant under Briles at Houston in 2005, and Mattox filled the same role in 2006 — yet there’s no mistaking the former Baylor coach’s influence on what the Longhorns will do offensively this season, widely perceived as a make-or-break third year for Strong.

“Coach Briles was a very, very vital part of why I’m sitting here at the University of Texas today,” Gilbert said shortly after being hired last December. “If you can have a little bit of Art Briles in you, I think that’s a positive thing.”

Set aside everything you think you know about what happened off the field in Waco. Simply focus on what happened inside McLane Stadium. Look at how the Bears led the nation in scoring in 2013, 2014 and 2015. It’s awe-inspiring how Baylor averaged more than 600 yards twice in the last three years. Nobody’s going to take away the Bears’ back-to-back Big 12 titles from 2013 and 2014.

Sure, it’s a timing-based system, and it took Briles several years to really get moving in Waco. But Gilbert and Mattox have a better starting position than Briles did when he arrived there in 2008.

The Bears utilize tall, athletic, fast receivers as bookends, and Briles loves to send them deep. The Longhorns have two themselves in John Burt, a 110-meter hurdler, and Collin Johnson. Burt is listed at 6-foot-3; Johnson is 6-foot-6. It doesn’t take much imagination to see them run straight downfield often in one-on-one situations.

Baylor deploys quick receivers in the slot. That’s exactly why Briles wanted Devin Duvernay, a 5-foot-11 lightning bolt who ultimately landed at UT after Briles was fired. Jerrod Heard played quarterback last season, but asked to move to receiver. Strong has admitted Heard, a dynamic runner, is simply too good to keep off the field.

It comes down to the quarterback. Who’s better to run this offense, senior Tyrone Swoopes or freshman Shane Buechele? This is another area Briles should get credit. He crafted an offense that just might showcase both.

The key? Watch the safeties

Strong is a defensive coach. He knows that every quarterback must first read the safeties at the line of scrimmage. Defenses usually play two safeties high, lined up near the hash marks, or one in the middle of the field.

Briles’ system is all about reading the safeties and making decisions from there. In a two-high safety look, the defense is unlikely to blitz. Run plays have a higher probability of success. If the quarterback sees only one safety, a blitz is likely coming, which means passing opportunities are present.

One of Briles’ key ingredients is how he packages plays together, something Texas left tackle Connor Williams alluded to during training camp. “The passing game and running game is all combined now, so we’re all working as a team,” Williams said.

The receivers are stretched all over the field, sometimes literally just a few steps off the sideline. That forces the defense to spread wide, too. In some cases, the receivers are running mirrored route patterns, so the quarterback knows what is happening on both sides of the field.

Theoretically, it’s simple. Imagine this on a single play: Burt and Johnson take off on vertical, or “go,” routes. Duvernay and Heard run down the seams, and then Buechele executes a delayed handoff to Foreman charging up the middle.

Or, what if Swoopes runs play-action with Warren, sucking in a linebacker or at worst freezing him momentarily? That allows for Swoopes to pull up and hit Duvernay or tight end Caleb Bluiett racing down the middle.

“You have guys you can put on the field now and whoever touches the ball, you feel pretty good with the ball in their hands,” Strong said.

Now, do all of that at breakneck speed, maybe as fast as 10-15 seconds between plays.

How many 300-pound defensive linemen can fight off double teams, try to make plays, get up, get lined up an be ready down after down? Texas’ offensive line, which is heavier across the board this season, should be a plus.

By going so fast, it negates the opposing team’s defensive pass rush to an extent. With quarterbacks taking only three- to five-step drops, pass rushers don’t have much time to reach the quarterback. Baylor had the fewest sacks allowed in the Big 12 last season, giving up only 1.15 per game.

Under Gilbert, Texas ran 110 plays in the spring game in only one half. The second half was rained out. Texas ran 781 plays all last season. Baylor ran 1,103.

That’s why it boils down to how well the quarterback reads the defense, shows good decision making, completes a high percentage of throws and can do all of this in an up-tempo fashion. It’s not easy. It simply takes laborious practice.

Gilbert may have learned from Briles. But he is ready to take control and show he can run it just as good as anyone.

“I’m extremely excited, motivated, determined to get to the mark,” Gilbert said.

Texas countdown to football: 5 times the Longhorns got revenge