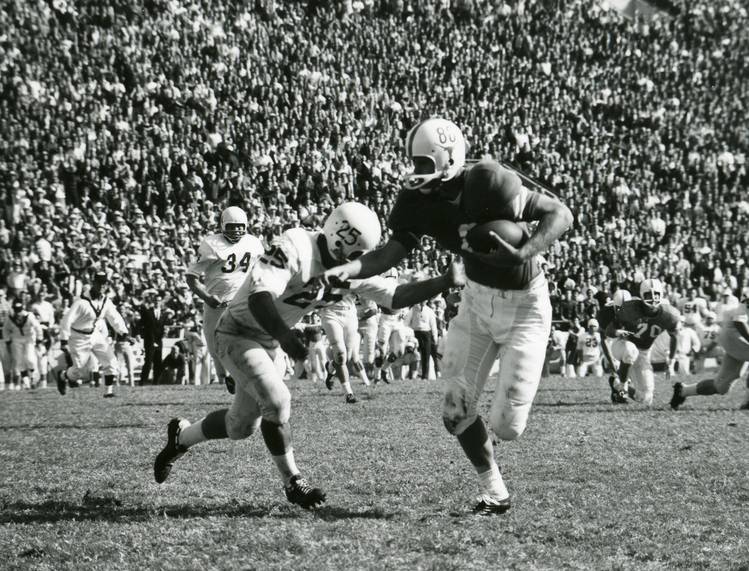 We’re days away from the Texas-Notre Dame game that is a rematch from last season’s dud of a Longhorn game. Texas lost 38-3 in South Bend.  It was ugly.

Or any of the thousands of movies, books and songs that deal with getting revenge time. (Personal favorite: “Payback“).

Yes. It’s time for Texas to get even with the Irish.

The Longhorns are actually pretty familiar with the “what comes around goes around” nature of football. From 2012 to 2015 Texas has returned the favor six times. Texas lost to West Virginia in 2012, but won in 2013. Twice Kansas State has received payback. Baylor, Oklahoma and Oklahoma State as well.

But what are some of the best payback games in Texas history?

Here are five games Texas football won a year after losing to the same team to remember:

Oklahoma beat Texas 12-0 in a matchup of the No. 2 and No. 4 ranked teams in the nation that year. The Sooners went on to play in the BCS National Championship Game for the second year in a row. The game was so bad that all I really remember about it is that this was worse:

Texas beat USC in one of the greatest games ever played a few months later to win the national title.

Then came 1995. Texas took a 6-0 lead into half after freshman Ricky Williams scored a 21-yard touchdown. Texas never allowed the Aggies to find the endzone and Williams scored again (he kind of loved playing against Texas A&M) and Phil Dawson added a field goal to clinch the win and snap the losing streak. It was the last Southwest Conference game Texas played.

And while we’re at it, Texas then came back the following November in 1996 and beat Texas A&M 51-15 (yes, Ricky Williams scored a 55-yard touchdown in this game).

Southern Methodist University, ranked No. 4 in the country and led by the Pony Express featuring Eric Dickerson, beat Texas 30-17 in Austin. Texas was ranked No. 19 in the game, but three interceptions and two lost fumbles were enough to doom the Longhorns.

The next year, with both team undefeated and Texas ranked No. 2 and SMU No. 9, Texas scored nine points in the fourth quarter to edge SMU 15-12 inside Texas Stadium. Texas finished the game by tackling Lance McIlhenny in the endzone to secure the win with 54 seconds left.

Oklahoma beat Texas 31-10 in 1978. Texas was ranked No. 6 that season while Oklahoma was No. 1. The Sooners finished third in the final AP poll, beating Nebraska in the Orange Bowl 31-24 in what was a rematch of Oklahoma’s only loss that season. The Sooners were led by Heisman Trophy winner Billy Sims, and against Texas, Sims looked the part while scoring two touchdowns.

Texas finished 9-3 that season and finished 9th in the AP poll.

The next season, Oklahoma was preseason  No. 3. And they were No. 3 in the nation when they played the No. 4-ranked Longhorns. Texas used 130 yards from A.J. Jones on the ground and a touchdown pass from Donnie Little to beat Oklahoma 16-7.

It was the only loss Oklahoma suffered that season and the Sooners finished third in the AP poll.

Yes. This what gave us the “TCU is like a cockroach” quote from Darrell Royal. In 1961, No. 1-ranked Texas lost 6-0 to un-ranked TCU in Austin. it was the only game Texas lost that season and cost Texas a sure national title. Had Texas won, the Longhorn would have been 11-0 following a win over Mississippi in the Cotton Bowl. TCU  scored on a 50-yard pass in the game. Texas blocked the extra point, but couldn’t find the endzone and managed just 200 yards of offense, which was only eight less than TCU had in the game.

A year later, leading up to the game, here’s what Royal said to Port Arthur News in February of 1962:

“History proves that the lowest team in the conference can rise up and defeat the leader. It has happened time and time again and that’s why I really wasn’t too surprised when we got beat by TCU last season. Of course, I was disappointed, but not surprised.  That situation is kind of like the cockroach,” he quipped, “it’s not so much what he gets into and carries away but what he falls into and messes up.”

Later that year, in Fort Worth, Texas broke a scoreless tie in the third quarter as Ray Poage scored two touchdowns and Texas won the game.

What can Texas’ new offense look like? (Ask the Baylor Bears)