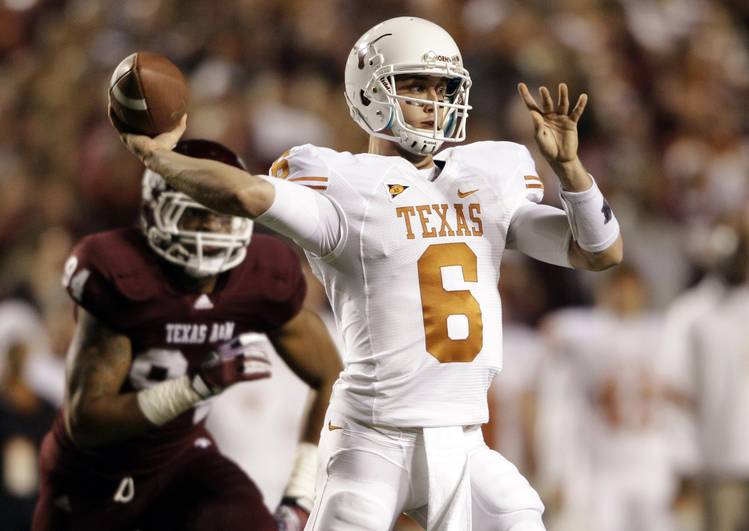 On the evening of Nov. 24, 2011, the rivalry died. Will it ever be revived? Earlier this month, the two schools began talking about playing again. Perhaps they’ll play on Labor Day in years to come says one columnist.

But just did how did The American-Statesman pour one out for the rivalry that started in 1894?

Below are some prophetic words from the Statesman’s Kirk Bohls penned on the eve of the last Aggie-Longhorn clash:

Texas and Texas A&M played each other in football for the first time in 1894.
Not that much has changed since then.

In 1894, Coca-Cola was sold in bottles for the first time. I’m a Pepsi guy, but I think they still sell Coke in bottles but not sure you can find New Coke in anything.

In 1894, Coxey’s Army marched on Washington as the first meaningful American civil protest. The object of their discontent? Unemployment and economic depression. Americans are still Occupying everything from Wall Street to Main Street, but I don’t think they used pepper spray on Jacob Coxey when the populist dared walk on the grass at the U.S. Capitol.

The more things change, the more they used to stay the same.

We’re still electing lawyers, getting recharged through soft drinks and worried about jobs.

Aggies and Longhorns? Not so much. No more.

And Texas will be worse off because of it.

So will the Aggies, who have to wonder if they can hate Vanderbilt with the same fervor they have for whom they call teasips (V-sips anyone?). Both sides share the blame, although DeLoss Dodds told me this week he believes A&M (read: A&M president, regents, fans) really wanted to head to the Southeastern Conference more than a year ago.

“I thought they wanted to leave last year, ” the Texas athletic director said. “I thought they were disappointed we didn’t go to the Pac-10 because then they could have left.

“Hard feelings will pass, but I believe they belong in the Big 12. I want them in the Big 12. If they decided tomorrow to come back, it’d be the right thing for them and for us.”

But we all know that’s too late. I think this series will be renewed at some point, maybe after the two schools’ current athletic directors have left.

Both sides are to blame in this spitting match, but Texas can always state it was the one that stayed in the Big 12. A&M can’t say the same.

A&M loses, too, probably more than Texas because of the likelihood of less success in the SEC in football, basketball and baseball, tougher and more expensive travel for fans and family, and mostly the separation from its No. 1 rival. Who knows how relevant the Aggies will be?

But Texas loses a primary rival, too, one it’s faced on the football field for, ahem, only 117 times. It doesn’t really matter who’s right and who’s wrong and who’s to blame. That’s what a rivalry does. It gives one bragging rights to say one’s better, at least for 365 days.

Both sides will be worse off, but Texas at least has OU to despise. And play.

The absence of this game will have no negative economic impact on either school except for a harder sell for Longhorns season tickets with no home game against the Aggies in even years. (A&M should be fine, with the Alabamas and Floridas showing up – unless bad records deter Aggies from showing up.)

The end of this series hurts Texas high school football, because it lacks a proper national showcase on a stand-alone night on Thanksgiving, but interlopers won’t stop coming here for close to 400 Division I recruits every year.

The ever-popular Lone Star Showdown bites the dust, but Dodds told me IMG is working on a possible replacement for that.

If you listen to Mack Brown, however, this game is no big loss. He couldn’t be any more disingenuous, especially as one who claims to love the sport that’s made him millions and a household name. Without A&M, without rivalries that fill the stands, Mack has no $5.2 million salary, and there is no Longhorn Network. There is still a Longhorn Network, right?

“I don’t think it’ll make any difference, ” Brown said Monday about the last Aggie-Longhorn meeting. “Texas is going to be Texas. A&M’s going to be A&M. There’ll be other rivalries.”

No, there won’t. That’s totally bogus.

Baloney. Turkey Day is A&M-Texas. And it’s dead wrong to end a series that has meant so much to so many and provided so many treasured memories.

Of course, it’s the direction that too many college football rivalries have headed of late: to the trash bin.

Nebraska-OU. Died after 1997 as an annual series. Just 71 consecutive games, including a fairly memorable Game of the Century.

What’s next? No Alabama-Auburn? Ohio State-Michigan? Florida-Georgia? Yankees-Red Sox? No LeBron James vs. Twitter World? No Lakers-Celtics? Guess the lawyers took care of killing that one.

Both Dodds and A&M athletic director Bill Byrne said they think the two football programs will meet again. As Byrne said, “DeLoss and I both work really hard, and we don’t back down.”

Nor should they. That’s what makes for a little friction and one terrific rivalry.

Just not for very long.

Our preseason Big 12 of the Big 12: It’s the year of the quarterback