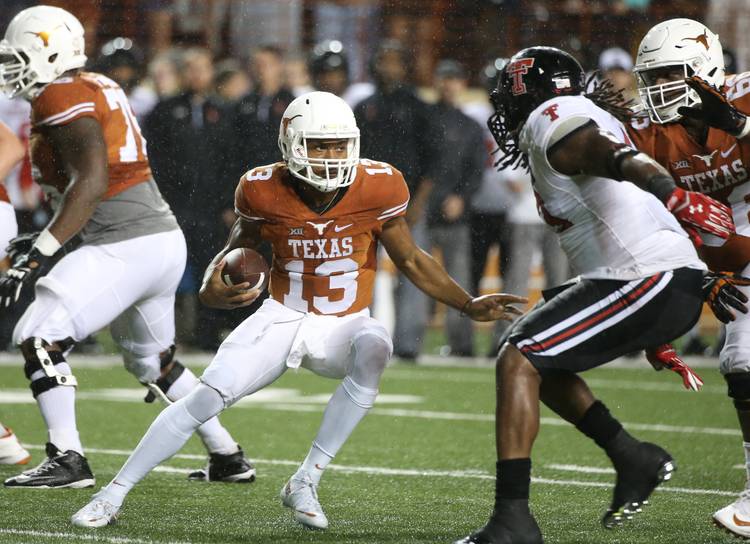 Every week this fall, we’re looking at a number related to Texas football. Today’s notable number is four.

Four is the number worn on the jerseys of Texas safety DeShon Elliott and 2017 recruit Sam Ehlinger, a quarterback from Austin’s Westlake High. Texas has won four national championships — 1963, 1969, 1970 and 2005. As for Texas’ team record for interceptions in a single game? That would be the four grabbed by Bill Bradley in a 1968 duel with Texas A&M.

Four also is the number of catches that Nevada receiver Hasaan Henderson averaged per game in 2015. Henderson, who caught 52 passes in 13 games, ranked in a tie for 127th in the country in catches per game. Henderson caught 29 and 45 footballs during the 2013 and 2014 seasons, and he enters his senior year ranked 20th in career receiving yards in Nevada’s record books (1,646 yards).

Why are we talking about a Nevada wide receiver ahead of Texas’ season opener against Notre Dame? Because Henderson, like Texas sophomore Jerrod Heard and freshman Kai Locksley, was once a college quarterback. He signed with Nevada as a quarterback in 2012, but, like Locksley, moved to receiver after his redshirt season.

The 6-5, 220-pound Henderson differs in size from Heard (6-3, 201) and Locksley (6-4, 198). Henderson, though, was the first quarterback-turned-receiver to show up on the catches-per-game stat sheet for the 2015 season, so perhaps his track is one that Texas fans should hope Heard and Locksley follow.

On Tuesday, offensive coordinator Sterlin Gilbert said Heard and Locksley “absolutely will contribute to what we’re doing this fall,” although the ex-quarterbacks’ positioning on the receivers’ depth chart has yet to be revealed. Longhorns head coach Charlie Strong said in a Monday teleconference that Heard and Locksley switched positions because they wanted to play this season, and he added that “It has been a learning curve, but they’re athletic and they have good speed and good hands and it’s not very hard for them to catch up.”

Switching from quarterback to receiver isn’t easy. Remember, Henderson tied for 127th among FBS receivers in receptions-per-game. Hands must be used in a different way and running routes must be learned. John Burt, who is Texas’ returning leading in receptions (28) and receiving yards (457), expressed optimism that both Heard and Locksley would be able to make that transition.

“Both of them were playing quarterback before, so they’re still picking up on the receiver side of playing,” Burt said. “They’re not doing too bad. Playing quarterback, they already have a feel for what the receiver is supposed to be doing on plays. Really, it’s just about going out and executing it.”

Last week, Heard said his transition to the new position was going well. He said he had researched other quarterbacks who had made a similar switch and had been gathering advice from teammates like Jake Oliver. In a scrimmage last week, Heard hauled in a 50-yard touchdown pass.

Heard said he hasn’t given up on being a quarterback, and laughed a little while answering a question whether he was now a wide receiver. “I’m a receiver, a wildcat, you’re going to see me a lot, so it’s going to be fun and interesting,” he said. “I’m all across the board and just an athlete, really.”

Texas needed a kicker, Trent Domingue needed a team, and a match was made