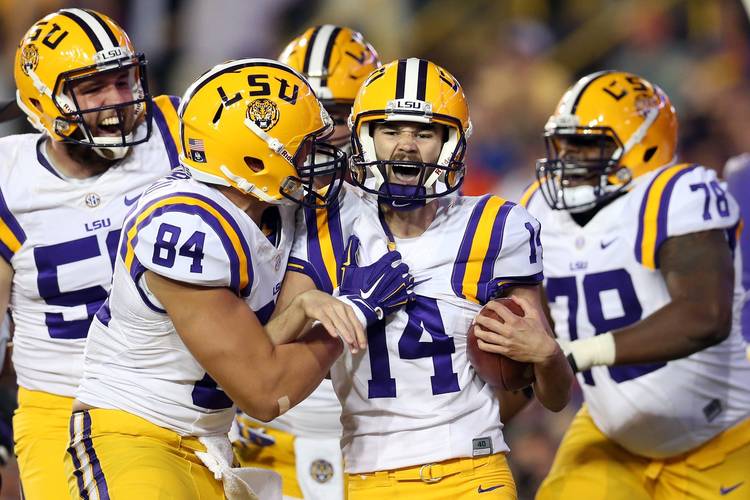 LSU's Trent Domingue (14) celebrates after scoring a touchdown on a fake field goal against the Florida Gators at Tiger Stadium on October 17, 2015 in Baton Rouge, Louisiana. (Chris Graythen/Getty Images)

Texas needed a kicker, and Trent Domingue needed a team.

But to say their rushed union in late July was a perfect marriage would be unfair because Domingue had already found his soulmate. And she deserves credit for Texas solving the biggest hole on its roster.

Welcome to recruiting in the digital age.

If not for the keen eye of Emily Chastain, a graduate student at South Alabama who accepted Domingue’s marriage proposal last Christmas, Charlie Strong would’ve been bracing for a kicking situation he described a week prior to Domingue’s arrival as the top concern on his team.

The prospects were so bleak, in fact, that after spring ball the leader at the position was actually a punter, walk-on Mitchell Becker. Without a quick fix, or so it seemed at the time, Strong had hoped simply to identify someone who could make a kick from 40 yards.

And then Domingue (pronounced Domain) dropped from the sky.

A graduate transfer from LSU, Domingue made 10 field goals in a row last year, with a long of 45 yards. Overall, he was good on 13 of 17 attempts he helped beat Florida with a 16-yard touchdown in the fourth quarter on a nifty fake field goal. Domingue was a Lou Groza semifinalist.

“If he’s kicking the way he’s been kicking these last few years at LSU, I assume he’ll have no problem being a great kicker for us,” safety Dylan Haines said.

Early in fall camp, Domingue discussed his journey to Austin — and the irony of how he’s being viewed as something of a savior even after effectively being dumped by LSU; the Tigers, in mid-July, declined to renew his scholarship and instead gave it to another kicker on their roster.

Domingue, suddenly scrambling for a new school, considered several options “in the South,” but found comfort at UT by rekindling a rapport with defensive line coach Brick Haley, whom Domingue knew when Haley coached at LSU.

Domingue, while acknowledging that his circumstances “sucked,” has handled it all with class, saying “I love” LSU coach Les Miles and expressing empathy for Miles and the decision he made because “coaches are coaching for their livelihood and they have to make business decisions.”

It follows that with such humility, Domingue refused to acknowledge early in camp that he’d be UT’s kicker. “I want to compete and make sure I’ve won the starting job,” he said. Likewise, he speaks modestly about his talents, suggesting his range for a field goal extends to 52 yards — a chip shot compared to the 70-yarder his predecessor, Nick Rose, told reporters he could make in response to the same question last year.

Yet, fairly or not, Rose will be remembered most for the extra point he missed at the end of a one-point loss to Cal.

Unlike Rose, Domingue is not much for adventure. Asked if he could execute a backflip into a field goal — which Rose did in a video that went viral — Domingue cracked he’d “probably break my neck.”

With its kicking game solidified, the belief is UT now has one fewer obstacle to a successful season.

“I can just tell the mindset of the players and the coaches and they don’t want to do what they did last year,” Domingue said.

Texas countdown to football: 5 places to watch a Longhorn game