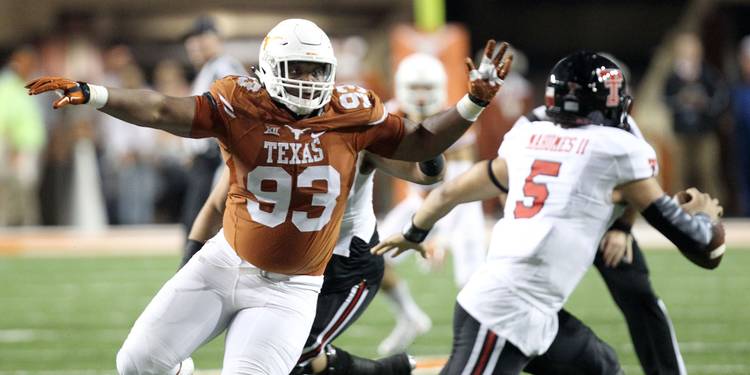 On the football field, Texas senior Paul Boyette, Jr., lives by a lesson taught to him by his father.

“He was drawing up plays when I was little,” the defensive tackle recalled. “He said ‘If that X can’t dominate that O, then I think for the most part, what are you doing?’ I still live by that to this day.”

In order to be successful on Sunday against Notre Dame — and avoid repeating last year’s 38-3 loss — a lot of the Texas Xs will need to dominate the Os on the Fighting Irish offense. Anchoring that defense will be an inexperienced line, which must get the best of a Notre Dame offensive line that is set to start two seniors and three juniors.

Texas defensive coordinator Vance Bedford can plug players like Boyette (37 tackles, three sacks in 2015), junior Poona Ford (39 tackles, 2.5 sacks) and sophomore Chris Nelson (seven tackles, one sack) into the heart his line, but the Longhorns lack experience in the trenches. Six of the linemen on Texas’ roster are freshmen, and nine of those 16 linemen have never played in a college game.

Citing the success of Alabama and Clemson, Bedford said Wednesday that he would ideally like to rotate seven or eight players on his defensive line. That means, though, that the freshmen will need to grow up quickly.

“Our defensive linemen, they’re all pups,” Bedford said. “They’re going to be good players, but they’re still babies. You’re 17, 18 years old and you’re going against guys who might have been in a program three or four years. Physically, they look the part, but mentally, they’re not ready for it. That’s what we’re dealing with right now.”

During the offseason, Boyette said defensive line coach Brick Haley told his veterans to “police our room and make sure guys understand what they need to do.” Haley also had Boyette, Ford and Nelson take a couple of freshman linemen under their wings.

Boyette has been mentoring Jordan Elliott, a newcomer from Houston Westside, and Euless Trinity’s Chris Daniels. On Monday, Boyette said his main focus this season is to be a leader.

“Like they say, the eyes of Texas are upon us all the time,” Boyette said. “For the most part, the coaches and the coaching staff have really instilled their wisdom and knowledge in me. I think going out there and competing on the highest level and showing the guys under me how to represent the school on and off the field is very important.”