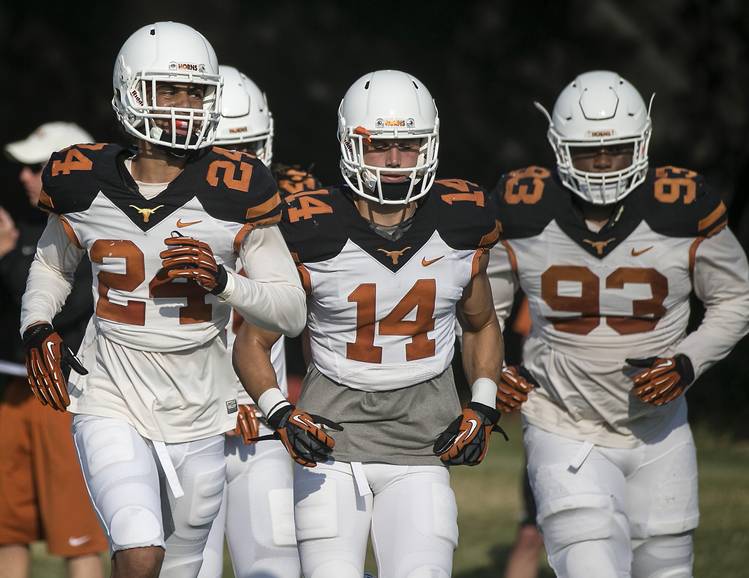 Tyrone Swoopes thinks he’s got it bad? The Texas quarterback should check out Dylan Haines’ merry band of haters.

It’s rather impressive when a defensive player can draw quarterback-like criticism, the majority of which spews from know-it-alls cloaked in anonymity.

“I don’t know why you’d want to hate on Dylan Haines,” senior linebacker Tim Cole said. “If anything you should admire this guy.”

Maybe it’s because the Longhorns’ starting safety is a former walk-on from Lago Vista. No stars, no scholarship offers, no reason to think Haines would ever get this far.

He’s a five-time member of the Big 12 Commissioner’s Honor Roll, so grades aren’t the issue. He’s led the team with nine interceptions the last two seasons, so Haines must have some ball-hawking capabilities, right? Haines has 200 career interception return yards, the second-most in school history and 62 shy of a new record.

And yet, there’s a group of fans out there just waiting for Haines to get replaced. By somebody? Anybody! Anyone other than the 6-1 senior who has started 23 of UT’s last 25 games.

“A lot of people want to see me get pushed off by someone younger or talented or athletic in their eyes,” Haines said. “I see that all the time. It gets sent to me and my parents and stuff like that. I don’t have anything to prove to those people, per se.

“But just to myself, I’m going to stick with the same thing that’s gotten me to where I am, which is I know I’m good enough to play here,” he added. “I’ve proven myself time and time again.”

Haines said he feels a responsibility to play hard for only certain people — namely the Texas coaches and his parents. “I have nothing to prove to anyone or even myself. I just want to make the people that allowed me to be here proud,” Haines said.

By staying on the field, Haines admits that he gets a sense of satisfaction “even though it sounds kind of twisted.”

Part of the issue stems from Haines’ position. As a safety, Haines can find himself all alone in center field, so to speak. That leaves him exposed, and in some cases, he’s been just that in front of everyone.

Take last season’s Notre Dame game, for example. Haines played back in the end zone, which allowed for open space at the goal line. Will Fuller caught an easy 16-yard touchdown catch right in front of the Texas safety.

Then in the second half, Fuller ran past cornerback Duke Thomas and reeled in a 66-yard touchdown. Thomas went ballistic on the field. He expected over-the-top help from Haines.

While those two plays looked bad, Haines finished the year with 47 tackles, a team-high five interceptions and three pass break-ups.

“He’s Mr. Reliable as far as I’m concerned,” defensive coordinator Vance Bedford said. “People forget the plays he has made for us. You can do nine things right and do one thing wrong. Guess what people are going to remember? And they’re going to blow it out of proportion.

Haines earned his scholarship before the 2014 season, yet he admitted he still considers himself a walk-on. The label’s hard to shake, apparently. The number of players who have followed Haines’ path to succeed in major college football must be microscopic.

“If anyone that’s interested in a football at a young age, I’m a walking, living example that if you come, it doesn’t matter how many stars you have out of high school or how many offers you have,” Haines said. “I had zero stars and zero offers. If you think you can play, you work hard and do the things you’re supposed to, you can have a spot on a Division I college football team.”

That doesn’t mean Haines is dismissive of sophomore DeShon Elliott and freshman Brandon Jones, who was rated the nation’s best safety recruit by Scout. He’s simply not ready to yield the floor. At least not yet.

“If someone were to come in and prove they can go out there and prepare hard, make more plays and be more consistent, then they have every right to start over me,” Haines said. “Until that happens, I’m going to stay where I’m at.”

Texas countdown to football: 5 places to watch a Longhorn game