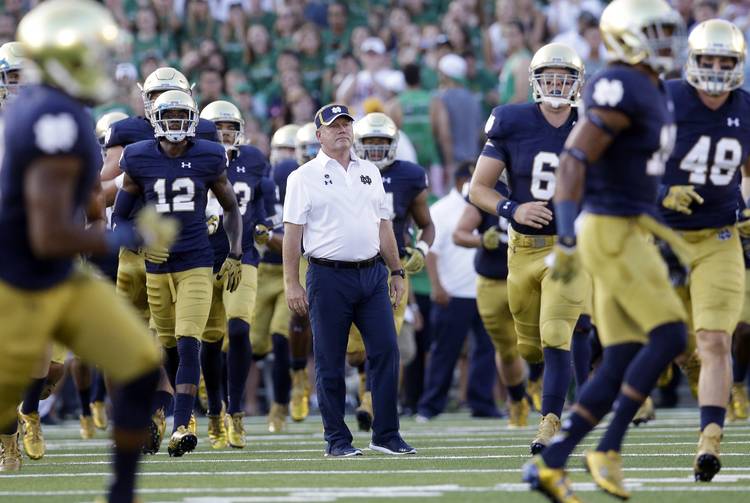 Each week of the season, the American-Statesman will interview the beat writer of Texas’ opponent. This week, the Chicago Tribune’s Paul Skrbina offers insight on Notre Dame. You can find Paul on Twitter at @ChiTribSkrbina:

At No. 10 in the AP’s preseason poll, are the Fighting Irish overrated, underrated or properly-rated?

My stock answer to preseason rankings questions always is, “I don’t know.” But I’ll play along and say probably properly rated at this point. Look, the Irish lost a lot (seven players picked in NFL draft alone), but they also have a ton of talent, especially on the offensive line.

Forget the quarterbacks, who will Notre Dame be throwing to this season?

The plan now is for Torii Hunter Jr. to be the primary target. But he’s mostly unproven, what with 35 catches and three touchdowns in two seasons. Sophomore Equanimeous St. Brown could also become a favorite target of the musical-chair quarterback plan.

Aside from quarterback, are there any other position battles that are worth keeping an eye on?

Nothing as sexy as the QB competition or collaboration or whatever this turns out to be.

Considering its off-season losses, what should people expect from Notre Dame’s defense this fall?

Losing a Jaylon Smith or a Sheldon Day is not ideal. But the Irish linebackers, led by Nyles Morgan and James Onwualu, and their line should be fine. The back of the defense, once again, is the question mark. Starting safeties Drue Tranquill and Avery Sebastian both are coming off season-ending injuries.

Have you noticed a sense of over-confidence among the Notre Dame players heading into this weekend since they did record that 38-3 win over the Longhorns in 2015?

Not even a little.

Name one Notre Dame player that Texas fans aren’t talking about — but should be.

Morgan. Thanks to injuries to others, the junior played a lot as a freshman in 2014. He hardly saw the field last year. This could be his breakout season.

I’m not much of a foodie, but I’m always open to suggestion. BBQ preferred.