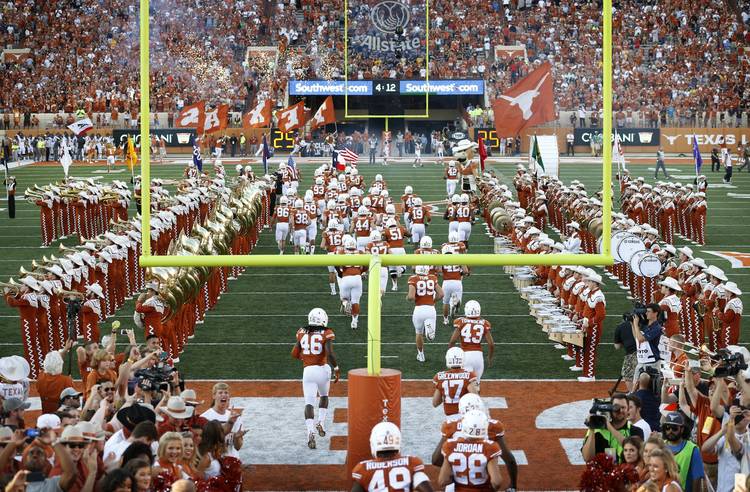 The Longhorns run onto the field for the start of the game against California at Royal-Memorial Stadium on Saturday September 19, 2015. JAY JANNER / AMERICAN-STATESMAN

Tyrone Swoopes or Shane Buechele? On this one, best to go straight to the top.

“Oh, now that’s the hardest question going,” said Texas Chancellor Bill McRaven, no stranger to trafficking in secrets. Pressed to pick his favorite, the former four-star admiral scoffed and said, “You’re not gonna get that out of me.”

Nobody’s talking over in the Texas football building, either. Tenth-ranked Notre Dame is probably ready for both, though. The Longhorns head into the biggest home game of coach Charlie Strong’s tenure feeling good about the senior Swoopes, the freshman Buechele and the dynamic supporting cast that surrounds them both.

Make no mistake, Sunday is a seminal moment in Strong’s three-year tenure. The game is sold out, a first in the Strong era. Mack Brown, Ricky Williams, Kevin Durant and other UT glitterati will be there. The school also will unveil Bevo XV, the new sideline mascot guaranteed to get the crowd revved up.

Thousands ache to see improvement from a program that’s gone 11-14 in Strong’s first two years and got blown out 38-3 in South Bend, Ind., last season.

Bluiett added, “If 100,000 strong or more can come in there with a whole bunch of energy — and I don’t care if nobody sits down, if it’s just standing room only — my passion can feed off theirs.”

From a crowd perspective, only a few Texas games in the last few decades truly stand out. The 1990 Houston game probably ranks first. Bryant Westbrook made the 1996 Notre Dame game memorable. Ohio State’s return trip to Austin in 2006 was electric. West Virginia’s Geno Smith energized the UT faithful in 2012.

Not all of those were Texas victories, either. But in each of those games, fans showed up with certain expectations. It was thought the Longhorns would play solid, fundamental football, a certain style that highlighted strong recruiting classes and reflected quality coaching.

While his losses outweigh his wins, Strong has reloaded the locker room with two excellent recruiting classes. Now, it’s time for them to shine.

“I would say (fans) are going to see the Texas football they always grew up watching,” senior linebacker Timothy Cole said. “We know the standard here. We know the history behind this program and stuff like that. We’ve been putting a tremendous amount of work in throughout the spring and summer. So you’re definitely going to see that.”

Clearly, the bold-faced names of UT’s past are buying in, too. “You can see that we’re turning a corner,” Colt McCoy wrote in an open letter to the Longhorns published on The Players Tribune.

McCoy wrote that pressure was a good thing. “I even craved it, because it pushed me to be the best version of myself,” he wrote.

Strong resisted the pressure to name a starting quarterback on Monday at his weekly press conference. Swoopes, who is 6-8 as a starter, is a known commodity. The 6-4 senior found his niche last season in the “18-Wheeler” package, where he made few decisions. Swoopes took the snap and ran off tackle for first downs or touchdowns.

Jerrod Heard, who started 10 games last season, is now playing receiver. So is Kai Locksley, who went into training camp fifth on the quarterbacks depth chart.

All signs indicate that Buechele will get the starting nod, or at least play extensively.

Some coaches may have real fears about playing a freshman quarterback. But in Gilbert’s spread offense, there is surprisingly little decision making. The entire system is based on pre-snap reads. Decisions are made based on how the safeties align themselves in the defensive backfield. The quarterback has a run or pass option on every play, and he runs the play based on how the defense lines up.

The Longhorns have a plethora of playmakers. John Burt and Collin Johnson could be dynamic out wide. Slot receiver Devin Duvernay may be the fast athlete on the team. The Horns have two hulking running backs in D’Onta Foreman and Chris Warren III. The offensive line is better, too.

Defensively, Vance Bedford used the word “horrible” to describe last year’s unit. UT’s defensive coordinator knows he’s on the hot seat, right alongside the head coach. The Horns must stop the run this season. Only problem is they may be relying on sophomore Malik Jefferson and six freshmen linemen to do it.

Strong admitted he put too much emphasis on Notre Dame last year. This summer, he simply put last season’s games on a loop inside the football building. He wanted the players to see all those missed assignments, blown plays and lost games. He wanted it to burn.

“Hey, you know what, we’re not that team anymore. That’s not us,” Strong said. “We’re a totally different team than we were last season, and I feel like that we’ve taken those steps to become a better football team.”

On Sunday, the Longhorns can prove him right.

Texas coach Charlie Strong is 4-8 against ranked opponents during his two-plus seasons with the Longhorns.