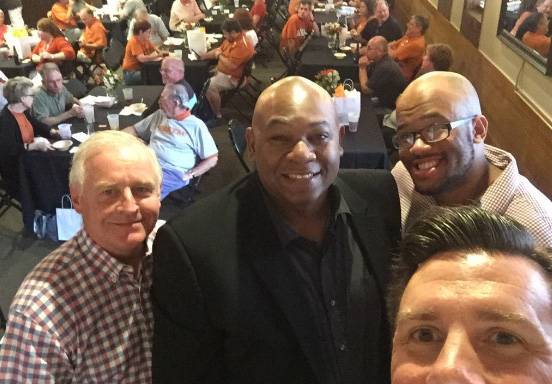 Kickoff is hours away and the tailgating smells are here as are the Fighting Irish of Notre Dame.

To help celebrate the start of the 2016 football season we’ve counted down five (some times more) things every day since July 27. What has happened since we started on July 27? Well, Michael Phelps went to Rio and won all the gold medals. Hillary Clinton became the first female presidential candidate. Reporter Ryan Autullo became a court reporter and OKLAHOMA LOST TO HOUSTON.

A lot has changed. So much so that you may need a refresher on who to follow today as Texas plays Notre Dame.

If you’re reading this story, chances are you’re already following Bevo Beat. You’ll get all the updates, scores and stories here. When Texas isn’t playing, you’ll get key recruiting updates, like this one from Saturday:

When reporter Ryan Autullo left the sports world this month to cover hard news for our metro team, longtime Statesman scribe Danny Davis joined the Texas coverage team. Davis has spent the last decade covering Austin’s prep scene and has hit the ground running in his week as a Texas reporter.

Cedric Golden is one of two Statesman sports columnists and hosts Hookem’s soon-to-be award-winning (it’ll happen) “On Second Thought” podcast with Kirk Bohls. Golden and his nuggets will be sprinkled throughout the season and don’t miss his halftime thoughts all season long. He doesn’t always cover the Longhorns, and spent the first Saturday in College Station watching the Aggies:

At the press box with @suzhalliburton and the new Kyle Field press is still swaying a bit. #goodtimes

If you’re a Texas Longhorn fan, you probably know Kirk. He’s been a part of the Statesman Longhorn coverage since the 1970s and has basically covered every significant Longhorn moment since then. Kirk, from Taylor, Texas and nicknamed “Duck” is also a co-host of “On Second Thought” with Cedric Golden. Like Davis, Golden and the reporter to come, Kirk will be giving updates from the press box all season long.

Kinda nice having football back.

Brian Davis has owned his beat since joining the Statesman in 2013. Davis won APSE’s Beat Writing of the Year award in 2015 and has helped break news on Charlie Strong and Shaka Smart’s hiring as well as the hiring of offensive coordinator Sterlin Gilbert last December.

Follow Davis and the rest of the Hookem crew today, tomorrow and all season long and enjoy the start of the football season!

Really appreciate everyone coming out for the @Statesman event at Scholz Garten. Folks pumped for the season. pic.twitter.com/cVmbC6qjks