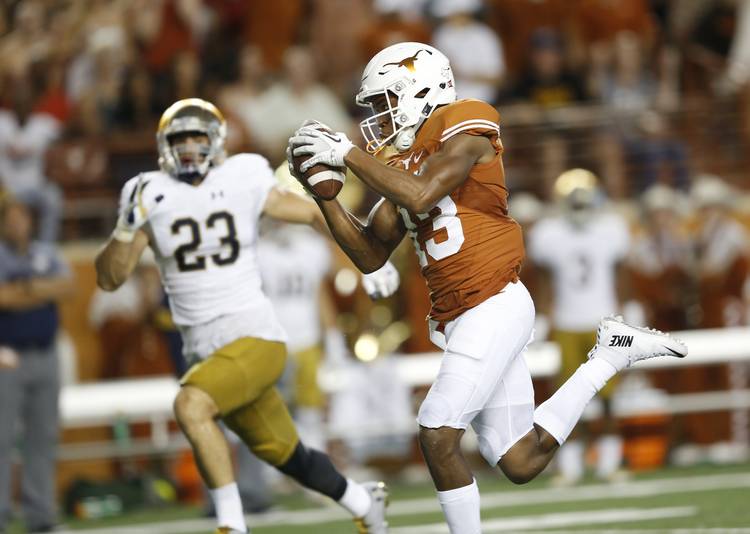 There were 162 snaps taken in Texas’ 50-47 win over Notre Dame on Sunday. Here are five that ended up making a big difference.

Well, duh. Tyrone Swoopes lifted the Longhorns to victory when he scored on a 6-yard run after Notre Dame kicked a field goal to open the second overtime. Texas ran nine plays over the two overtime sessions, and Swoopes recorded a rushing play on four of those snaps. On his final carry, Swoopes avoided four tackles before he leaped from the 3-yard line and into the end zone.

Of Texas’ 70 tackles, seven were recorded behind the line of scrimmage. The last of those was recorded by senior defensive tackle Paul Boyette Jr., who stuffed Notre Dame running back Josh Adams for a 2-yard loss on a second-down attempt in the second overtime. On the ensuing play, third-and-7, Notre Dame threw incomplete and was forced to kick a field goal. Texas then erased that 3-point deficit with Swoopes’ touchdown run.

3. Welcome to the receiving corps

We know how Shane Buechele and Swoopes performed while leading the offense, but what about the two quarterbacks who moved to wide receiver? Redshirt freshman Kai Locksley did not play, but sophomore Jerrod Heard caught two footballs. One of those was a 68-yard catch that set up a short second-quarter score by Swoopes. Heard beat defensive back Shaun Crawford to a deep ball down the middle of the field, but he was tripped up at the 1-yard line.

Notre Dame may have called foul after a targeting penalty wasn’t assessed on this third-quarter play, but DeShon Elliott’s jarring hit on Torii Hunter, Jr., in the end zone prevented a touchdown and stalled a run of points by the Fighting Irish. Notre Dame has scored on two straight drives to pull within 31-28, but the Fighting Irish then had a field goal blocked by Naashon Hughes after Elliott forced Hunter to drop that lead-taking touchdown catch.

5. Becker gets his kicks

The biggest kick was not Trent Domingue’s 25-yard field goal or one of Michael Dickson’s booming punts. After the Texas bench was flagged for sideline interference on Notre Dame’s game-tying return of a blocked extra point, the Longhorns were forced to kick off from their own 20 with 3:29 left. Mitchell Becker launched a 69-yard kick into Notre Dame territory, and Texas’ coverage team stopped an 18-yard return at the 29. Notre Dame went three-and-out on the ensuing drive.