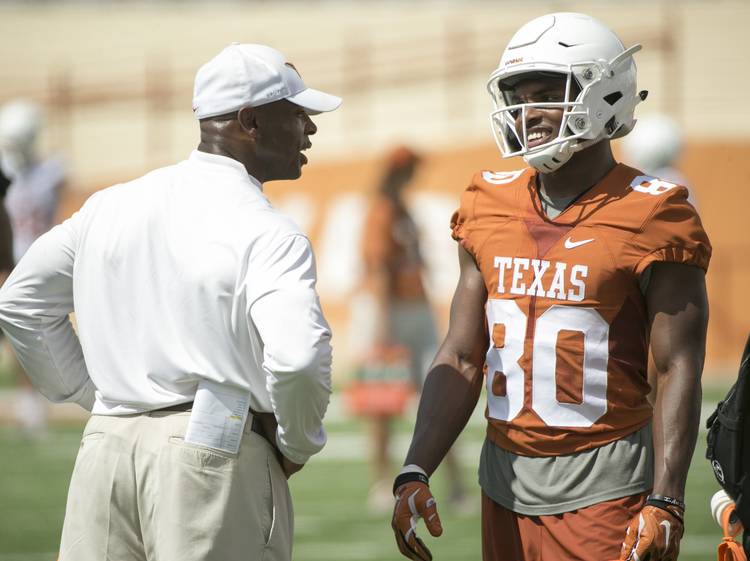 After an August full of notoriety, Texas freshmen Collin Johnson and Devin Duvernay were oddly absent from the double-overtime win over Notre Dame.

Neither player had any role of consequence. Johnson came onto the field once and then left after a timeout. Duvernay lined up on special teams.

“I think Collin got a couple plays,” offensive coordinator Sterlin Gilbert said. “Again, our ultimate goal every time we step on the field is to win. We’re making decisions based on that. Those guys are very, very talented.

“It’s a long season, and those guys, before this thing is over, are going to contribute to what we’ve got going on offense.”

Johnson, a 6-foot-6 standout, is listed behind junior Armanti Foreman on the team’s depth chart. Foreman had a spectacular 19-yard touchdown catch in the first quarter and finished with three catches for 25 yards.

Duvernay is listed behind senior Jacorey Warrick, who had two catches for 35 yards.

Both freshmen clearly hold a special place in coach Charlie Strong’s heart. Johnson was allowed to switch to jersey number 9 and Duvernay switched into number 2 before the game. It’s likely both are champing at the bit.

“You have 12 seniors and then you have enough young guys who feel like they have the edge,” Strong said. “The older guys have been able to just kind of manage those egos, and telling those guys, ‘Hey, listen, your turn’s going to come. It’s our turn now, but we need your help.’”

Avoiding too much praise: Strong has lamented that social media is the “downfall of society.” But he can’t take away the players’ cellphones.

Defensive tackle Chris Nelson said he received a text on Tuesday with news that the Longhorns landed 11th in the Associated Press Top 25, the school’s first appearance in that poll since 2013.

Asked if he was surprised, Nelson said, “Yeah, of course. But we try not to focus in on that. You know you’re going to have a lot of people coming in and out trying to motivate us or give different say-sos. In the locker room, we have to keep it tight with each other.”

Texas safety DeShon Elliott blasted Hunter in the end zone, and replays indicated Elliott could have been flagged for targeting. ACC officials on the field did not throw a flag.

Beginning this season, replay officials have the authority to enforce targeting from the booth. However, the Big 12 supervisor of officials told the American-Statesman on Tuesday the league’s replay official upstairs determined “the action did not feel the action warranted an egregious foul.”

Sebastian collided with a teammate and UT quarterback Tyrone Swoopes in double overtime.

After some touch-ups, Tyrone Swoopes now oversees everyone that comes through the door at Moncrief. pic.twitter.com/ko2BnFhwNl

Greenlee did not practice on Tuesday, according to the El Paso Times.

Greenlee completed 15 of 27 passes for 229 yards and three touchdowns in UTEP’s season opener. Running back Aaron Jones was the real star, though. He rushed for 249 yards and scored twice in a 38-22 win.

Briefly: Gilbert said there were not many communication issues with other assistants or the players, given that it was his first game calling plays from the UT sideline. … As for freshman center Zach Shackelford’s few bad shotgun snaps, Gilbert said, “Nothing that’s not fixable.” … Granted, it was only one game featuring double overtime, but Texas ranks 19th nationally after the first week having run 86 plays against Notre Dame. “There’s still room for improvement, but at times Sunday, we had decent pace,” Gilbert said.

Texas returns to AP poll for the first time since 2013

72 hours in the state of Texas: It was one hell of an opening act