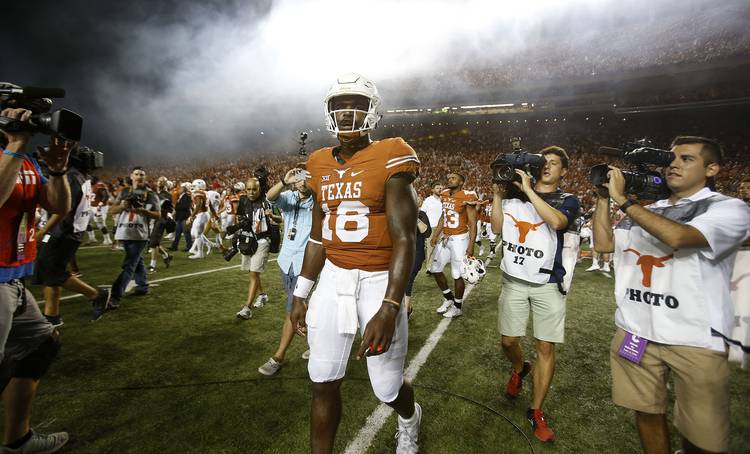 If you cheer for college football teams from the great state of Texas, you enjoyed a damn fine opening weekend.

What could have been more heavenly than two double-overtime wins from the state’s flagship programs of Texas and Texas A&M, played in front of crowds of more than 100,000 in Austin and College Station? Or an underdog in Houston slaying a college football titan, telling a national audience: Why not us?

In Waco, a program saddled by national scandal gave fans reason for hope of a warm resurrection. In Fort Worth, the vaunted Horned Frogs survived a Jackrabbit scare, but held on for an 18-point win. And in Lubbock, Texas Tech scored 69 points.

Who’ll end up controlling the state this season? Every top Texas team has something to overcome, questions to answer. But the state’s 12 FBS teams went 10-2 to open the season, with one of those losses coming to a fellow state school. Rice (to Western Kentucky) and North Texas (to SMU) were the lone losses. On Tuesday, five teams — No. 6 Houston, No. 11 Texas, No. 15 TCU, No. 20 Texas A&M and No. 23 Baylor — were ranked in the Associated Press Top 25 poll.

No one was giddier with his expansive college football experience than Texas Gov. Greg Abbott, who saw three games in person Saturday and Sunday.

Abbott tossed the coin for Saturday morning’s Houston-Oklahoma game at NRG Stadium, then made it up to Arlington for Saturday night’s Alabama-USC game at AT&T Stadium. He cheered for the Men of Troy since his daughter, Audrey, goes to school there.

Then Abbott, the University of Texas grad, was back in Austin for Sunday night’s Texas-Notre Dame game at Royal-Memorial Stadium, handling the coin flip and serving as the Longhorns’ honorary captain.

After UT’s dramatic, double-overtime victory, Abbott positioned himself near the south end zone goal post so that he could slap high fives and shake hands with every Texas player or coach who dashed by.

All Abbott wanted to talk about was the Longhorns’ grit. He said Sunday night’s win almost was as exciting as Texas’ national championship win over USC in the Rose Bowl 10 years ago. Emphasis on almost.

Sunday night’s game boasted it all. Texas’ new Bevo made his debut. So did Shane Buechele, the first freshman quarterback to start for Texas since Bobby Layne. Longhorn glitterati from all sports were there. The DKR crowd of 102,315 was a school record and the largest crowd in the state to watch an opener last weekend. It bested Texas A&M’s crowd at Kyle Field, which held 100,443 on a blistering hot Saturday for the Aggies’ overtime win over UCLA.

The crowd was out of its mind with either delirium or despair, depending on the hit, penalty, kick or score. Teammates piled on quarterback Tyrone Swoopes after he scored the winning touchdown. Then players hoisted coach Charlie Strong over their heads and crowd-surfed him to where television cameras awaited.

Back in the bizarro world that is social media, Reggie Bush, the former USC star who lost to the Longhorns 10 years ago, was posting his admiration for Swoopes, the game hero.

“Swoopes out there running like Jim Brown,” Bush tweeted.

Texas fans of a certain age grew up hating the Fighting Irish, always rooting for their opponent, with maybe an exception for when Notre Dame played Texas A&M in a bowl game. Notre Dame, after all, beat Texas in the 1971 Cotton Bowl, snapping the Longhorns’ 30-game winning streak and costing them a consecutive national championship.

And it was Notre Dame that smashed top-ranked Texas again at the end of the 1977 season, a 38-10 Cotton Bowl trouncing that cost the Earl Campbell-led Longhorns another national title. So it would have been apropos if the football gods showed mercy, allowing a big win over the Irish to reverse those previous misfortunes.

The day before, in College Station, Aggie fans suffered through the same game-day extremes as their frenemies would in Austin. A&M built a 15-point lead over the 16th-ranked Bruins, only to blow the advantage in the final five minutes of regulation.

UCLA quarterback Josh Rosen had upset A&M’s loud and proud fan base earlier in the week when he remarked that any crowd bigger than 50,000 sounded the same. Throughout the afternoon, A&M’s student section chanted, “50,000 … 50,000.”

The Aggies won 31-24 in overtime as new quarterback Trevor Knight, a native Texan and Oklahoma transfer, scored a touchdown on a fourth-down zone read.

“It’s one that I’ll remember forever because it’s a big-time game and we won in overtime,” Knight exclaimed. “There’s a lot of memories from that but it was my first game as an Aggie and to come out and get that win at home and play in front of the 12th Man, it’s special.”

Defensive end Myles Garrett, who might be the top player selected in next spring’s NFL Draft, sounded as if he gave motivational speeches for a living.

Conversely, coach Kevin Sumlin barely had a voice. His Aggies have now beaten a ranked opponent in their last three season openers. Maybe momentum from this game will swell and carry through October and November, times his past teams have struggled. After opening weekend, the SEC schedule doesn’t seem as daunting, save for an Oct. 22 road date at Alabama.

TCU coach Gary Patterson was in a foul mood for much of Saturday night as South Dakota State stayed competitive too long for his liking. It especially irked him that Kenny Hill, his new quarterback, was smiling after he threw interceptions on back-to-back first half drives.

Hill, the one-time starter at A&M, explained he was smiling to keep his teammates upbeat. And he hadn’t played in an actual game since Oct. 18, 2014. There is such a thing as competitive brain rust.

Back in Houston, the Cougars were auditioning for both a Big 12 invitation and a lofty poll ranking by stunning defending league champion Oklahoma, 33-23. Houston athletic director Hunter Yurachek told reporters that if Houston joins a Power 5 conference, coach Tom Herman will receive a $5 million bonus.

More than 1,000 students endured late August heat a week ago to as they camped out on campus for tickets. The game was worth the sweat and discomfort.

Baylor had the honor of kicking off the in-state action. Fans were somewhat late arriving to McLane Stadium last Friday night. The Bears are the first college football program in the country to install metal detectors at all gates. So it took longer for a fan to grab a Pepsi (McLane Stadium no longer is Dr. Pepper country) at the concession stand and find their seats.

A number of reporters from national media outlets were in the press box. Normally, there wouldn’t be much media attention for a Bears game against Northwestern State, a mid-level FCS school. But this was Baylor’s first game after the national scandal this past spring, the one that led to the firing of popular head coach Art Briles and the eventual parting of ways with school president Ken Starr.

Jim Grobe, who hadn’t coached a game since 2013, was pulled out of retirement to serve as the team’s caretaker for this season.

How did the fans react to the team? With sustained loud applause. Quarterback Seth Russell, who enjoyed his first, live-game action since suffering a neck injury last October, drew the loudest cheers.

The Baylor Line gathered before the game for their big entrance. They’re the school freshmen. They come to the games wearing bright yellow T-shirts. And they flow onto the field from the south end zone like gobs of neon honey to form a gauntlet to welcome the team.

It’s difficult to get an exact head count, but the Baylor Line literally extended from the end zone gate to the middle of the pedestrian bridge that runs over the Brazos River, connecting the campus to the stadium. In years past, Starr headed up the group, running down the field with the teen-agers.

On Friday, the senior football players led the yellow masses.

“That was real cool,” said Baylor cornerback Ryan Reid, who has emerged as a calm spokesman for the Bears since the scandal broke.

“It was something new. We really didn’t know what was going on. But I was just hoping they didn’t run us over from the excitement they had. But it was real fun. I like it a lot.”

The crowd roared its enthusiasm as Baylor clicked off 55 points before the Demons scored their lone touchdown late in the third quarter. After just 20 minutes off the game clock, Russell shed his shoulder pads and happily watched from the sideline.

“There’s still a buzz,” said Bears fan Cory Schibler, who graduated from Baylor’s Truett Theological Seminary. “A large majority of the people are still supportive. All the stuff that happened was terrible and it’s a conversation we need to have. But at the same time, it’s something that needs to be addressed at all college campuses across the country.”

Omari Head, another graduate from Truett Seminary, nodded his head in agreement.

At the same time, Head said he was supportive of his Bears.

“I think they can do great things this year,” Head said. “I’m glad they’re here. I’m glad the system stayed.”

It seemed that all mention of Briles was scrubbed from the scenic stadium. Yet his presence was everywhere, since he recruited and groomed all this year’s players. His coaching staff, including his son, Kendal, and son-in-law Jeff Lebby, all still are employed.

Kendal Briles, Baylor’s offensive coordinator, used a pen to write “CAB” for “Coach Art Briles” on the back of each of his hands. He didn’t let Grobe know beforehand of how he was honoring his dad.

Grobe was asked about the gesture after the game. He said he didn’t have an issue with what Kendal did. He also didn’t know about it till a reporter asked him.

“Kendal’s special, KB is special,” Grobe said. “And … to think about him losing Art as his head coach and as his dad. It had to be tougher on KB than anybody. And he’s been nothing but class. He’s been a true gentleman this whole time, and he’s on fire to coach these guys.

“So I had no problems with that whatsoever. If you don’t love your dad, something’s wrong.”

The Longhorns, Aggies and Cougars will step to the back of the national spotlight this weekend, meeting schools that aren’t as big-time as the ones they faced in their openers. UTEP isn’t Notre Dame. A&M follows the Bruins with FCS school Prairie View. Houston faces Lamar.

Baylor ups its competitive game, at least by a notch, with a home contest against SMU. Texas Tech and TCU, it’s your turn to sustain the state’s mojo.

Tech travels to the desert for a prime-time telecast against Arizona State. Coach Kliff Kingsbury, always cool, always chill, prepped his team this week by letting them reenact a WWE matchup between John Cena and Mike “The Miz” Mizanin.

Coaches will trot out all the tricks for state supremacy and, hopefully, another damn fine weekend of college football.

Where were Collin Johnson and Devin Duvernay vs. Notre Dame?