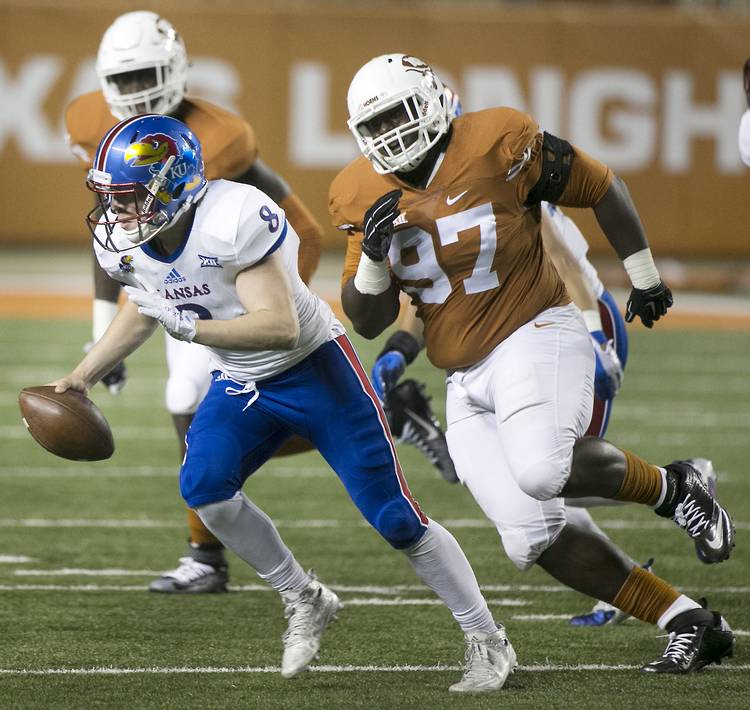 Tuesday was full of surprises for Texas sophomore Chris Nelson.

The 297-pound defensive tackle said Tuesday night that he was surprised when he received a text message earlier in the day saying the Longhorns (1-0) were ranked 11th in the Associated Press’ weekly poll. He also was bewildered that his efforts in Sunday night’s 50-47 double-overtime win over Notre Dame had earned him the Big 12’s defensive player of the week award.

“I knew I had made some big plays, but I just didn’t know it was going to come that quick,” said Nelson, who logged a team-high eight tackles against the Fighting Irish.

It was Nelson’s first career start, although he had a coin toss to blame for that. Nelson was part of the same 2014 recruiting class as junior defensive tackle Poona Ford — both players were originally committed to Louisville before Charlie Strong was hired at Texas — and defensive coordinator Vance Bedford said a coin was flipped to decide which would redshirt that season. Nelson ended up redshirting.

He appeared in a reserve role in 2015, compiling seven tackles and a stop behind the line of scrimmage. Now a key part on an inexperienced defensive line that also features Ford and senior Paul Boyette, Jr., Nelson — the player once nicknamed “Heavy” by former Longhorns lineman Hassan Ridgeway — has credited his focus for his on-field development.

“I had a lot of players ahead of me, so I had to take the back road a couple times and just key in on things and better myself for the game,” Nelson said.

Nelson said he feels he can improve his pass-rushing abilities, but the fine-tuning of his power and pad level had him feeling that “I’m good at run-stopping.” That latter statement should get tested this weekend game against UTEP. Miners running back Aaron Jones currently leads the nation with his 249 rushing yards last week against New Mexico State. Texas surrendered 206 rushing yards against Notre Dame.

When Nelson de-committed from Louisville following Strong’s exit, the Lakeland, Fla. product considered staying home before he signed with Texas. Nelson recalled his friends warning him that Texans would be “cocky,” but he feels that he fits in with the Longhorns.

That isn’t to say that Nelson doesn’t boast about his ties to the Sunshine State, a task that is much easier when Nelson and Tallahassee-raised receiver John Burt (111 receiving yards) perform like they did against Notre Dame.

“I still hold it down in the locker room all the time,” Nelson said. “I just have to tell them here and there, Florida is still on top. Being from Florida but you’ve got all the Texas guys in there, but I still give them their props when it’s due.”