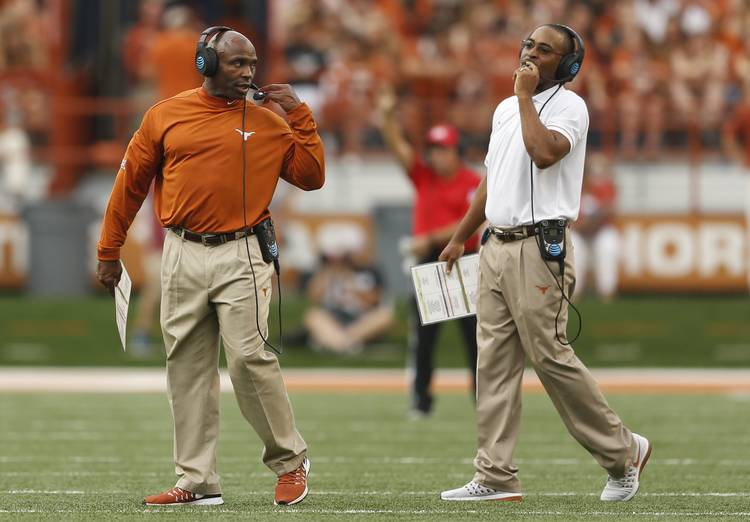 Irish running back Josh Adams had three catches for 46 yards on plays where the Longhorns pinned their ears back and came charging forth.

Bedford said Notre Dame utilized the same strategy that Kansas State did last year. Whenever UT defenders got upfield too fast, the quarterback dumped the ball off into the just-vacated space.

As for the Texas run defense, Tarean Folston had a 54-yard run on the Irish’s first drive. Quarterback DeShone Kizer also got loose around the right end for a 29-yard touchdown. Outside of those two plays, Notre Dame had 123 yards rushing on 44 carries (2.8 yards per attempt). Defensive linemen Chris Nelson, Charles Omenihu and Paul Boyette Jr. all finished the game among the top four tacklers.

“You look at their offensive line,” Bedford said. “They look how an offensive line should look. They’re going to have some guys play in the National Football League.”

Moving on to UTEP: Bedford fielded several questions on Wednesday about how players would respond to their new No. 11 ranking. Texas is just days away from its second opponent, a pesky UTEP squad coming off a season-opening win over New Mexico State.

“If you’re in the defensive meeting room, there’s not a doubt in their mind that they’re not back,” Bedford said. “I can tell you that right now. One game, that’s all it is, one game. It’s great that everyone’s loving us right now and it’s a big win versus Notre Dame. There’s nobody who can be more excited than me, because I played here.”

Bedford was just getting warmed up.

“That’s one game. UTEP doesn’t care,” he said. “I can hear the coach from UTEP right now saying, ‘They’re out on Sixth Street right now still celebrating the Notre Dame game. We’re gonna sneak in there quietly, we’re gonna run the football, we’re gonna keep that offense off the field, we’re gonna ground chuck, we’re gonna hit ‘em in the mouth. They’re not going to be ready for what we’re gonna bring to the table.’

“I can hear what they’re saying right now. You know why? I’m saying that to our guys right now.”

Reviewing Elliott hit: Beginning this season, replay officials in the press box have the authority to enforce targeting penalties even though it may not be called on the field. Replays indicated UT safety DeShon Elliott could have been called for targeting when he blasted Torii Hunter Jr.

Hunter is now undergoing concussion protocol back in South Bend, Ind., and his status for Notre Dame’s home opener against Nevada on Saturday is unclear.

“Never lead with your head, and you go back and put in slow motion, he led with the shoulder,” Bedford said. “It think that’s key. That call could have gone either way. That day, it went for us.”

Last season, Texas was on the other end of a 50-50 call when safety Dylan Haines was ejected for targeting against California.

“He was at practice yesterday,” Bedford said. “He wasn’t in practice, but he was there. So as far as I know, it’s day to day.”

72 hours in the state of Texas: It was one hell of an opening act

No longer a surprise, Texas’ Chris Nelson steps into spotlight