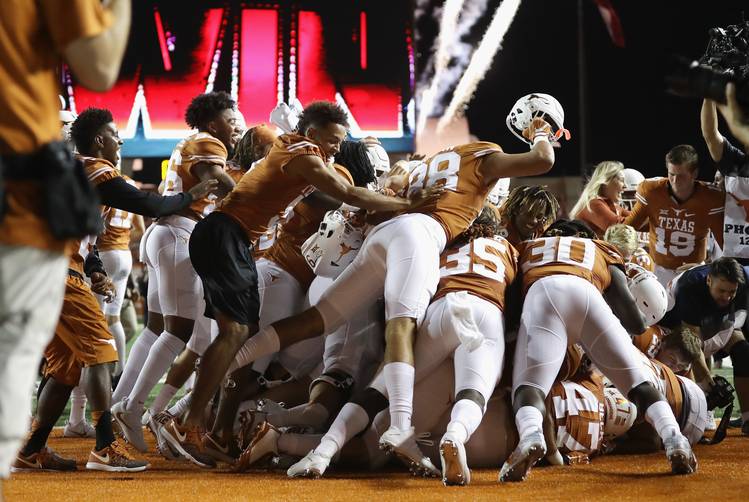 Some inside the Texas athletic department felt Sunday’s win over 10th-ranked Notre Dame was a confirmation of sorts. They believe the tide is turning, and the Longhorns are back on the road to superpower status.

Charlie Strong has said it multiple times himself. Once UT’s football program turns the corner, he believes, the whole athletic department will take off.

Saturday’s home game against UTEP won’t have the same buzz the Notre Dame game did. But the now 11th-ranked Longhorns (1-0) must build on their momentum. Crazy as it sounds, Strong has never been two games over .500 during his UT tenure.

“I do think the tide is turning,” Aston said. “It’s a big weekend for us.”

On the football recruiting front, 247Sports reported earlier this week that more than 10 recruits currently committed to other schools have reached out to the UT coaching staff. Temple defensive end Taquon Graham pulled the trigger on his decision just hours before the Notre Dame game.

Graham committed to UT via a text to Strong around 2:30 p.m. Sunday, about four hours before kickoff. Strong called him back almost immediately. “He said, ‘OK, make sure you watch the game tonight and watch us get the W,’” Graham said.

The current Longhorns noticed that all the football recruits at last week’s game were energized.

“Looking at those guys just sitting back and watching us play, that made them more jittery than anything,” linebacker Malik Jefferson said. “So next week, they want to get out there, get in their playbook and make sure they’re ready to go.”

Strong spent the week capitalizing on national media wanting to discuss the Horns. During a late-night appearance on ESPN’s SportsCenter, Strong said, “We had a team meeting today and at that time, I told our guys, ‘Now the stage gets bigger. Now that you are where you are, and everybody’s going to remember that Notre Dame game, Now let’s go build on it.’”

All that said, Texas had better be ready against UTEP; the Miners will be without starting quarterback Zack Greenlee, who was injured in last week’s win over New Mexico State. Backup quarterback Kavika Johnson will start.

The Texas defense faces a tremendous task in stopping Aaron Jones, a 5-10 junior schooled in the art of now-you-see-me, now-you-don’t. Jones leads all FBS rushers after week one with 249 yards. Last season against Texas Tech, he had a 91-yard scoring sprint, the longest run in UTEP history.

All Texas defensive coordinator Vance Bedford had to do this week was turn on UTEP game film to get his players’ attention.

“Yesterday, people said you were nobody; now all of a sudden, you’re somebody,” Bedford said. “Don’t believe that. We won one football game. That doesn’t mean a whole lot.”

One of the most intriguing aspects of this matchup will be in watching the UTEP defense. The Miners are the first team that’s had time to breakdown UT’s dual quarterbacking system. Tyrone Swoopes and Buechele combined for 366 total yards against the Irish. Swoopes was running; Buechele was gunning.

Watch to see if UTEP shifts its linebackers to one side when Swoopes comes in to guard against the 18-Wheeler. Or will the Miners play it straight no matter which quarterback Texas sends onto the field?

In the coming weeks, Big 12 defensive coordinators will be watching all this game film to see what worked and what didn’t.

“You’re always interested to see what changes we’ve got going on,” offensive coordinator Sterlin Gilbert said. “That’s the life we live in as coaches. It’s about being able to adjust and adapt and see and make changes.”

Swoopes didn’t make any lifestyle changes this week after scoring the game-winner against the Irish and winning back the UT fan base. He may not delve back into social media anytime soon.

“Probably not,” Swoopes said. “I know just as fast as everybody can lift me up, they can put me right back down. So I probably won’t get it back.”

Same goes for pollsters. As quickly as the Horns went from being unranked to 11th, they can fall just as fast.

“We don’t really care about the polls,” defensive tackle Chris Nelson said. “We just want to win games and move forward in that direction.”