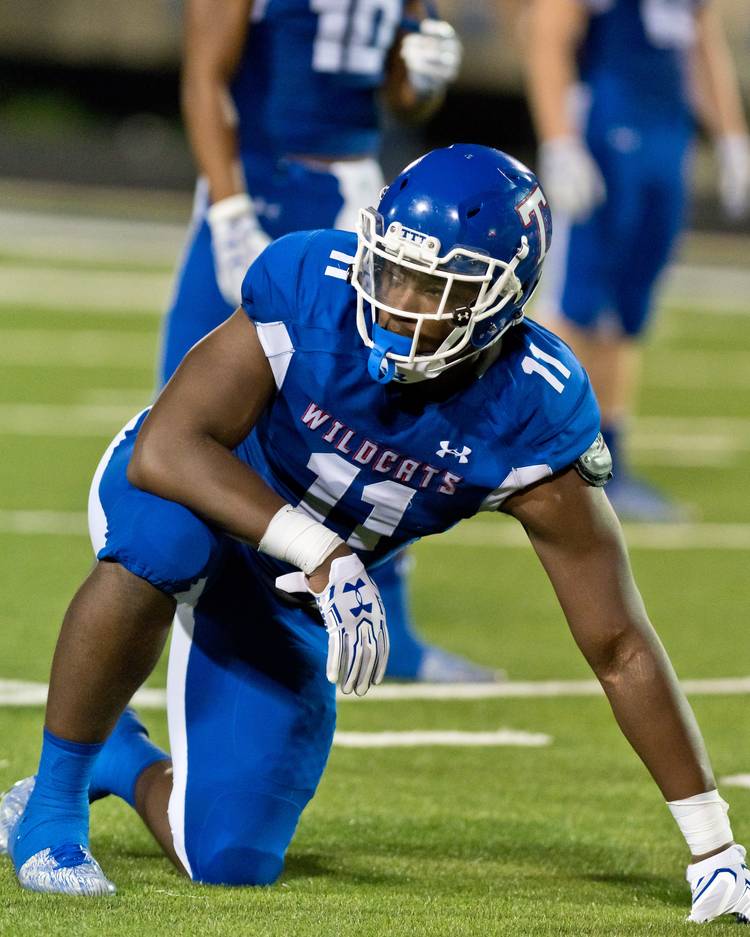 TEMPLE — About four hours before Texas kicked off its season against Notre Dame, around 2:30 p.m. on Sept. 4, Taquon Graham texted Charlie Strong to let him know he was going to commit to the Longhorns.

Graham wasn’t expecting an immediate text back. Strong easily could have had more pressing things on his mind before the game Texas would eventually win 50-47 in double overtime. But Graham, a four-star defensive end from Temple, instead got a phone call back.

“I was surprised that he actually picked up the phone that close to game time and everything,” Graham said. “I talked to him and I told him I wanted to make (my commitment) official. He said, ‘OK, make sure you watch the game tonight and watch us get the W.'”

It was a brief conversation that further reminded Graham, ranked 39th on the American-Statesman’s Fabulous 55, why he picked Texas from a pool of more than 25 offers.

“It was a big deal,” Graham said. “I was always looking for that good vibe from something you like and something like the family atmosphere we have around here (at Temple).”

Geography — Temple is only an hour from campus — and on-field factors contributed to his commitment. Graham, who had 67 tackles and 14 sacks as a junior last year, thinks he’ll fit well in Texas’ four-man front, but making a family connection was the biggest thing for the 6-foot-3, 255-pound prospect.

Several schools preached family and community, but Graham said Texas acted it out more than any other program. Graham was courted by dozens of defensive line coaches and area recruiters, but he said he really built a connection with the entire coaching staff at Texas.

“They were real people. They were real about their outside lives and about what they do off the field and on the field,” Graham said. “All the Texas coaches pitched in (on recruiting), even the offensive guys, and that’s what they kind of do different than the other schools. It’s not just the guy for your position, so it means that much more that the whole staff has an interest in you.”

Texas was always near the top of his list, he said, but Graham took a patient and calculated approach.

Aided by his mother, Forestine Thompson, and older brother, Broderick Thompson, Graham would sit back and listen closely to recruiters. For Graham it was important to make the right decision, even if he was feeling pressure to commit earlier in the recruiting process.

“I think it was weighing on him a little bit, but he never wanted to be the kid to de-commit and break something like that,” Temple coach Scott Stewart said. “From the beginning we talked about him making the decision on his time and terms. And Texas was a school that really respected that, they didn’t play any games with him.”

The entire thing was a learning process for Graham. He didn’t know much about recruiting before his offers started rolling in, and initially he thought he’d only have his pick from “two or three schools.”

That’s why Sunday was a “perfect day” for Graham.

Other than a select group of people, including Strong and his family, nobody knew about his commitment. He was able to watch the Texas game on television in anonymity before publicly tweeting his decision Monday afternoon.

Betting on the Horns: For Texas, 30 points is a lot to give UTEP