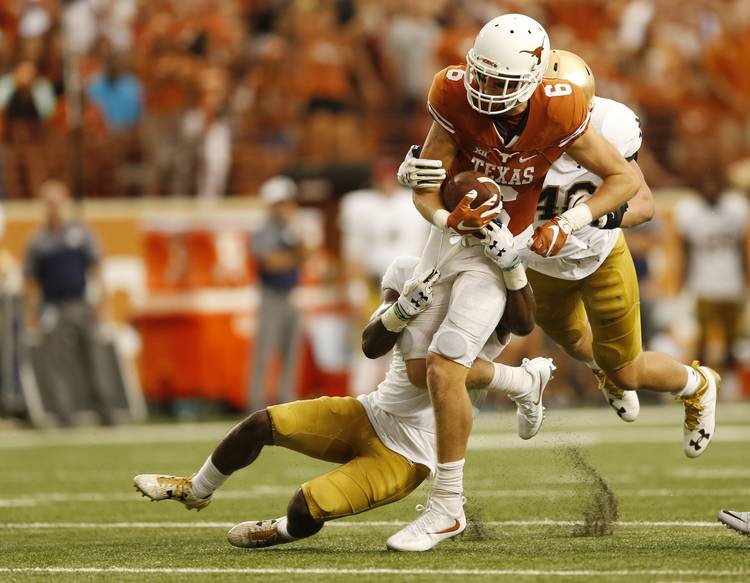 Aaron Jones vs. the Texas defense

In his first game back after a season-ending injury last year, UTEP junior Aaron Jones rushed 31 times for 249 yards and two touchdowns. Yes, Jones’ performance came against New Mexico State. Still 249 yards is 249 yards, and no one in the country rushed for more in Week 1. According to Pro Football Focus, Jones slipped 16 tackles in UTEP’s 38-22 win. That might be the biggest concern for Texas after defensive coordinator Vance Bedford told the media on Wednesday that his defense missed 14 tackles against Notre Dame.

Aaron Jones (RB, UTEP) forced more missed tackles against NMSU (16) than any player in any week for the last 2 years pic.twitter.com/02VvqDDip0

Two of UTEP’s offensive linemen have 26 starts on their résumé, and fullback Darrin Laufasa has started in 33 games. The Miners have enough depth on their offensive line that junior Derek Elmendorff, who has started 19 games, is the backup left guard. Texas doesn’t have as much experience on its defensive line, but the Longhorns are growing up quickly. Sophomore tackle Chris Nelson just earned the Big 12’s defensive player of the week award in his first-ever start.

Oliver, Heard and the new guys vs. UTEP’s secondary

John Burt and Armanti Foreman are established presences in Texas’ receiving corps, but how about junior Jake Oliver and sophomore Jerrod Heard? Oliver caught the first three passes of his career — two were for first downs — against Notre Dame, and Heard celebrated his move from quarterback to wide receiver with a 68-yard catch that set up a touchdown. Senior Jacorey Warrick also made his first start, and a trio of freshmen are listed as backups on the depth chart. UTEP has allowed 3,386 passing yards in its last 13 games, or an average of 260 yards per game.

Buechele’s debut was a good one. He earned Big 12 newcomer of the week honors after completing 16 of his 26 attempts for 280 yards, two touchdowns and one interception. Now, though, opponents will have time to scheme for Buechele since he’s Texas’ pronounced starter and game film exists. Can Tom Mason, who joined UTEP’s coaching staff this year after previously coordinating defenses at schools like Hawaii, SMU, Nevada, Northern Iowa, Boise State and Portland State, find a way to prevent Buechele from picking up another award?

Texas coaches have stressed this week that neither they nor their players are overlooking UTEP, but can the same thing be said about the fans? Despite its first appearance in the national rankings since 2013, and despite the fact that the next home game at Royal-Memorial Stadium won’t be until Oct. 15, Texas officials said Wednesday  that there were still around 8,000 tickets available. It’s unlikely that the atmosphere for the Notre Dame game will be matched for UTEP, but will Texas fans even try?