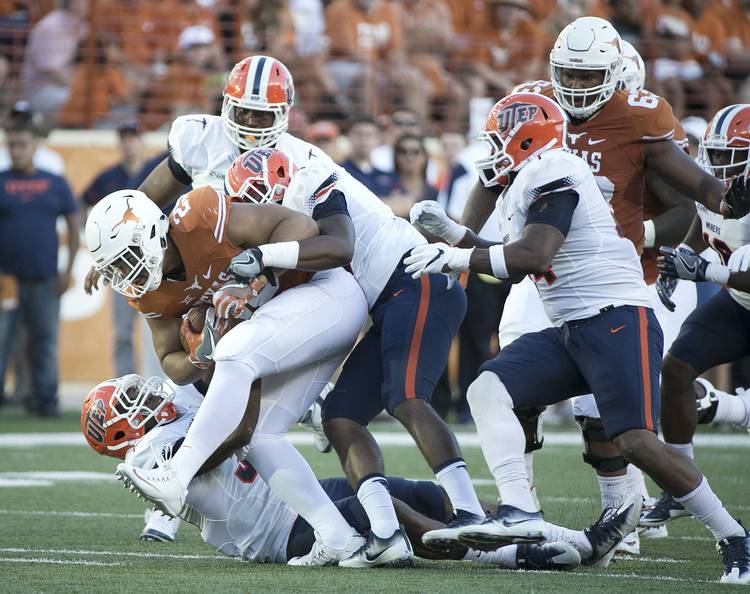 Texas's Chris Warren III is tackled by UTEP during the first quarter of their game at Royal Memorial Stadium on Saturday, September 10, 2016. DEBORAH CANNON / AMERICAN STATESMAN

On Saturday morning, we asked four questions about the Texas-UTEP matchup.

Aaron Jones found it harder to find the holes and yards against Texas than he did against New Mexico State, when he rushed for 249 yards and two touchdowns to actually spend one week as the nation’s leading rusher. The junior finished with 18 carries for 123 yards, and if you take away the 51-yard touchdown that he broke, he would have finished with 72 yards. Going back to 2015, four straight teams had rushed for at least 200 yards against Texas. That streak ended Saturday night.

Not having D’Onta Foreman affected things. Tyrone Swoopes, the hero of the Notre Dame win with his 18-Wheeler short-yardage package, was a non-factor; the senior quarterback attempted one pass, completed it, but it gained only 1 yard. And he had only two carries on the night. Shane Buechele, however, had another strong night — 244 passing yards, four touchdown throws. We saw Jerrod Heard take a snap from the wildcat formation. But Buechele didn’t take as many long shots downfield like he did against the Irish; one of the ones that he did, however, was a 46-yard touchdown pass.

HOW DID TEXAS’ OFFENSIVE LINE LOOK?

It was perhaps hard not to overlook the Miners; UTEP, after all, has posted only one winning season since 2006, Texas was a 30-point favorite on Saturday and this game was sandwiched on the schedule between the huge opening win over Notre Dame and an enticing road swing. But the Longhorns covered the spread, looked effective on offense and dominant on defense. The 2-0 record is a good look for Texas, which now heads west for a game at Cal next Saturday.

Texas vs. UTEP: The expanded boxscore

Third and Longhorns: Inside Texas-UTEP