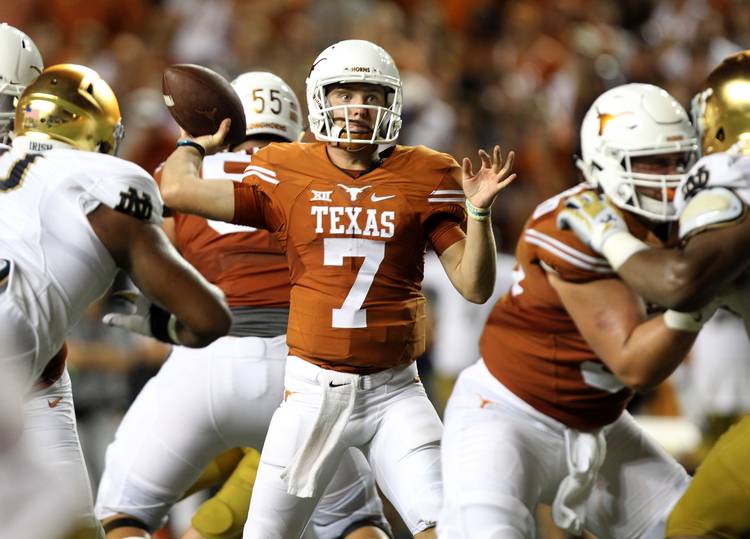 Four questions facing No. 11 Texas in Saturday’s game against UTEP:

Enough has been written about Texas’ matchup with UTEP running back Aaron Jones, who collected 249 of the 289 rushing yards compiled by UTEP in its season opener. The intriguing questions, though, are the intriguing questions. Notre Dame rushed for 206 yards on 46 attempts to become the fourth straight team to hit the 200-yard mark against Texas, so can the maturing Longhorns stop that streak?

Will Buechele run or will Swoopes pass?

Shane Buechele threw 26 passes against Notre Dame, but the freshman ran the football only five times. Meanwhile, Tyrone Swoopes recorded 13 rushing attempts and one throw. Offensive coordinator Sterlin Gilbert has options against the Miners — mix it up, rely on running backs D’Onta Foreman and Chris Warren III, or keep the playbook close to the vest with games at Cal, Oklahoma State and in Dallas against Oklahoma coming up.

How will Texas’ offensive line look?

Neither Buechele nor Swoopes were sacked in the season opener. That’s impressive considering starting offensive linemen Kent Perkins and Tristan Nickelson both left the game with injuries. The Longhorns didn’t update Perkins’ or Nickelson’s injury status, but it they can’t go at right guard and right tackle, then the offensive line will have to be juggled. Brandon Hodges probably would be used at guard. Fixing the tackle spot would be a bit trickier.

Sandwiched in between the thrilling triumph over Notre Dame and next week’s road trip to the West Coast is UTEP, a program that has posted one winning record since 2006. Texas is a 28 1/2-point favorite in this game, and the Longhorns lead the overall series 4-0. Will Texas put the Miners away early, or can the Miners catch the 11th-ranked Longhorns napping?

The Eyes of Texas: Three Miners the Horns will be watching