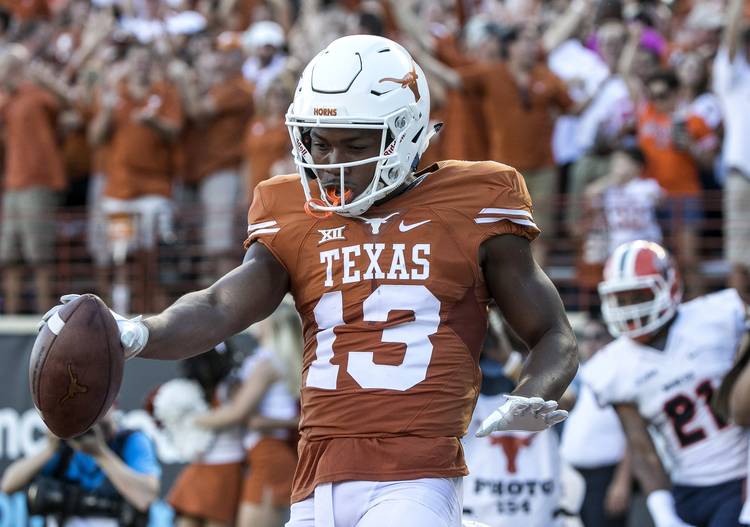 Jerrod Heard turned 21 on Saturday, and more than 92,000 people at Royal-Memorial Stadium — including a quarterback who beat him out for a starting job he once coveted — joined in the celebration.

Heard hauled in six catches in the 41-7 blowout of UTEP, including touchdown catches of 29 and seven yards that were the first of his career. Holed up in the team hotel for much of the day, Heard said he received a hug from head coach Charlie Strong and claps from his teammates. The touchdown catches were two gifts to himself, but did they make this the best-ever birthday for Heard?

“When I turned eight, I went to Sea World. I don’t think (anything) could top that,” Heard said. But then again, he did get to pet Shamu that day.

Heard entered the summer as one of the Longhorns’ quarterback candidates, but he was unable to beat out Shane Buechele or Tyrone Swoopes. The last time Heard lined up at a position other than quarterback was in middle school, but he eventually found himself in Texas’ receiving corps.

Less than 10 days away from the one-year anniversary of a school-record 527-yard performance against Cal, Heard on Saturday made a statement at his new position. He put the Longhorns on the scoreboard in the first quarter when he out-jumped Devin Cockrell at the edge of the end zone for a 29-yard pass from Buechele. In the fourth quarter, Buechele found Heard again for Texas’ final score.

“Just like everybody else on this team, we all want to play,” said running back Chris Warren III, who got the start with D’Onta Foreman out with an injury. “I feel he just wanted to get out there and play and help the team, and I think he’s doing a good job.”

Heard is still on the team’s quarterbacks group text, and he had a five-yard carry out of a wildcat snap in the second quarter. But he said after the game that the transition to wide receiver has gone well.

“All you’ve got to do is beat the defender down the field and go catch the ball,” he said. However, he was tripped up one yard short of the end zone on a 68-yard catch against Notre Dame. That would have given him three touchdown catches on the season.

“I was so mad the whole week,” Heard said. “The whole week at practice, I was practicing high-knees every time I’d catch the ball close to the end zone. I was really anxious to get in the end zone and get my first TD as a receiver.”

Strong lauded Heard’s energy and practice habits, and Buechele noted he was throwing to a teammate that “learns well, and he learns quick.” Heard was listed as Jake Oliver’s backup at one of the inside receiver positions against UTEP, but only Jacorey Warrick’s seven receptions bested his six.

Only Warrick, who has nine catches so far, has caught more passes than Heard. The 6-3 sophomore has eight.

“I don’t know if I could say that (we expected this immediate success),” offensive coordinator Sterlin Gilbert said. “You might be wishing or hoping that you do, but you just don’t know what that learning curve’s going to be when a guy makes a transition like that. … For him to go out and have the success that he’s found and that he’s made in the last two games has been exciting.”